This has been around for a while now, I was wondering whether it still exists? Sounds like a heartstopper! 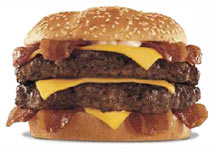 The "Monster Thickburger" will cost about $5.49, Hardee's said. But chowing down on the 1,420-calorie burger, which contains 107 grams of fat, will cost around $7 with fries and a soda.

"The (original) 'Monster Burger' was one of our most popular menu items," Brad Haley, executive vice president of marketing for Hardee's, said in a statement. "(But) it's now a 'Thickburger.'"

Many fast-food chains, including McDonald's (Research) and Wendy's International (Research), have tried to offer healthier menu items to cater to Americans on low-fat, low-carb diets.

But Hardee's said the "Monster Thickburger" is not all it has to offer on its menu.

"In about 30 days, we will be introducing a BBQ chicken sandwich that would only have 4 grams of fat and 300 calories. We just have a wide range of selections for everybody," Haley said.

Hardee's is owned by CKE Restaurants (Research) of Carpinteria, Calif., whose stock rose about 1 percent Monday.