One of our anonymous readers sent this one in. IFOCE member Andrew Lane attempted Beau Jo's Challenge, a 14 pound pizza, with a friend.

Beau Jo's takes it. We cannot put away the 14 pound behemoth that is the Beau Jo's Challenge. It was quite delicious and a very refreshing late lunch. 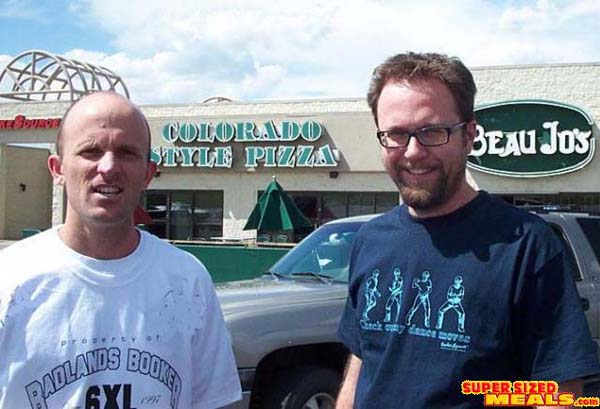 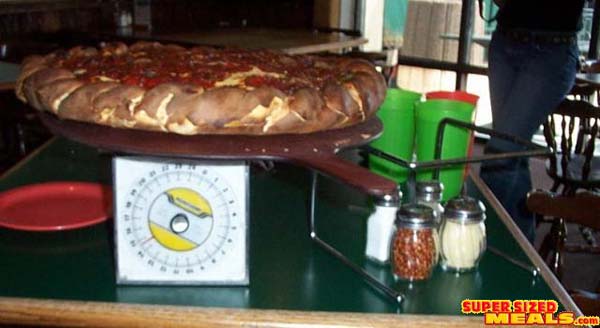 Ah, here it is! A lovely pie, 18 inches in diameter and 4 inches high. 1 pound of sausage, 1 pound of hamburger, 1 pound of green pepper, 1 pound of red onion, 4 pounds of real mozzarella cheese, and 6 pounds of super-thick mountain crust. 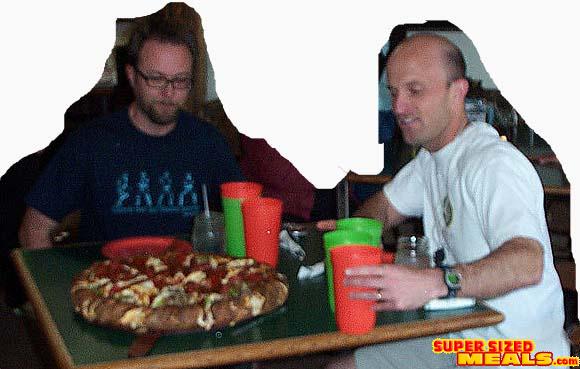 We are set to begin! 1 hour limit. This is about the 30 minute point. Pick it up! 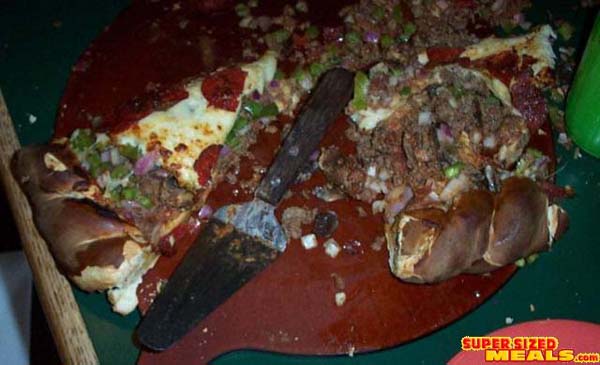 And here's the slices left at the end after we throw in the towel!
We started off very well. The green pepper and onion were a stunning complement to the hamburger, sausage, and pepperoni. Right away we noticed the mozzarella cheese layer - it was quite tasty (it was not shredded cheese from a bag but had to be actual mozarella slices - very good) but it was thick. Thicker than on our test pizza a few weeks back. And we would expect the real deal to be set up differently than the practice version, but this cheese layer would prove to be a very effective plug in the system. At about the 45 minute mark we started appraising the situation, eyes darting back and forth between what was left on our plates, the slices left on the paddle, and the other detritus strewn about the table. We kept going, never getting to the last two pieces on the paddle. At a pound each, and with seemingly ginormous layers of cheese on each, we quietly bowed out at the 55 minute mark. We both could have eaten more of something, just not this pizza.

(and from the comments section)

At 5/07/2006 12:17 PM, mes said...
It started out as a really tasty pizza, spicy sausage and hamburger perfectly blended, complimented by mushrooms, crunchy onions, and bell peppers, and topped off with salty pepperoni. For at least the first 20 minutes this was a really great meal.

We were able to plow through 3 slices each and I wasn't feeling full, wasn't feeling a wall, nothing. The plan was to polish off the topings and do the bread later. Optimism began to fade at about the 30 minute mark as the bread slices piled up and what used to be tasty, salty goodness began to turn.

The cheese. It was good, fresh, mozzarella, thick, with those pepperoni stuck to the top and other topics on the bottom. I think it was more the pepperoni, than anything else that started the Change. I started out wolfing down the chunks of elastic white material all at once, then I had to trade off the flavor by switching between toppings and cheese, then adding water to help get it down.

At about the 40 minute mark the salty pepperoni was getting to me. How would I finish this slice in front of me, let alone the other one on the paddle? Then the flavor turned disgusting in a wave, the tasty pizza turning horrible, the cheese like rubber dipped in grease and rolled around in a mountain of salt. I was eating salt-rubber-grease. I focused on the toppings... salt... bold spice turned awful... time ticking by.

The worst was a 5 minute period in which the flavor of the chewed up remnants of toping in my mouth threatened a reversal. Willpower and focus kept it down. I switched to the bread, the horrible bread, with nothing but bread and hint of topping flavor. Water helped get it down so long as what was in my mouth didn't get too soggy and threaten disaster.

But by now the time left wasn't enough to finish what was in front of us... I knew it, didn't want to admit it... every nibble a mountain to climb, every swallow a study in concentration and control. It just couldn't happen. 5 more minute, 50, 500. It wasn't going down.

I slept away most of the night... this morning and tomorrow we'll see just how much the cheese is a "plug in the system"...

At 5/09/2006 1:13 PM, liz said...
plus that crust! That's some serious crust. This might be a really dumb question, but do you think you would have done better if you'd have eaten it really fast? Like to trick your brain into not knowing how full the stomach really was? It sounds like this was just a matter of having met your capacity, in which case, speed wouldn't have helped.