Nothing says "birthday" like a nice big cake. This must be a big birthday then! When you've got 100lb's of Flour, well, you're going to get a big cake! Even Defence Secretary Donald Rumsfeld got in on the Supersized action!

A team from the Pentagon’s Senior Leadership Dining Facility is currently mixing this massive ingredient list to create the Army's birthday cake, to be served 11 a.m. June 14 at the Pentagon Courtyard.

“It’s a once in a lifetime thing. Cakes get made all over the world at different levels, but this is at the highest level. Anytime you do something like this, it’s a point of pride,” said Sgt. 1st Class Michael Cate of the Pentagon cake-making team.

Decorating the Army's 231st birthday cake
Seventeen Army chefs will have a hand - or whisk - in the creation. The final product will be an 8.5 feet long, 3 feet wide, 250-pound-plus confection. 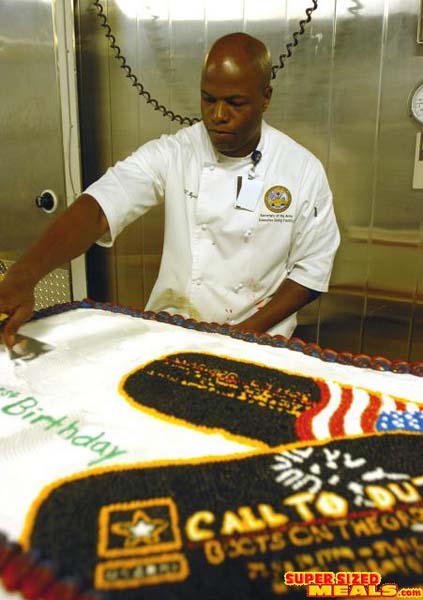 From the first egg-cracked to the careful assembly of about seventy sheet cakes, it takes the team one week to prepare the dessert. 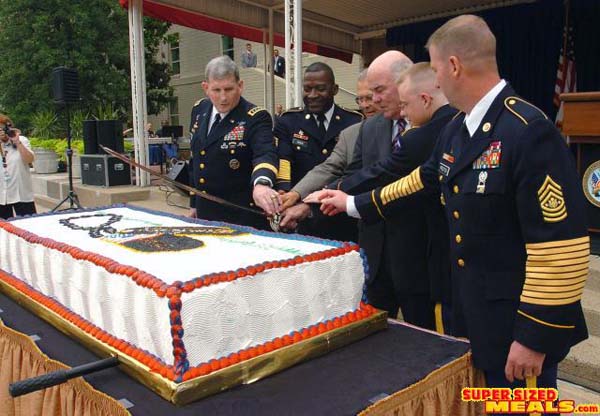 One of the Chef's congratulated for their efforts