Farewell to Esther Snyder, co-founder of In 'n' Out 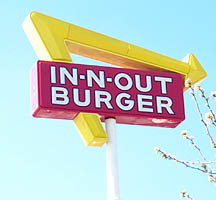 You may or may not have heard, but on August 4, 2006, co-founder of the In 'n' Out burger chain Esther Snyder passed away. She helped found In-n-Out Burger back in 1948, being one of the first to introduce the "Drive Thru" way of ordering... From the In 'n' Out Web Site:

In 1948, the first In-N-Out Burger was founded by Harry and Esther Snyder in Baldwin Park. Harry's idea of a drive-thru hamburger stand where customers could order through a two-way speaker box was quite unique. In that era, it was common to see carhops serving those who wanted to order food from their car. Harry's idea caught on and California's first drive-thru hamburger stand was born.

So thanks Esther for helping create an icon thats stood the test of time. Without it, we woudln't have felt the joy of the 100x100! (a Mc 100x100 just wouldn't be right!)