26 nuggets not enough? How about 50? Still not enough? How about 80 in less than 30 minutes? Inspired by our earlier stories on the Chicken Nugget Challenges, Dave "Megamunch" Schoffner decided it was time to obliterate the current record and down 80 nuggets in one sitting. Not only that, he did it in less than 30 minutes! Considering this effort was 370% of the recommended daily intake of sodium, it's no surprise he woke up at 4:30am with an unquenchable thirst!

A few days ago, SuperSizedMeals.com posted something about a man who failed to reach his goal of eating 27.5 Wendy's nuggets in one sitting (he would eat 26 before calling it quits). It was all the inspiration I needed. At 5:35 pm this evening, I walked into the McDonalds on Front Street in Harrisburg, Pennsylvania and ordered 80 chicken McNuggets. My heart and stomach swelled with pride when the cashier screamed to the crew in the back, "Y'all better drop some more nuggets! Like a lot!"

Damn right. What follows is a pictoral account of my attempt to eat all four 20-piece orders in under one hour. For the record, yes, I know I used McDonald's nuggets instead of Wendy's nuggets. It was simply a matter of personal preference. In the Flickr photo set linked at the bottom of this post, you'll find a picture of two Wendy's nuggets side-by-side with their Mickey D's brethren and you'll notice both artery cloggers are eerily similar in size and shape. 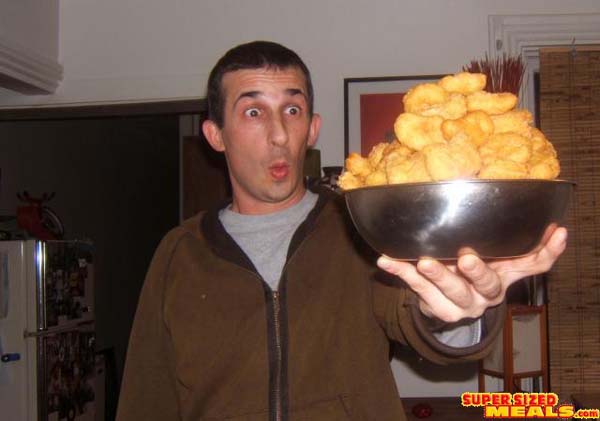 This is a shot of me showing off my bowl 'o nuggets. This was also the bowl I used to weigh the little bastards (just shy of 2.75 pounds).

My Boston Terrier, Pete, keeps an eye on my nuggets. Normally he'd get yelled at for getting that close to my food with that look in his eye, but not this time. Dipping sauces are visible in the foreground. From left to right: barbeque, sweet and sour, honey mustard and buffalo sauce (just like the stuff they use on buffalo wings). During the latter, nauseous stages of the contest, I used considerably less spicy buffalo sauce. 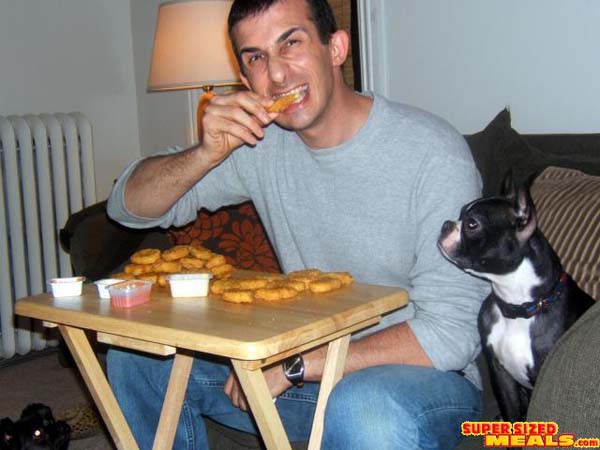 Tearing into nugget #50 around the 12 minute mark. I wasn't speed eating (like I would during a timed contest against other eaters), but I was eating a slightly faster pace than I would normally. Early in the contest, I was popping one and sometimes two nuggets at a time. By nugget 50 I'd slowed to one. 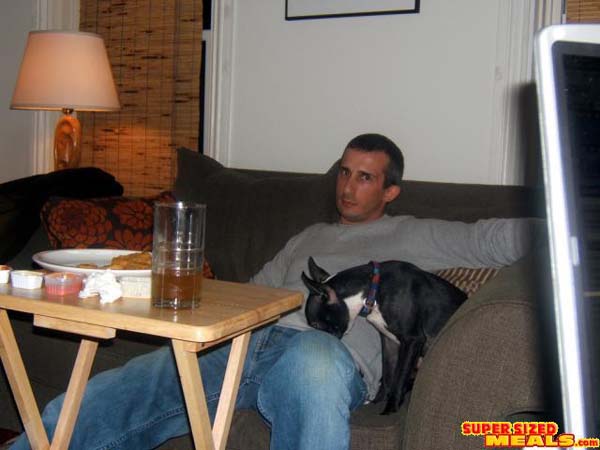 Around nugget #60 I hit "the wall." I was startled at how quickly it overtook me. One second the nuggets were going down fine and two nuggets later I was starting to sweat (literally!). Here I am taking a breather 25 minutes into the attempt with 10 nuggets remaining. By this time I was no longer popping them into my mouth whole, I was taking half-nugget (or smaller) bites.

Done! I pushed myself to get the last three down during the final minute and finished with an official time of 29 minutes and 57 seconds. Before I started, I thought I'd only be able to do between 50 and 60. But, in the minutes after I'd completed the admittedly disgusting feat, I was confident that I could have downed another 20 over the next half hour to lay claim to 100 in one hour. Oh well, another day.

A complete set of pictures can be seen below.

UPDATE: 24-hours later, the effects of the nuggets on my body are debatable. I woke up at 4:30 this morning with an incredible thirst (a byproduct of taking in 370 percent of my daily intake of sodium) which couldn't be quenched. I tossed and turned for about an hour before rolling out of bed. Besides feeling generally slow and groggy today, I'm also coming down with a cold. I get only one or two mild colds each year, so this is either a coincidence or somehow the nuggets have eroded my immune system and have left me vulnerable to all sorts of diseases. Syphillis, dandruff, dyslexia...I can only imagine what's next. 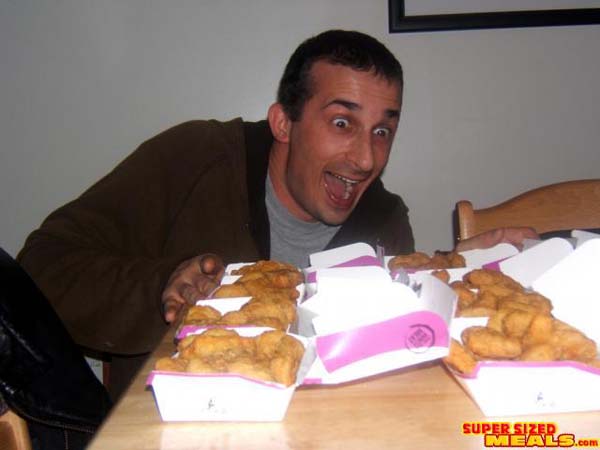 Me getting a little loopy at the sight of my soon-to-be-dinner. Pictured here are eight boxes of 10-pieces nuggets and one jackass. 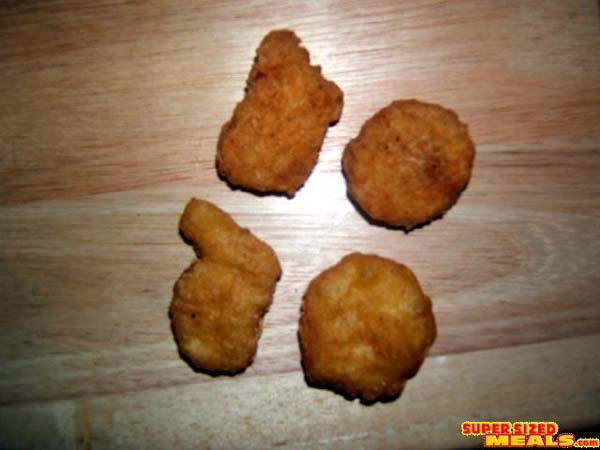 Since Wendy's was right next door (and the challenge that inspired my own attempt involved Wendy's nuggets) I bought a five piece of Wendy's nuggest to compare the two varieties. Top is Wendy's, bottom is McDonald's. Notice how they're oddly the same size (like a fat Florida and a frisbee). 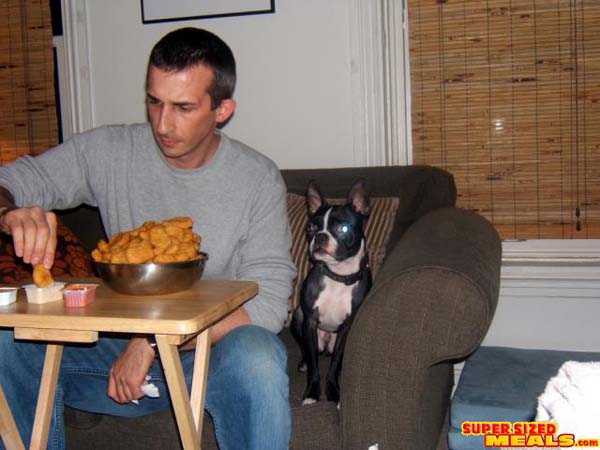 This is actually nuggets number three or four, but it's near the beginning. That's my dog, Pete. He didn't leave my side throughout the entire attempt.