Famous Fat Dave recently introduced one of his friends Gary Washinsky to the Yummy Village Sushi Challenge. The Challenge: to eat more sushi than the last record holder in 20 minutes or less. Beat the previous record, get your sushi for free. Lose, and you have to pay for the sushi you've eaten. After a bit of training and support from his friends, Gary was ready... ready for what could be the toughest challenge on the Worldwide Sushi Circuit... But the question remains, does he have what it takes to conquer the Yummy Village Sushi Challenge? Part 1 of this 2 part saga starts now:

“A way back east there was a fella. Fella I want to tell you about. Fella by the name of Gary Washinsky. At least, that’s the handle his lovin’ parents gave him, but he never had much use for it himself. This Washinsky, he called himself “Nigiri.” Now, Nigiri, that’s a name no one would self-apply where I come from. But then, there was a lot about Nigiri that didn’t make a whole lot of sense to me. And a lot about where he lived likewise. But then again, maybe that’s why I found the place s’durned innarestin’.” 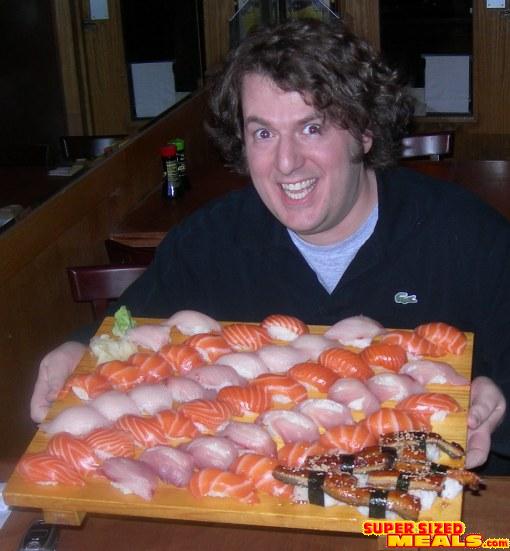 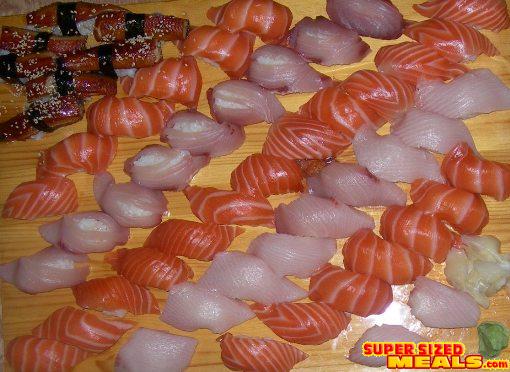 “They call New York the Big Apple. I didn’t find it to be that exactly, but I’ll allow as there are some big meals there. ‘Course, I can’t say I seen London, and I never been to France, and I ain’t never seen no queen in her damn undies as the fella says. But I’ll tell you what- after seeing New York and thisahere story I’m about to unfold–well, I guess I seen somethin’ ever’ bit as stupefyin’ as ya’d see in any a those other places, and in English too. So I can die with a smile on my face without feelin’ like the good Lord gypped me.” 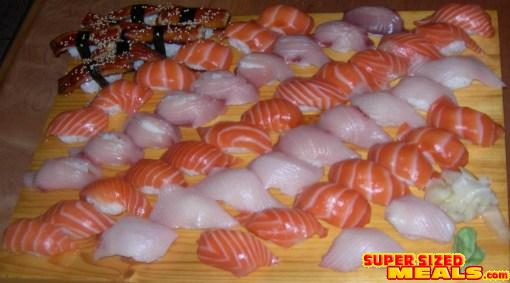 “Now this story I’m about to unfold took place back in early February– just about the time of our conflict with Muqtada Al Sadr and the Eye-rackies. I only mention it ’cause sometimes there’s a man- I won’t say a hero, ’cause what’s a hero?- but sometime’s there’s a man.” 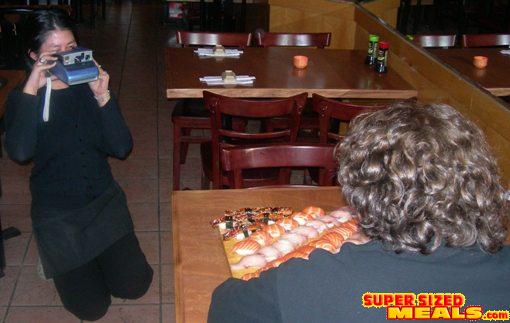 “And I’m talkin’ about Nigiri here. Sometimes there’s a man who, well, he’s the man for his time n’ place. He fits right in there- and that’s Nigiri, in New York City.” 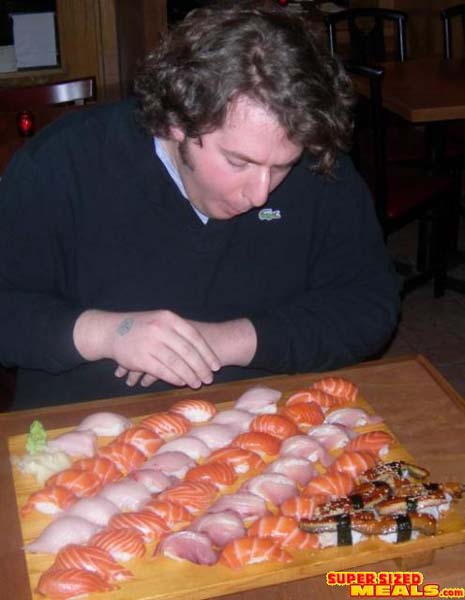 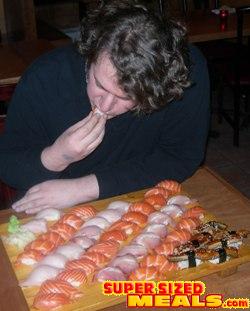 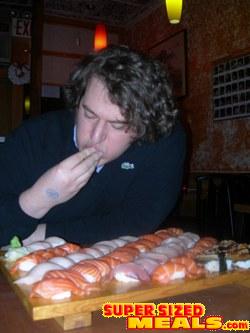 “Well, I lost m’train of thought here. But - aw hell, I done innerduced him enough.” 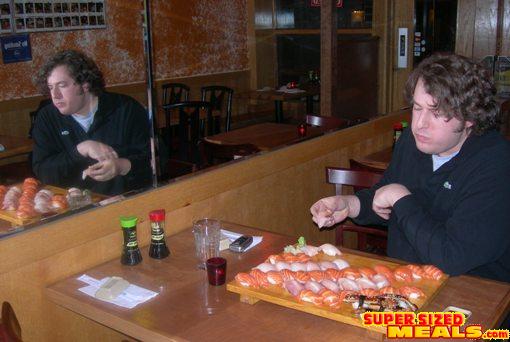 Yes, this Big Washinsky is the very same man I profiled a few months back during my all-you-can-eat sushi in Bensonhurst, Brooklyn expose. So it is not surprising, with all of those untold hours of training under his belt, that he felt it possible to take down a sushi-eating record here in Manhattan. It’s called the Yummy Village Sushi Challenge. Eat one more piece than anyone ever has within 20 minutes, and the meal, now valued at somewhere around $150 depending on what’s ordered, is free.

Last week, during Nigiri’s birthday celebration, well after 3 in the morning, the Big Washinsky decided to go for the gold. The previous record: FIFTY TWO PIECES. But for a guy whose nickname (rarely employed, I admit) IS Nigiri, for a guy who comes from a neighborhood in which all-you-can-eat sushi has gone from craze to way of life, for a guy who never says never, FIFTY THREE nigiri in 20 minutes seemed, somehow, within reach.

And so, with his friends Jack, Melissa, and me to support him along with the waitress and George the sushi chef, he went for it. The support team was ideal. Jack, who recorded the Famous Fat Dave theme song while stuffing himself with sushi from this very Yummy Village, knows what makes The Big Washinsky tick, and thus knows how to talk to the man even during the most trying of times. Melissa, who lives and dies for sushi and has eaten at Yummy Village late at night many times and so knew what best to order (7 eel, 20 yellow tail, and 26 of some of the tastiest salmon in town), has a calming effect on Nigiri like music on a savage beast. And I have a digital camera and a blog.

When the clocks started, Nigiri started off so furiously, within the first few minutes he put himself IN the game through sheer will power. Fifty three pieces in 20 minutes would not be easy. And most of the winners on the Wall Of Fame noted on their polaroids that they’d broken the record in far less than the alotted time. If The Big Washinsky didn’t start off strong, there’d be no hope. And he was doing EXACTLY what he needed to do:

The pace at which Nigiri began consuming nigiri was staggering. The concentration on his face was intense. The determination in his eyes was inspiring:

While Jack did most of the coaching, Melissa ate her own meal alongside Nigiri’s so as to make him feel like less of a spectacle: 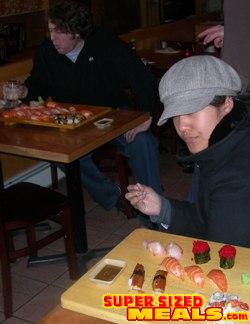 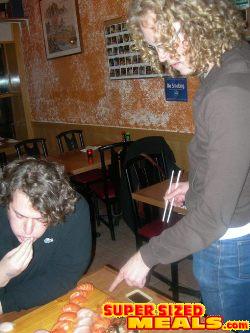 But his concentration was so strong, I have the feeling that it wouldn’t have broken had he been under a spotlight in front of a stadium full of angry, drunken Sed Sux fans. He was a man on a mission.

Even George the sushi chef, who stood to lose quite a bit of money late on a random Tuesday night, was altruistically encouraging. Probably assuming that Nigiri would be no match for his Sushi Challenge, George was all smiles as he posed for a picture while the challenger pressed on behind him: 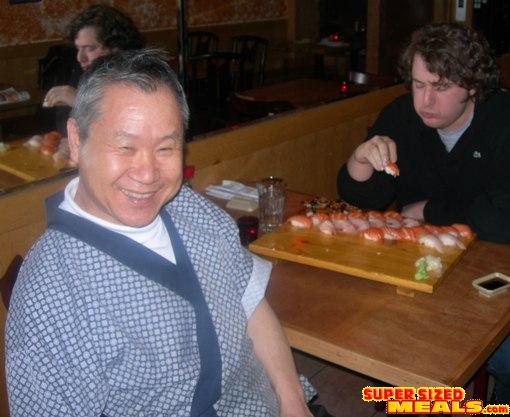 And when it came time (later) for Nigiri’s stomach to revolt against the unwelcome intrusion of raw fish and expanding white rice after much beer and whiskey during a part of the night when he is normally fast asleep, George told The Big Washinsky he could stand up from the table (something George’s own printed rules forbade). George even encouraged him to do like Takeru “The Tsunami” Kobayashi, the six time Coney Island Hot Dog Eating Champion who has never been beaten in competition with a human (a Kodiak bear once defeated him), and shimmy his belly loose:

No folks, I’m not going to sugar coat this. The event was not a pretty sight. There was a moment somewhere around piece 29 when Nigiri nearly lost it. His cheeked puffed out. His eyes shut tight. His belly let out a great roar and a whine as if an ocean liner was capsizing on the high seas. He put his fist to his pursed lips. We all held our breath in fear and wonder. And then . . . with his fist still pressed to his lips . . . he gave a slow, authoritative wag of his index finger as if to say, “Fish, I love you and respect you very much. But I will kill you dead before this day ends.” We were witnessing the event turn from something out of The Big Lebowski to something out of The Old Man And The Sea. It was now man versus nature.

Nigiri shot an angry glare at the sushi before him. With a flash of his eyes, I understood him to communicate with his adversary, “Fish, you are going to have to die anyway. Do you have to kill me too?” And with a determined grunt, Nigiri picked up another piece of sushi and downed it in seconds.

Had he been looking at a copy of The Old Man And The Sea (like I am clearly doing now), I’m sure he would have said, “I think the great DiMaggio would be proud of me today.” Of course the great DiMaggio couldn’t be there that night, but Jack, his eating coach, was most certainly proud: 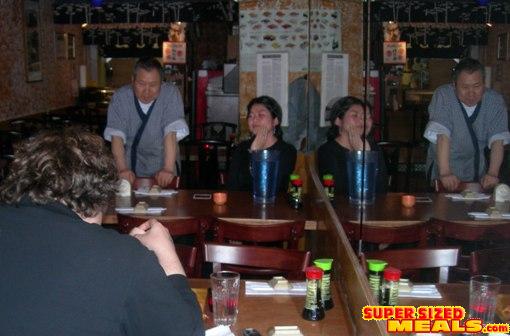 But then, suddenly and for no apparent reason aside from the obvious one, Nigiri couldn’t eat another bite. It was like watching a thoroughbred pull up lame. He’d reach for a piece, and then stop just short of picking it off his plate. Then he’d shake his head as if he didn’t understand what was wrong. I was reminded of the moment Bo Jackson crumbled to the turf upon trying to stand after sustaining the hip injury that ended his career.

He’d been my friend for many years already. But the performance I witnessed in just those first 10 or 11 minutes made him my hero. I know I asked, “what’s a hero?” at the start of this piece. But this Big Washinsky had become my personal hero regardless of whether he would go to finish his 53 pieces or not.

Like the kid who asked Shoeless Joe to “Say it ain’t so,” I asked Nigiri if could eat any more. He shook his head no. I shook my head no in response. I hung my head. My heart sank. I asked if he would mug for a photo while his body refused to cooperate with his heart. The pained image that my camera captured says it all: 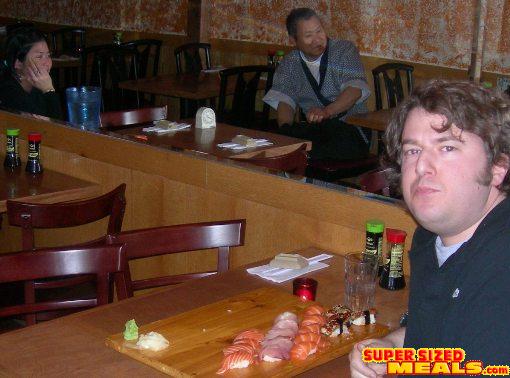 But there was still time on the clock. . .