A Supersized tragedy... Australia's largest lollipop has been destroyed in a fire in the northern Victorian town of Echuca. Even though the store sustained damages of around $500,000, I'm surprised just how well the lollipop looked at the end of the blaze! I suppose it makes sense, it's melted sugar...

Australia lost its largest lollipop in a store fire in the northern Victorian town of Echuca. The fire started in the heritage-listed Echuca Heritage Sweet Company at 4am. It damaged two adjacent shops and led to the evacuation of 14 guests from a local bed and breakfast in the heritage-listed area of the town. 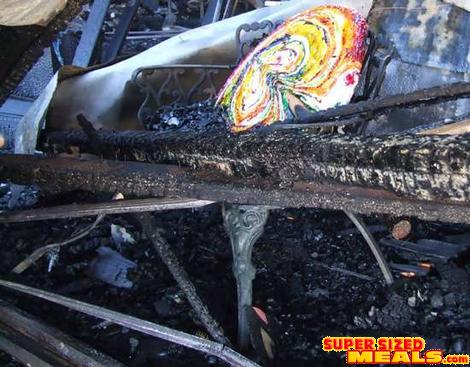 Fire authorities are still investigating the cause of the blaze, but estimate a damage bill of up to $500,000 to the 90-year-old shop.

Country Fire Authority spokeswoman Robyn Hobbs said the shop was popular with tourists and locals, but "especially with the kids".

The most well-known object in the shop, Australia's largest lollipop, had been damaged beyond the point of being salvaged, Ms Hobbs said.

"There's a lollipop in the front window that's been half burnt — that's Australia's largest lollipop.

"Anybody who's been to the Echuca Port Area will know. When you say the largest lollipop, they'll know exactly where it was."

Business owner Ken Wells told the ABC he was shattered by the loss, which destroyed about $40,000 worth of stock.

"Most of the interior of the building has pretty much gone, it's all destroyed and the walls structurally [are] unsound now I've been told and the building will have to be demolished," he said.

"So they'll be demolishing that in the not too distant future I'd imagine because the place is extremely unsound, it's unsafe."

"It means we'll have to start again and rebuild our business, but I guess more importantly for our staff it means they haven't got a job and for some months until we get the building back up and our business started."