What would you do with a 325Kg (716.5lb) Blue Fin Tuna? For the person that caught it, Steve McCowan, he believes "It'll probably be going on a wall somewhere". Apparently large Blue Fin Tuna fetch a hefty price in Japan, I wonder how much the World Record would go for?

A 325kg Pacific blue fin tuna, believed to be a world record, was caught off New Zealand's South Island West Coast on Sunday. At 6am angler Steve McCowan knew he had a big one on the line. "I certainly knew it was a big one two-and-a-half hours later," he said. 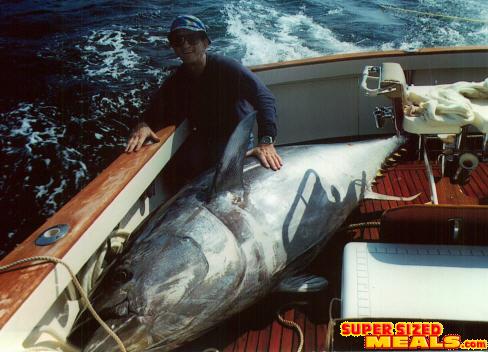 Not actual Tuna, but gives you an idea of the size, it's bigger than this one!
Having sailed out of Westport, the fishing boat Jewel was off the coast not far from Karamea when the big fish bit.

Standing on the back deck, McCowan fought with, and reeled in, the 325kg Pacific blue fin tuna.

McCowan said he'd been fishing for about 20 years and this fish was the big catch.

Jewel skipper Ian Bain said finding the right spot had been the hardest task that morning.

"We followed the Korean boats for a while and just nothing. It was behind the Russian boats we found the tuna".

The tuna are attracted to the hoki fishing boats to eat the cut-offs cast overboard.

McCowan said the crew had caught two other Pacific blue fins that morning, but had released them.

A 325kg tuna can fetch very high prices in Japan, but that is not the fate for this fish.

"It'll probably be going on a wall somewhere."

McCowan said that when going for a world record attempt the fish were not bled and not gutted so as to retain their full weight.

On Monday morning, Mr McCowan was making sure all the paper work was filled out correctly for his catch to be officially recorded and entered as the world record.