They might be the water trucks of the desert, but apparently they carry a fair bit of meat too! French Chef Christian Falco, who is notorious for cooking up Supersized Meals, cooked the beast for 15 hours at a seaside Moroccan town south of Rabat. Feeding 500 diners has never been so interesting! (Thanks for the link David!)

SAFI, Morocco - A French cook has prepared the world's largest mechoui grill -- spit-roasting a 550-kg camel for 15 hours at a seaside Moroccan town south of Rabat. "It's a tradition that's fallen out of favour," said 63-year-old Christian Falco from the south-western French city of Perpignan, describing a time two centuries ago when a Moroccan king offered a roast camel to his people. 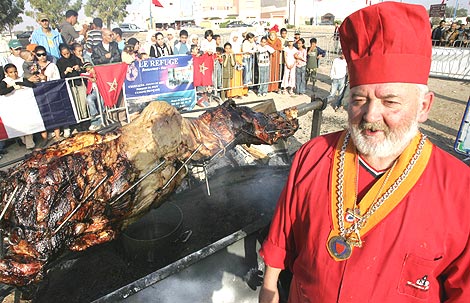 A French chef from the Perpignan region in Southern France poses in front of the world's largest mechoui grill. Falco, using over three tonnes of wood and 15 litres of oil, roasted a 550kg camel for 15 hours in the presence of a notary who recorded the feat.
Photo: AFP: ABDELHAK SENNA

"I brought it back," said Falco, a six-time Guinness world record holder whose other culinary claims to fame include spit-roasting the world's largest slab of beef, 985.5 kg, in 1996.

About 500 intrepid diners feasted on it last night at the seaside town of Safi, paying 150 dirhams ($A20) for the experience.

Safi was also the settng for the world's largest tajine, a North African stew, made of sardines in 1999.

Falco is already planning his next challenge -- to beat the world record for the biggest spit-roasted bison in Costa Rica.