Australia day 2008, 7pm. The time had come to face the Inaugural 1kg Caxton Hotel Steak Challenge. The Challenge: Finish a 1kg Rump, salad and potato in one sitting. The Prize: a "goodies" bag (they wouldn't tell us what was in it). After plenty of pints and a few Vodka's at the bar, it was time to head down to the restaurant. Would I be able to tackle one of the newest, largest steak challenges in Brisbane?

It was a great Australia Day. Plenty of people partying on, great weather, plenty of cheap beer. It was the perfect day for the Inaugural Caxton Hotel's "The Caxton Kilo". A 1kg Rump steak served with your choice of chips or baked potato and a side salad. Finish the lot and you get a "goodies bag". We'd asked a few times what was in it, but they were very hush hush about it all. No matter, it could have been a bag full of paper for all I cared. The important thing here was to finish the challenge and emerge victorious! 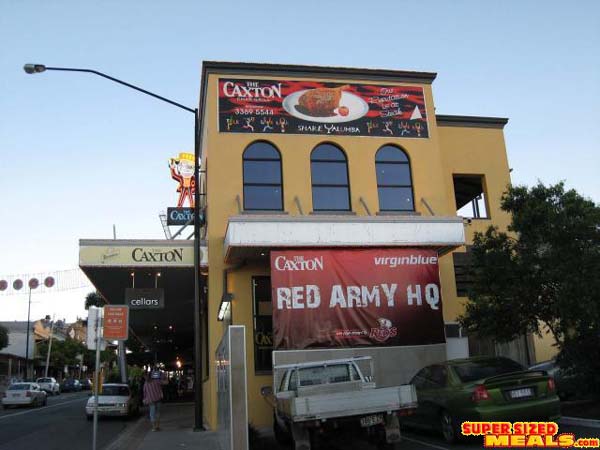 The Caxton, home of the Australia Day 1kg Steak Challenge 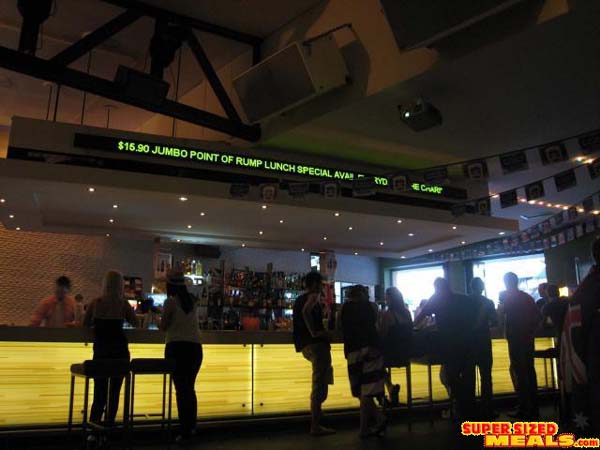 Inside the Caxton Hotel bar 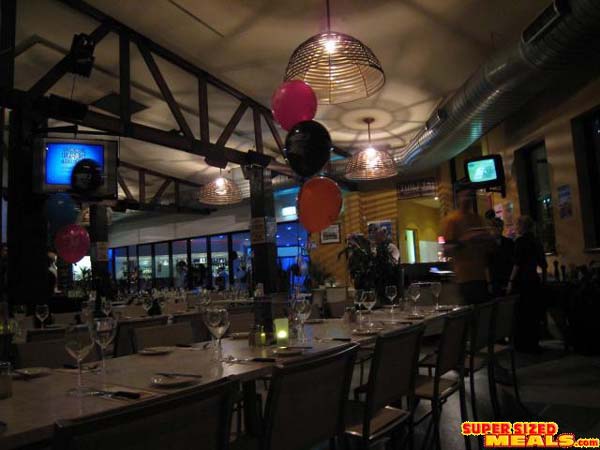 The view from the dining room 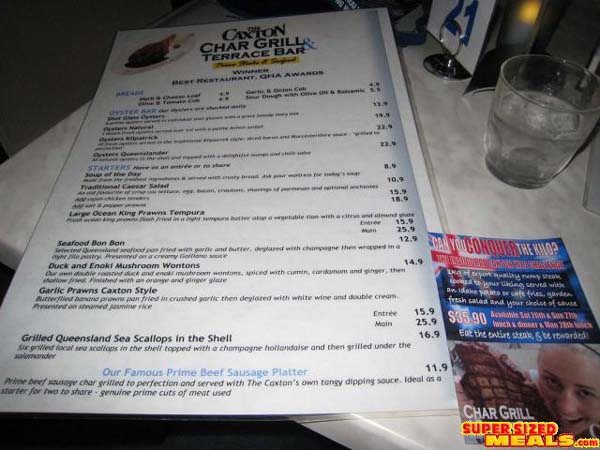 The Menu with the Challenge 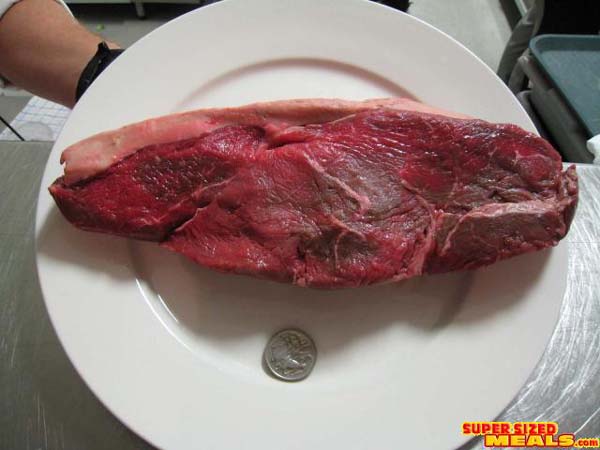 I was a little surprised here. I thought it would have been a bit bigger than what had shown up on the plate. After a bit of research, I found that 1kg is only 35oz, meaning it's only half the size of "The Big Texan". I think the Webcke Rump might be bigger as well. No matter, being the Caxton I knew the steak was going to be really good quality, so I was looking forward to sinking my teeth into this one! 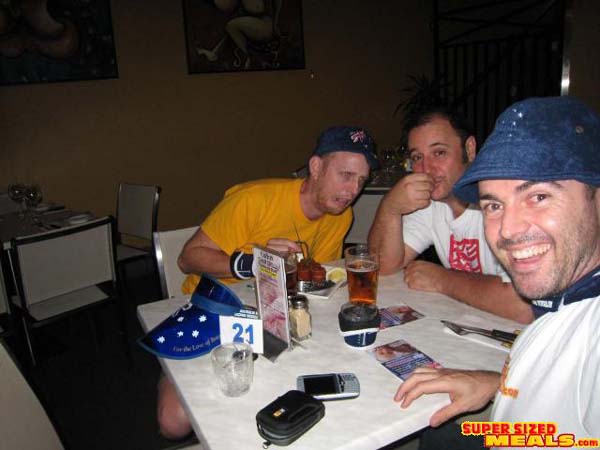 Andrew, Karim and I prepare for battle! 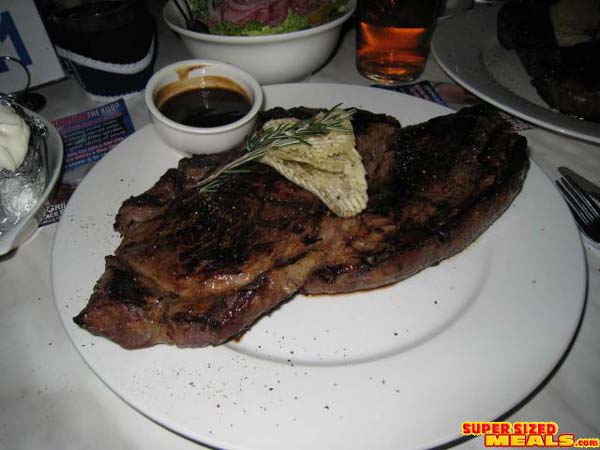 Cooked Medium Well, this steak looked fantastic, I couldn't wait to get started! 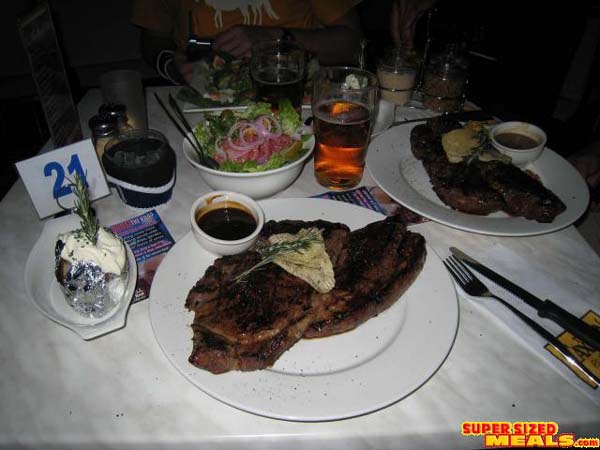 Karim and I ready ourselves for the challenge ahead. Andrew Piked :D 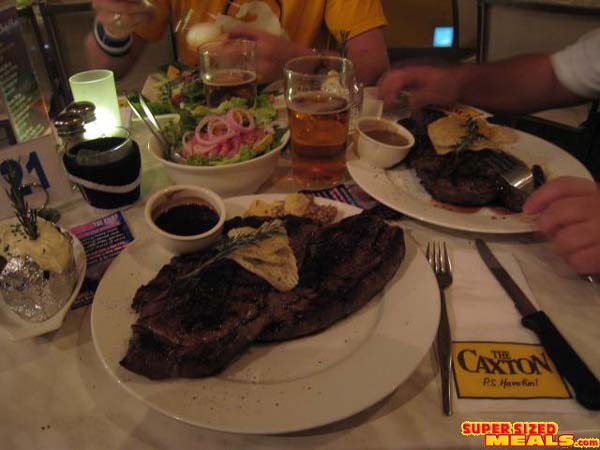 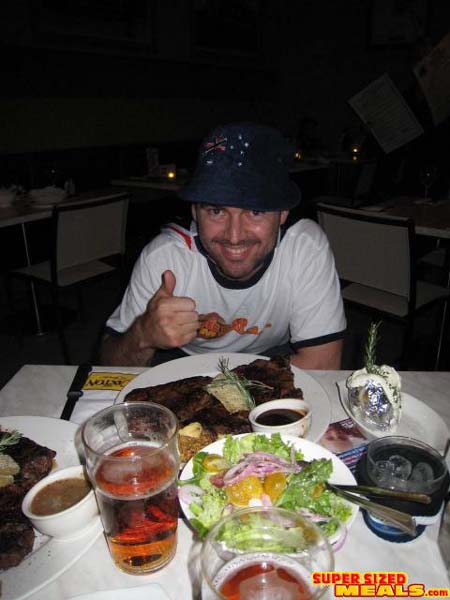 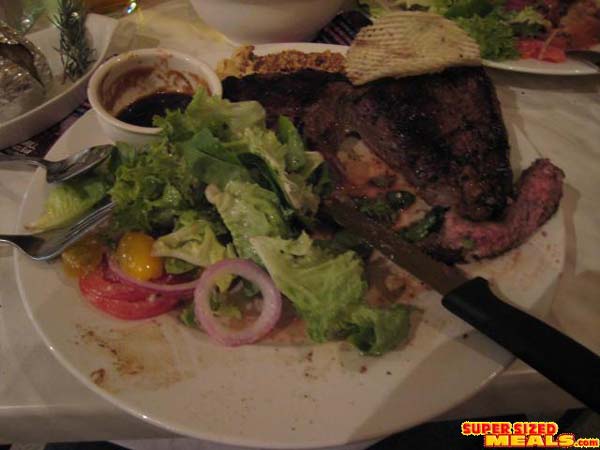 Half way through the challenge in 10 mins

At this point I actually thought I'd better slow down. This was really tasty steak, and I wanted to enjoy it rather than scoff it down at record speed ;) 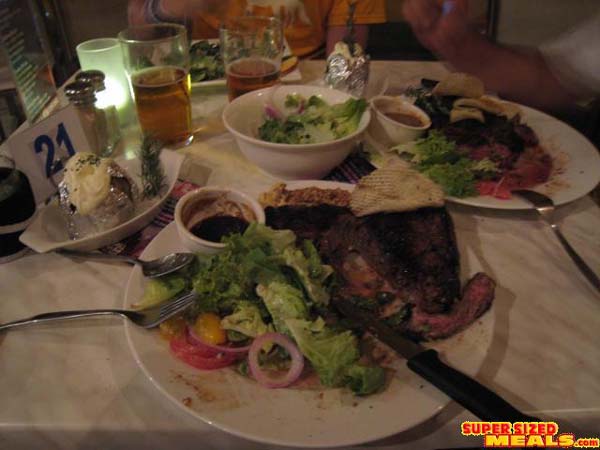 Salad is served with the challenge, so it must be eaten! 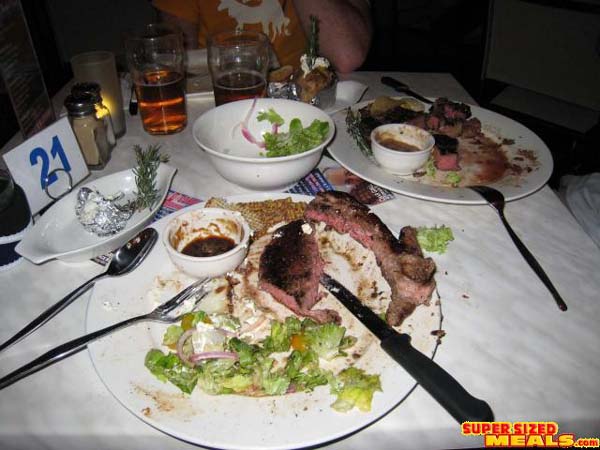 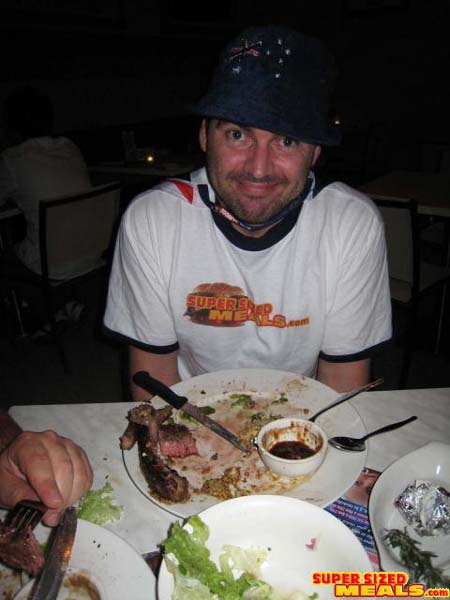 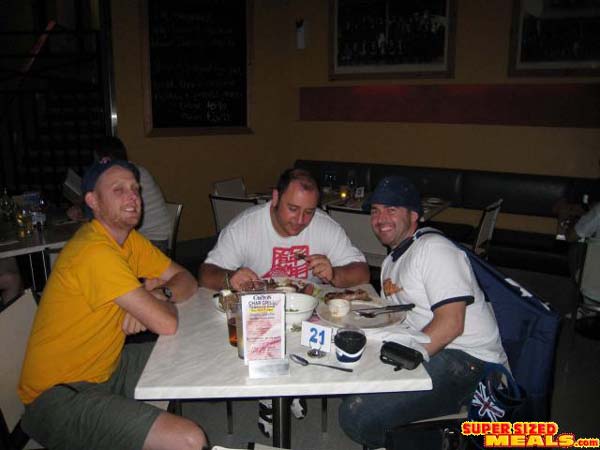 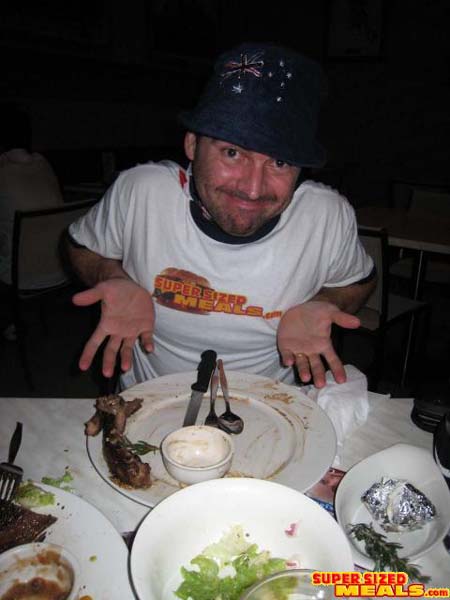 Finished! 30 minutes (although I wasn't rushing) 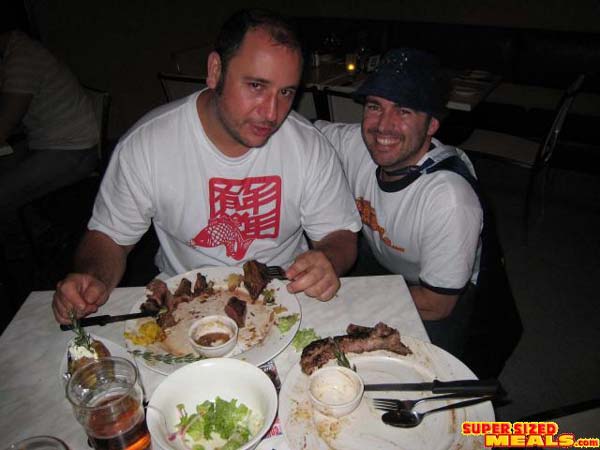 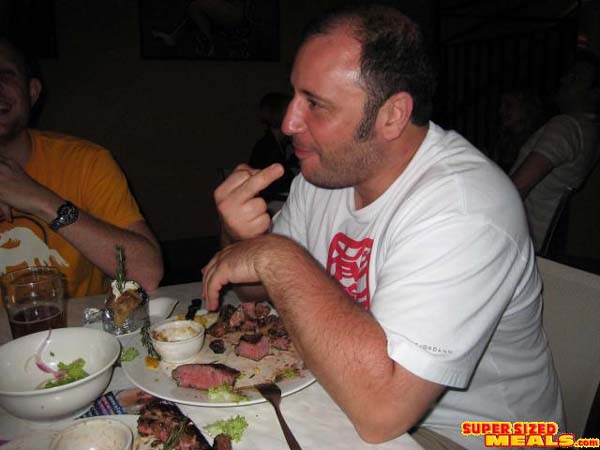 Not happy with the heckling that follows... hahahah... 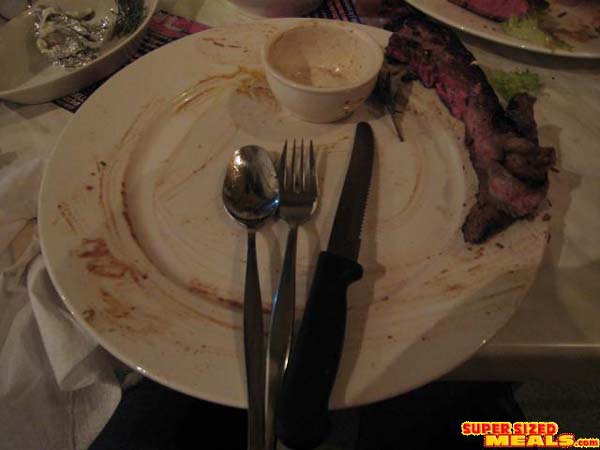 Not much left! I pretty much licked the plate clean, damn it was good

Right about now the waitresses came over, so I put this to them. Double or nothing. Tell the chef I bet him the cost of the two meals that I could do another steak. I begged them but alas no good. They weren't keen on the idea... I'm wondering if the shirt scared them off a bit ;) So anyway, poor Karim was struggling a bit, so I thought I'd help him out by eating his potato :) 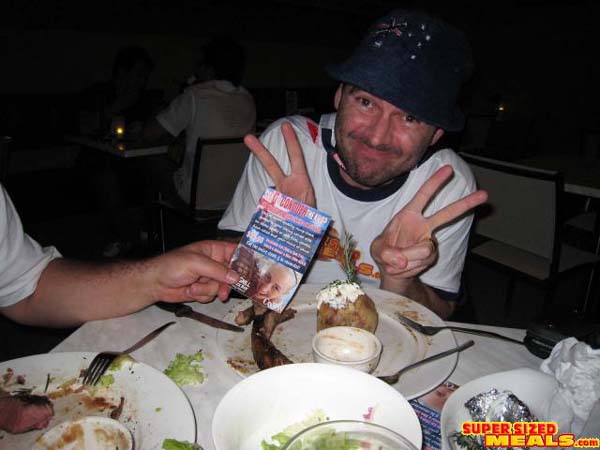 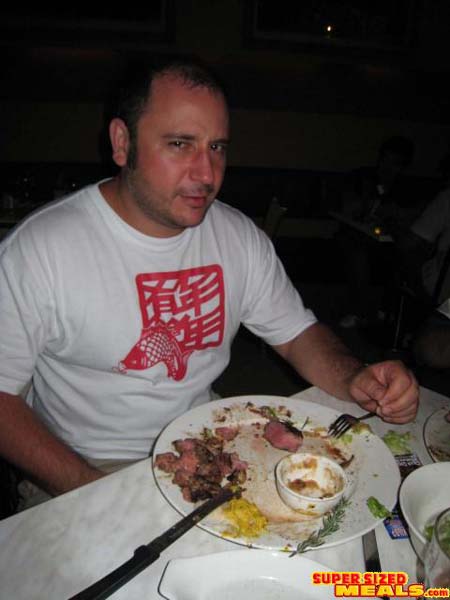 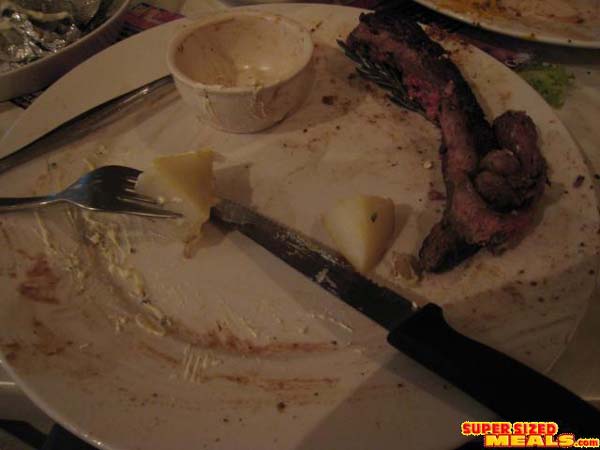 It was about here that the elation of finishing the challenge, and the copious amount of beer I'd drunk had given me a bit of liquid confidence. I bet the guys that I could eat a massive wad of English mustard in 2 bites. Damn I'm stupid sometimes... 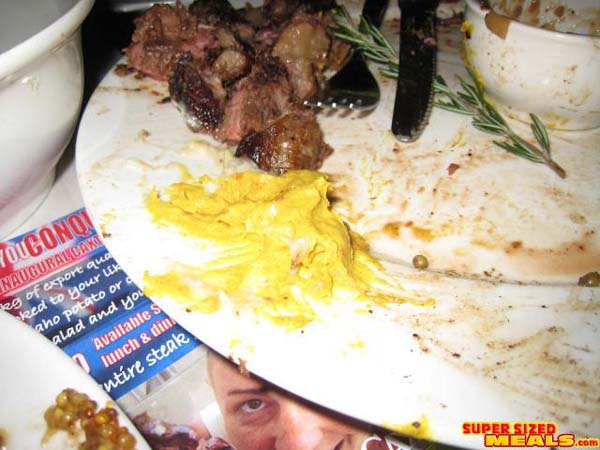 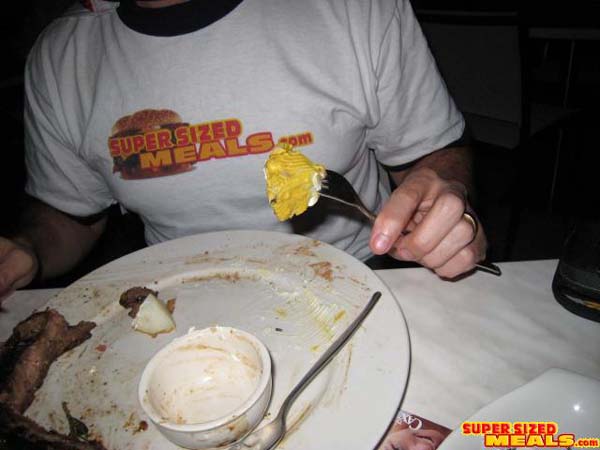 The challenge was accepted 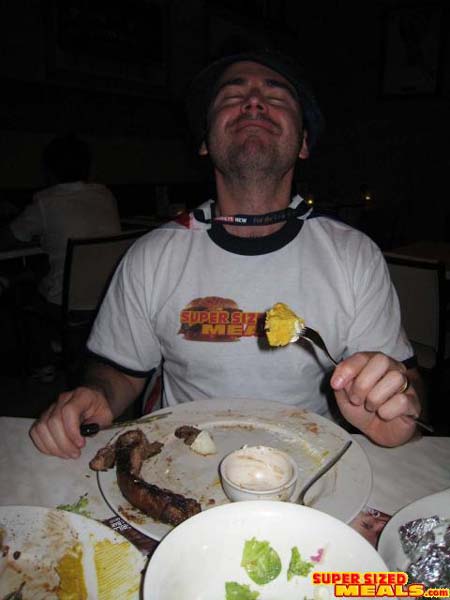 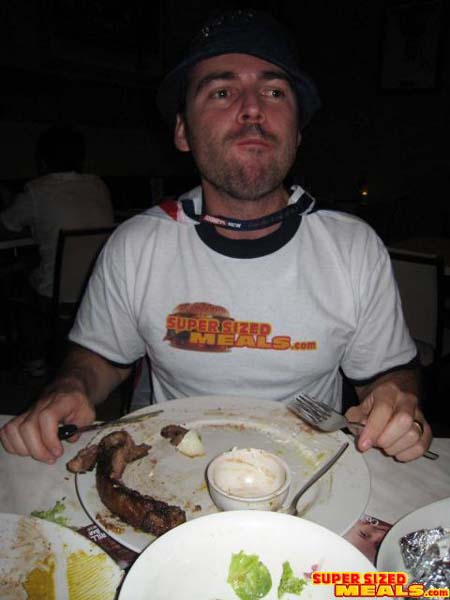 Bite has been taken

and the pain sets in 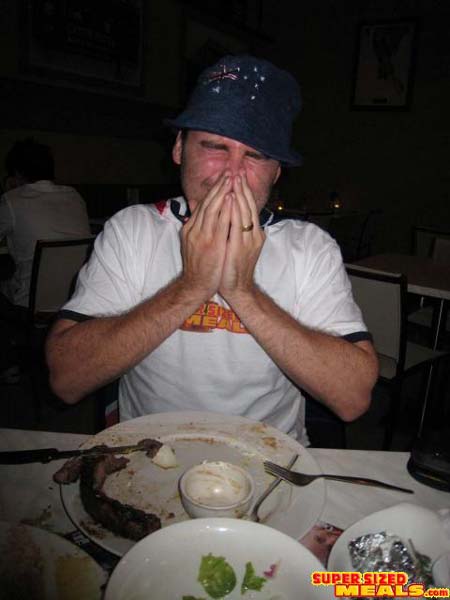 Burning up the back of your nose is not fun 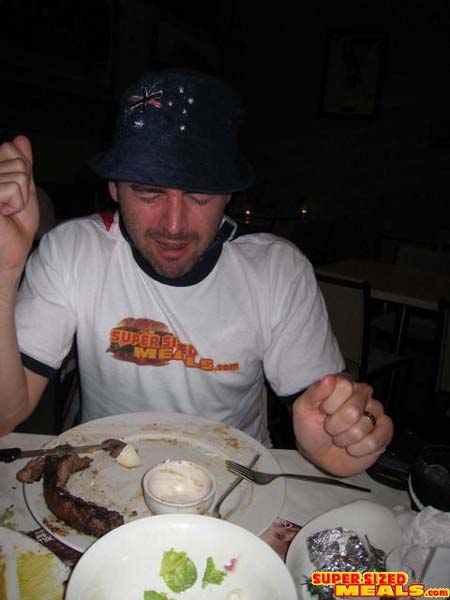 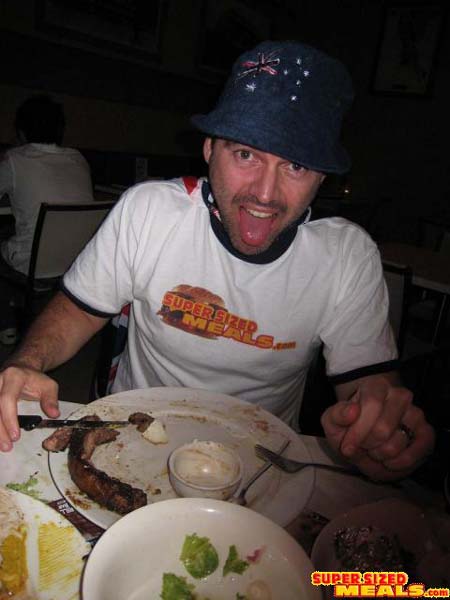 And with that came 2 free drinks, woo hoo! (not like I needed them) 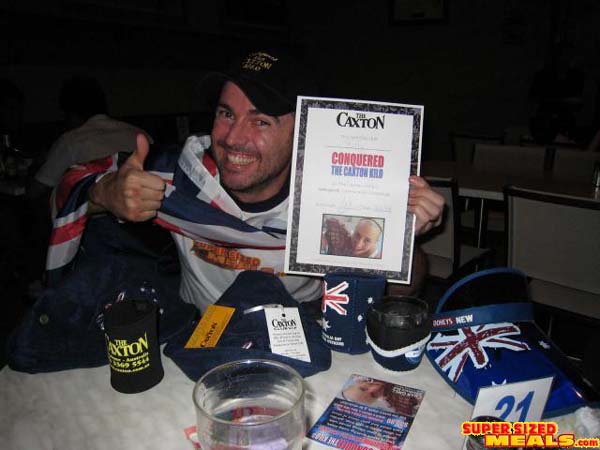 The certificate and a bevvy of other prizes!

Turns out they had 25 people attempt the challenge that day for lunch, and we were lucky enough to score the last 2 hats. One guy ate the steak in 7 minutes! Something tells me this challenge will be back on again next year, and I'll be there for sure!

The prize pack was awesome. Stubby coolers, certificate, hat, but the best part was that I'm now an official VIP member of the Caxton, which gives me 50% off meals on a Monday, and 20% off Tuesday - Thursday. Now that is awesome. Nice work Caxton, an awesome meal, awesome challenge, and now as a VIP member, I'll be coming back often to check out your awesome menu! Woo hoo!