Griffin was on a mission to create Brisbane's Biggest Burger. Inspired by the likes of Denny's Beer Barrel Pub, he set out to design, create and consume the biggest burger possible. All good things start from humble beginnings, which is why he started the project with this prototype: The Super Whopper. Fashioned from the Hungry Jacks "Whopper" (Hungry Jacks = Australian Burger King), his creation weighed in at over 5kg (11lb's). The Burgers aren't better from Hungry Jacks!

Friday the 7th, I bought the rest of the ingredients needed. From Coles Sunnybank - 3 tomatos, 1 onion, 1 lettuce, mayonnaise, tomato ketchup, Colby cheese (a mild cheese), pickled cucumber (not in the photo below) and hamburger helper (to help bind burger patty). From Fine Freddy's Meats at Sunnybank - 4kg of regular mince. Plus some garlic and pepper for the meat, which I already had on hand.

I had to do some 'reconnaissance', so bought some Whoppers for a comparative photo, and for the ingredients. I know I could have gone to the Hungry Jacks Website, but it is better to get a real burger than just using the fake burgers they use on fast food menu boards.

I bought three Whoppers with cheese from the Garden City Hungry Jacks to hopefully get one that wasn't totally squashed. Fortunately two managed to survive their wrapping and bagging procedure, and are in the photo above.

Ingredients - bread, meat patty, cheese, tomato, lettuce, onion, tomoto ketchup (not tomato sauce), mayonnaise, dill pickles/cucumber.
Lucky I wasn't just going by the ingredients list on the HJ website, because the list cuts off before it includes 'onion'. Besides, this was fun recon work, because now I was 'forced' to eat it so as not to waste it. :)
Every component was being talked over and planned over a month or so, but the sticking point was the bread roll. I couldn't find anything in bakeries or at Coles that was big enough to make a 5kg burger. I would either have to get one custom made from a bakery, or make one myself with one of those homemade bread mixes.

A stroke of luck one day during the first week of March 2008, I found at a Woolworths store a 30cm diameter flat damper roll. Okay, so it wasn't regular bread, nor did it have sesasme seeds on it, but for a prototype to see if this burger project was do-able, it would do.
I had four days to go for it now, with the expiry date on the bread forcing me to take the plunge after months of talking and planning. Friday the 7th, I bought the rest of the ingredi
ents needed. From Coles Sunnybank - 3 tomatos, 1 onion, 1 lettuce, mayonnaise, tomato ketchup, Colby cheese (a mild cheese), pickled cucumber (not in the photo below) and hamburger helper (to help bind burger patty). From Fine Freddy's Meats at Sunnybank - 4kg of regular mince. Plus some garlic and pepper for the meat, which I already had on hand. 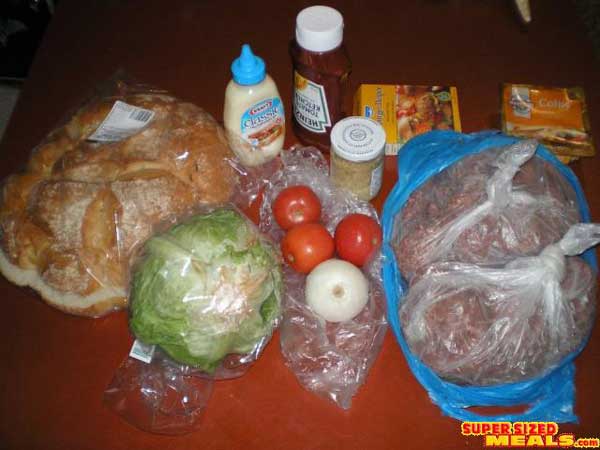 Working Saturday morning, the construction project would begin that evening when I got home.
First up I cut the bread in half and toasted each half like HJs do. Then the meat was shovelled into the electric frypan, mixing in by hand the hamburger helper, garlic and pepper. It was shaped into a big round patty and slow cooked (with the lid on) on one side before turning it over and slow cooking on the other side. It took about 1 1/2 to2 hours to cook.

Okay, as disgusting as this photo looks, it is just showing the meat just before it was turned over, so the top has already started to cook, giving it such a repulsive look. I managed to scoop out about half a litre of fat and juices while it was cooking, which I needed to do to turn it over without making a mess - I had to put a dinner plate on top and flip the entire frypan and plate over (over the sink) and then slide the meat back into the frypan with the cooked side up. The uncooked side was a bit too rounded, so it split a little, but was thick enough to hold together through the rest of the cooking process. 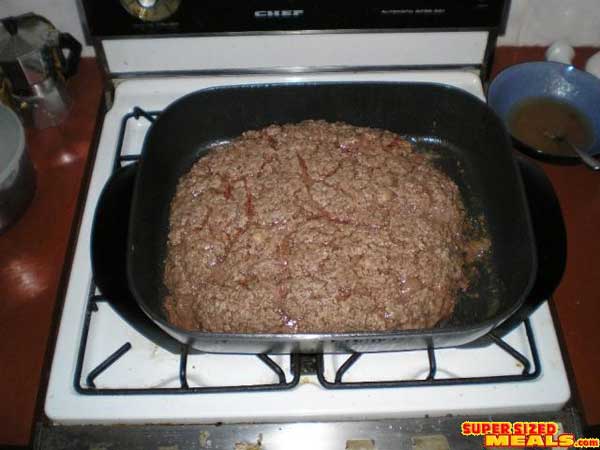 While the meat was cooking, I cut up the rest of the ingredients and watched some TV.
When I thought it was cooked, I cut open a bit in the middle to make sure, and sure enough it was.

The same procedure was requred to remove it from the frypan, but I put the base of the bread on top of the meat first before placing a Microwave tray on top to flip it out (I didn't use a dinner plate because it wasn't big enough and wasn't flat enough to see the bread at the bottom). 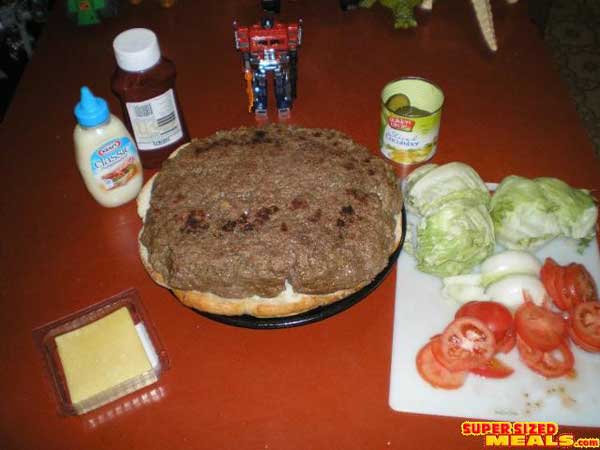 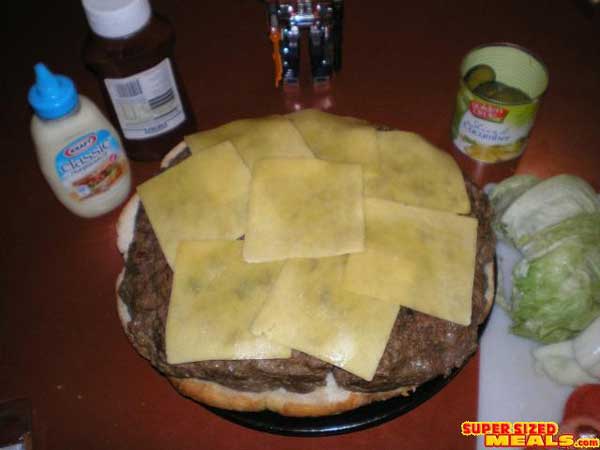 Then the onion and tomato. 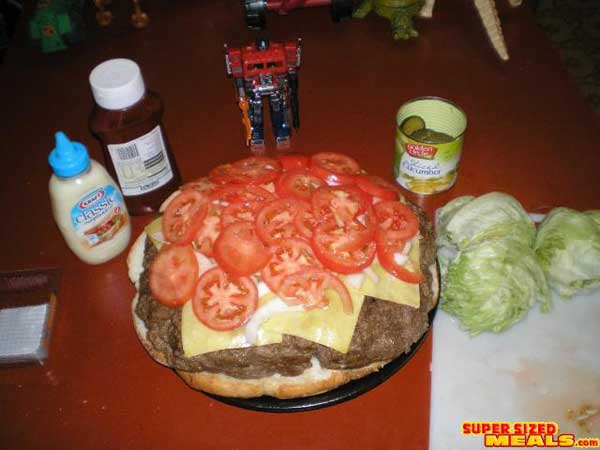 The mayonnaise, tomato ketchup and pickles. 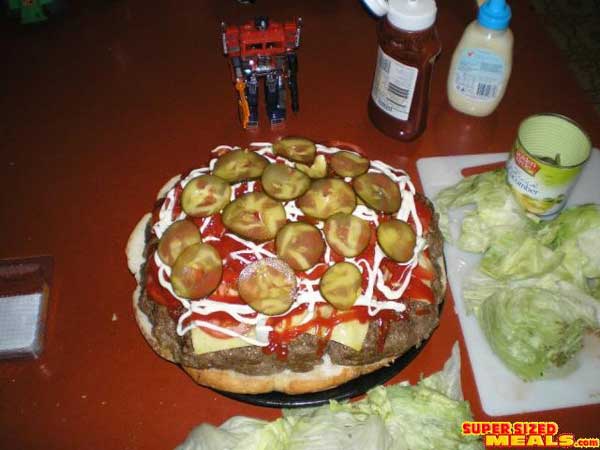 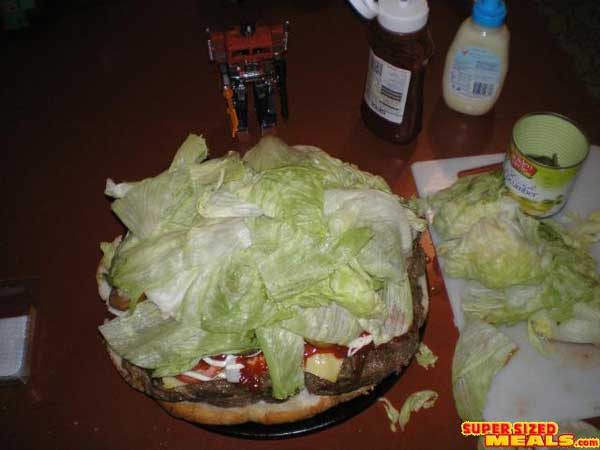 And with the top of the bread roll, we get, the Super Whopper with cheese. 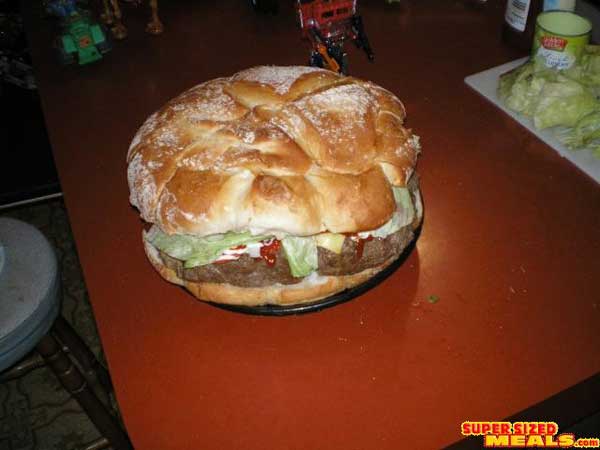 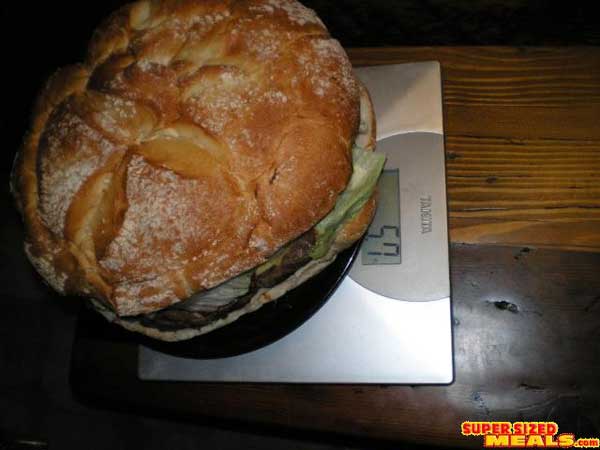 Some extra shots of it from different angles. 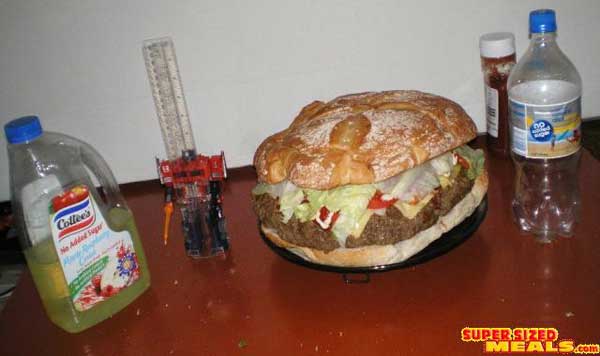 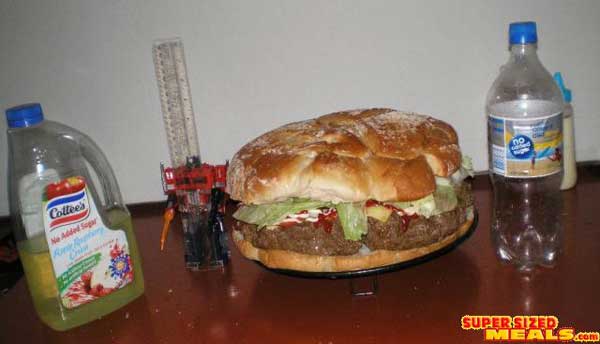 So how long did it take to eat it? I had a quarter on the night I made it (and realised how impossible it would be to eat a 5kg burger in one sitting), and then a quarter the next day for dinner. I managed to convince a friend to take a quarter that night as well, and I finished off the last quarter on the Monday for lunch. So it took about $40 to make, and would have lasted four days (it probably wouldn't last much longer than that before going off).

Through this whole prototype procedure, the things I would do differently is get more cheese, use less meat so that it isn't as thick on the burger (even if it means it isn't as heavy), flatten the meat more so that it doesn't split during cooking, get some sesame seeds to sprinkle on top, and make sure I have bought things like a soft drink can and the actual Hungry Jacks burger for better size comparisson photos.

The main thing that bothers me is the sheer thickness of the meat to make a 5kg burger from a 30cm diameter bread roll. So in future I would do burgers that have two patties, so that each one is half the thickness and can have more stuff in between them to break up the big block of 'meatloaf'. If the meat isn't as thick I may not need to add something to it for flavour, thus better replicating the HJs burger that is allegedly 100% beef in their patties.

I do plan to go back and do another Super Whopper, a better one, but would probably be a Super Double Beef Whopper. Next project though will be either a Super Aussie Burger, or a Super Bacon Double Cheeseburger Deluxe - both are Hungry Jacks Burgers, and have lots of different items in them to make the Super Burger more interesting to consume.