Excited about sugar replacing HFCS? Well this will blow your mind! Not only will you get a mega sugar rush, you can do so with a selection of over 100 different flavors!

At the same time as New York is trying to pass a soft drink tax, ABC News is doing an expose on Mountain Dew Mouth and doctors are urging all Americans to cut down on soda, Coca-Cola is debuting a new soda fountain that can hold more than 100 sodas. That's ten times more than current soda fountains. 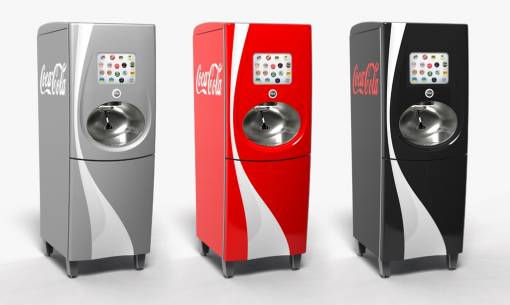 The 100 Flavor Coke Soda Fountain
Currently, fountains work through syrup bags. The restaurant buys a bag (actually, a bag in a rectangular box) from Coke or Pepsi, hooks it up to a soda line and then the fountain combines the carbonated water with the syrup to create your soda. The machines are limited by soda lines, which tend to gunk up with sugar mold, and by bulky soda bags that weigh 30 pounds or more.

The new Coke machine is completely different.
The new fountain is like an ink printer with space for hundreds of cartridges. Each cartridge contains a concentrated formula of ingredients. When you press your choice, say Diet Coke, the machine will tell cartridge 12 to release three squirts, cartridge 81 two squirts and so on, then it combines it with carbonated water and viola! The same drink as old machines.

The new fountains can hold a lot more of these little cartridges, so they can handle a lot more flavors. Coca-Cola promises 120 different drinks, but there could be even more as the technology gets better and the company gets more confident. Hypothetically, the machine should be able to act as a bartender too, allowing customers to get a Shirley Temple or Roy Rogers in addition to regular drinks. All it would take is a cherry syrup cartridge.

The first new fountains are rolling out in Atlanta and California in a month. Assuming tests there go well and the public loves its overwhelming choices, the new fountains would come to Kansas City next year.

Coca-Cola's product list is more than 2,800 beverages long so the company will have no shortage of drinks to pick for the new machine. The main problem is how Coke protects its customers from the paradox of choice, when too many options overwhelm our brains and shuts them down from making a decision.