A preface. This is the true tale. There is direct quotes and we swear a lot.
Ok

I first found your web page about November-October. The first impression was... good god, I need to eat. And so the story trickled down through my filter of friends. Among these friends was Russell. 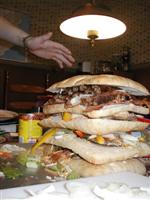 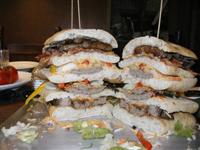 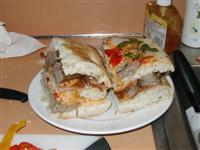 Russell and I came to the same conclusion, we have to be able to replicate this. And so for a month we kicked the idea around, because it's not every day you can just make a f***ing huge sandwich. And around October 30th we found our excuse. The U.S. Presidential Elections, and we found our digesters, the intellegencia of AP (Advanced Placement) Government. Because we know that this thing was going to get out of hand, and we wanted that sucker gone, to stop little kids from killing themselves. The five amigos are as follows; Russell, who is an ex-mow-hawk guy who now wears punk with a heart of gold. David, who is our blond Thomas Jefferson and brought those chips that no one in their right minds would touch. Colin, who is one tall lanky fellow and provided the inappropriate humor for the night. Simon, who is our revolutionary, see Che Guevara, and was a light weight, and the finest of the bunch Andy, a Harrison Ford Colin Farrell mix.

The night of November 2nd started with Andy driving his pimping Rav4 out to Russell's house. Once he arrived Andy got a call from his mother saying to come back home you need to finish this college essay. "Damn it woman this is no time for jokes there is massive amounts of meat to be cooked."

Needless to say I did as I was told because I do have a life, and while the f'ing huge manwich was not to be missed, I didn't it want to be my last memory. And so Russell and I took his car to my house, because we were to go shopping after. Andy done with his work decided to ask him mother a question? "Mother dearest, may I take that flank steak we have in the freezer?" That is right, you heard correctly, flank steak. Of course it was taken and we knew from then on our goal was set. Trash the "gamecube manwich" as it came to be known and build the scariest mother *censored*er yet to be seen. And so armed with this idea and full manly testosterone we went to the Giant.

No words can describe the euphoria that we experienced. It was kids in a candy store, except viral men among meat. Memorable lines from that night. "Dude, do we have enough Bacon...?" "HELL NO!" "Damn it man, we need more cheese!" "Andy, near beer has alcohol in it, we can't buy that yet." The giant just had it's shit trashed. Like vikings to Lindisfarn we pillaged the sacred condiments and fillings, the gods were pleased.

Returning to the house at 5:15 we find the idiot Colin just walking back and forth in the driveway. He was scared to go in uninvited. We hall his ass in and stock the freezer with the massive amounts of soda also purchased at the Giant. The making of the sandwich began. Colin used his kung-foo skills and sliced and diced the peppers and onions. We set David to work writing down the calories that would go into the sandwich, this involved Andy screaming "HOLY SHIT, BREAD HAS SO MANY *censored*ING CALORIES!" And David with the classic line, "Dude, we are all going to die tonight."

It was Russell's house so the meat cooking went to him. Our primary sources of meat would be 6 burgers, 1 flank steak, 30 strips of bacon, and 10 sausages. Simon, the perpetual political activist that he is showed up too late to really help with the cooking, AND HE HAD ALREADY EATEN... the boy is going to pop.

We then start placing bets on the height of the sandwich. Colin and David have the great idea to cut the middle piece of bread in two, just for another meat layer. Later on Andy the even greater genius cuts the top piece in half, for the bacon layer, which turned into the sausage layer. Then follows the cooking of the flank steak.

The thing had to be defrosted in the microwave first, then we put it in a pool of burger fat and fried the sucker. Needless to say the steak alone was delicious. Then the construction began. While Russell was being the woman, David, Colin, and I began the construction. We first started with a blueprint then just dove right in. We started with the 2nd and 3rd layer, because we had the burgers cooked. Not much variation on a good theme, meat, cheese, cheese, cheese, nasty greens. Russell then begins to cut the steak and the bacon comes out of the microwave. As you can see, room is running out fast. Bacon covers too much surface area... solution? BACON UP THAT STEAK BOY! The top layer looks barren... we have forgotten something... SAUSAGE UP THAT BACON BOY!!!

David was right, tonight, we all are going to die. Onions and peppers are scattered, Russell has a very scary shed where he keeps drinks, and we return to a prince of a manwich. There is much rejoicing and haggard looks. Then we remember one thing, WE ARE MEN!!! Incidentally Russell has a foreign exchange student living with him named Ruven. A haughty salute is due, and one is presented. The sausage is added, the rest of the worthless greens lay by the wayside. What was once a full counter is gone. A full 4 square feet of surface area has been assimilated into a 12 x 8 x 10 MANWICH!!! It is done.

In homage to Doug and James we skewer the thing... however she does stand on her own. Our next and final clairvoyant thought was, "Dude, we need a game system." Russell has a XBOX, almost 4 times bigger than a gamecube. The picture stands. We all gather, Colin just moronically happy, Russell demonically happy, Andy beams with pride, Simon looks like Hannibal Lector, David wants food, and Ruven... well Ruven is ready to shame us worthless Americans. Our thoughts then turn to digestion. We logically conclude that 6 pieces will be needed for six Kings of Men. The cross section is beautiful. We also conclude that no one present, with the exception of Colin, will be able to fir their mouths around such a thing. Again, Andy saves the day. Thus became born the Sausage Half, and the Steak Half.

We move downstairs taking two of the 4, 12 packs with us and feast. In our feeding frenzy we turn on the TV, and watch the election coverage. And so draws to a close what very well may have been one of the greatest nights of my life. The manwich as it is now known to all of the School, totaled to approximately 12,000 calories. Each man had 2000 calories, the recommended amount per day. Incidentally while us Americans talked and yelled over politics Ruven sat silent. Thinking he doesn't care we let him sit in peace and continue. Just as I start on my second half I see Ruven sit back with a smile and a burp. In 10 minutes the crazy German had eaten his whole share. 2000 CALORIES IN 10 MINUTES!!! Needless to say, it was a humbling moment, which is shrugged off by downing 3 Doctor Peppers and 2 Root Beers in 5 minutes.

The next day returning to class we tell Mr. Deane, our teacher, of the feat. He chastises us about good living and not honoring the electoral process with early delights. But did give us each 1 point of extra credit for every 100 calories consumed.

And so Doug, that is the story. We have the crude scratch paper that has on one side the original recipe and the changes. The other side has the calorie count David and I worked on, as well as our plans for the sandwich. As soon as I scan that in I will send it off to you. Again, thank you and James so much for making our lives better, the full medley of pictures will be up your way soon. -Andy


Facebook comments
Andy's Manwich | 0 comments | Create New Account
The following comments are owned by whomever posted them. This site is not responsible for what they say.