Thoughts On Eating a Party Sub
Yes, Jason has camel toe.When Jay and I first discussed this little event I was gung-ho. Probably because I was unemployed and couldn't afford to eat. Free food for a week sounded pretty appetizing. Now that I see the 4.5 feet of sandwich cut up and stored in my refrigerator I am having second thoughts about this. Mainly because I let Jay put onions and mustard on the sandwich and those are two of the grossest things on the planet. My prediction is that I will enjoy it for about a day, get kind of tired of it, vomit, have to force feed myself the second half, have my stomach pumped, and never eat a sub sandwich again. So... we'll see. 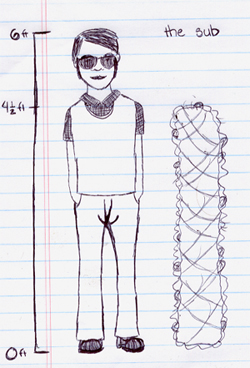 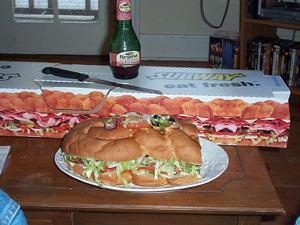 Jay and I just picked up the subs. It looked a little intimidating when we had all nine feet stacked up. Regardless I am still excited and am going to eat as much as possible tonight. The fewer days that I have to carry this sub to work the better. 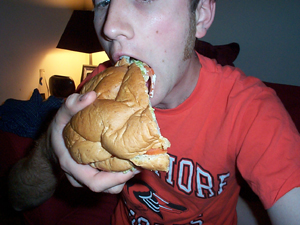 Oddly enough I woke up craving the sub. My entire apartment smells like mustard and oregano. I had a few bites for breakfast, another six inches or so for lunch, and I've eaten sub three times since I got home from work. I am glad to say it is going well and is not nearly as hard as I had expected. Tonight I shall pray that sub goodness will fill my dreams. 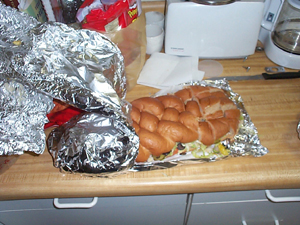 Okay, this whole sub for breakfast thing isn't really cutting it. I had maybe two bites and had to break down and eat a breakfast bar. It felt nice to eat something besides sandwich or potato chips. It also kind of sucks since I am out working on construction sites and don't have a refrigerator or a cooler. By the time the lunch bell rings the sandwich is just a moist ball of salad wrapped in aluminum foil.

When I planned this, I expected to be almost done with the sub by Wednesday night. I just finished the first half at lunch. I have a long way to go.

I have gained four pounds since this whole fiasco started. The sub sandwich diet is a damn lie.

I thought today would be my last, but I couldn't get it done. I'm staring at the last, maybe, 8% of this sandwich and I can't do it. I'll have to save it for tomorrow. I wish I were dead. 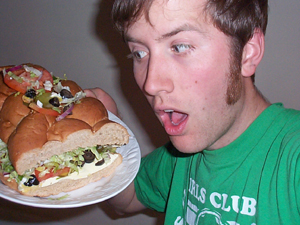 It's been a week and I really haven't thought about it too much. I'm trying not to. I have had no desire to eat a submarine sandwich all week, which is unusual for me. I have a feeling I won't have the craving again for a while. I've had my fill.

I tried to add a second experiment to this. Would eating "clean food" for a week make me taste better (you know what I mean)? I proposed that Katie sample the goods on the Monday that we started and then again on Friday. She just gave me the whole "Do you really think these things in your head" speech. Yes, yes I do. And thanks for ruining my Plug article's surprise ending.


Facebook comments
The Party Sub Challenge - Jason | 0 comments | Create New Account
The following comments are owned by whomever posted them. This site is not responsible for what they say.