A "Burger with the lot", Cairns, Australia
Contributed by: Billy

Found this one on flickr. A towering works burger with 3 bamboo sticks about 30cm long to hold it all together! How much for this one? Only $5.00!! There's a great story that goes along with it too

...The picture above is the Burger with the Lot and very much needed the three bamboo sticks measuring about 30cm to support this towering mass of food. Stuart had to turn his head to a 90 degree angle to even begin to eat this monster and was forced to take numerous bites to get the full impact....

While on holiday's at The Great Barrier Reef on the Queensland coast we stayed at a beuatiful resort which charged $15.00 for a dodgy burger and chips which was cold when it arrived by one of the 7 pools. Half way through the holiday we hired a car and decided to go exploring... On the first day we drove to Cairns and back. On the second day we decided to take a drive to the Atherton Tablelands. We hadn't had breakfast that morning so at about 11:30 we started to get hungry and wondered where we could get something to eat. We happened to stumble across a small cafe in a small town with not much more than a post office and a petrol station. As soon as we walked in I noticed that something was different. The cafe had some aztec accents and the friendly lady behind the counter chatted to herself and everyone else. We placed our orders for a Burger with the Lot, a Plain Burger and some chips to share. As we were waiting for our food I noticed that people seemed to come in as much to talk to this friendly woman as for the fabulous food and coffee. Some soft 'La Bumba' music started to play. When she brought out the food we were both stunned and amazed that she could fit that much food in between a bun! 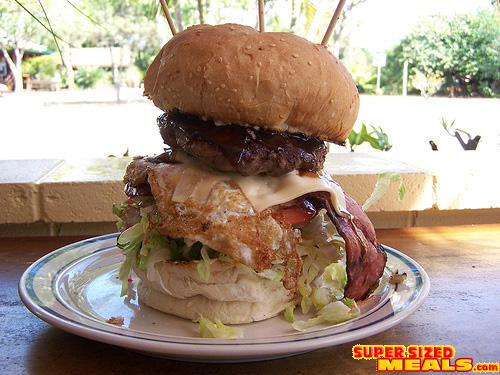 The picture above is the Burger with the Lot and very much needed the three bamboo sticks measuring about 30cm to support this towering mass of food. Stuart had to turn his head to a 90 degree angle to even begin to eat this monster and was forced to take numerous bites to get the full impact. I am embarressed to say that after finishing off every bite of this monster he then polished off some perfectly cooked chips. After finishing our mealing and enjoying the view for a few minutes we made our way back to the counter to pay a mere $5.00 for this burger. The lady said to me that she had put the music on to make Stuart be romantic for me. The lady then told us that she was originally from Mexico and began to talk about love and relationships and how important it is for people to stick together. She seemed genuinely saddened by the growing trends of divorce and seperation. We were taken back by this woman's capacity to give both in her cooking and in her thoughtfulness and wisdom. This is one burger we will never forget!


Facebook comments
A "Burger with the lot", Cairns, Australia | 0 comments | Create New Account
The following comments are owned by whomever posted them. This site is not responsible for what they say.