One of our readers Eaton (who sent in the story about the 12-pound Canadian Emperor Crab) sent this one in. Circa 1997, this is the earliest Supersized Meal we have on record. The challenge? To conquer the Guinness World Record for the World's Largest Burrito.

Things were already bustling in Mountain View's Rengstorff Park by the time I arrived at the site at 10 a.m. Two hundred twenty bingo tables had already been set up, the vendors were already selling commemorative hats, and a man known as Johnny Guitar was onstage singing traditional burrito-building ballads. Official volunteers, each charged with managing a 32-foot length of the behemoth, leaned pensively against the ropes, waiting. 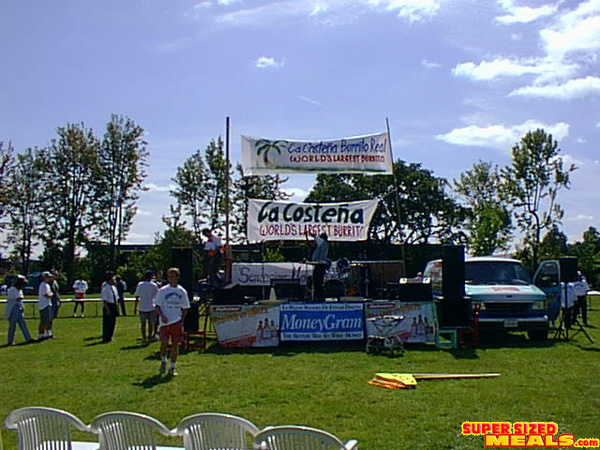 Just prior to 11 a.m., a truck loaded with 40 pound boxes of assorted fillings arrived. In a few moments, more than 4,500 pounds of tortillas, rice, beans, chorizo, and salsa had been unloaded and were awaiting preparation. 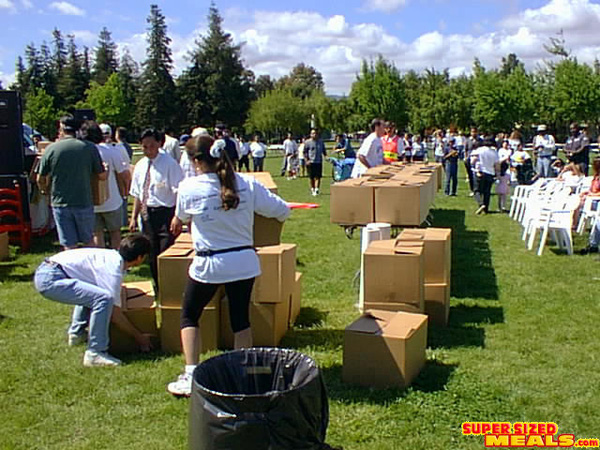 Next, two long rolls of aluminum foil were unrolled across the entire expanse. Burrito building was imminent. 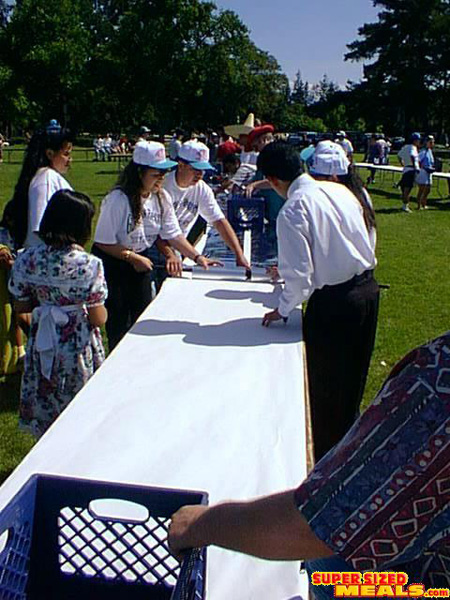 By now hundreds of people had arrived at the park ready to participate in the construction. We all donned plastic gloves and lined up at the center of what would soon become the world's largest burrito. The tortillas were broken out and laid down with care, 12 per table, as we had been instructed. Since there weren't enough people to tend to the entire 3,500 feet of burrito, we worked in sections, building a few hundred feet at a time. After the tortillas were distributed, the beans were spread out, followed by the other fillings, in assembly-line fashion. Once the long thin line of wholesome goodness had been arranged properly, the call went up to start rolling the tortillas. Once your section was complete, it was time to leapfrog the other workers and start again. 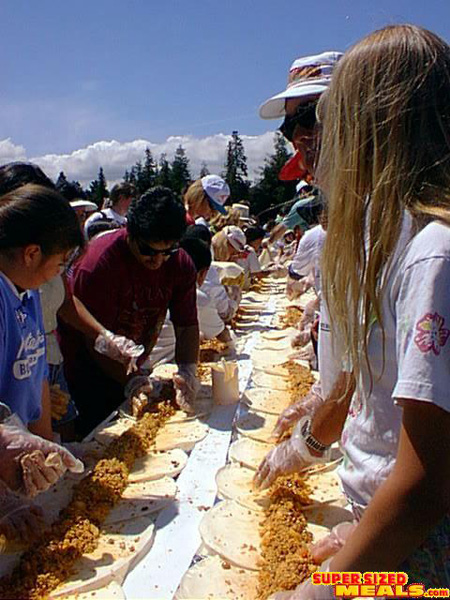 At first the long line of tables was daunting. It didn't seem possible to get it all done in the time allotted [one and a half hours] by the health department. I was told that if the burrito wasn't completed in a set amount of time, it would no longer be officially edible. That would be a tragedy of world-record proportions. We soon got the hang of it, though, rolling burritos like most highly skilled of burrito artisans. At 12:30 p.m. the final section was done, an accomplishment greeted by much fanfare and a New Year's Eve-style countdown. 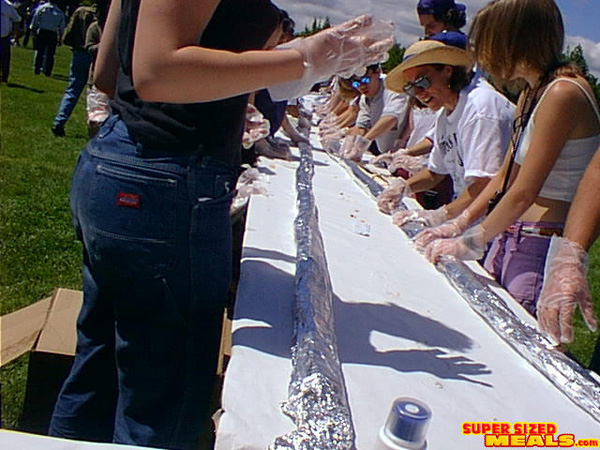 After the celebration subsided, the burrito was measured. The officiate, followed by a gaggle of camera-toting, burrito-starved people, began walking the tables. Feet were counted off one by one as the excitement built with every step. By the time the halfway mark was reached, it was clear that the record had been broken. Minutes later the beast's actual length was announced: 3578 feet. 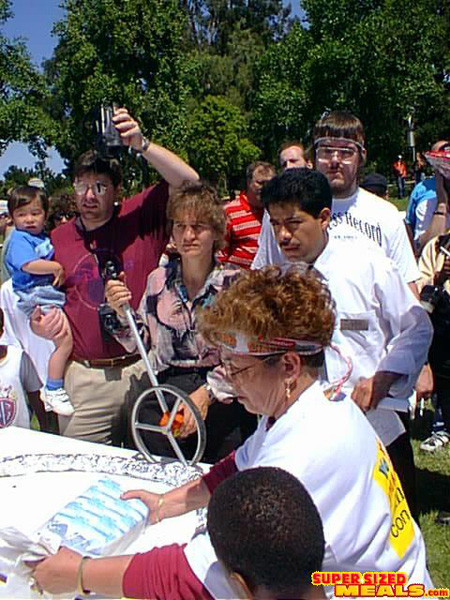 Now it was time to eat.

The long, hot morning had worked up everyone's appetite, and a full-on burrito feeding frenzy was quick to erupt. We ravaged that fattie like a pack of wild dogs. I personally must have eaten half a meter.

Performing a few simple math equations, we were able conclude that if you ate a foot of this burrito a day, you'd be able to survive in a satisfyingly bloated fashion for almost 10 years. Opinions were divided on whether that would be a punishment or reward.

Despite the hearty appetites of everyone involved, a substantial amount of food was left over. Soon people were filling enormous paper boxes with foot-long lengths destined for the freezer. A couple groups carried six-foot lengths like fire hoses to waiting pickup trucks. As I drove home, nursing my sunburn and holding my distended gut, I tried to imagine how the folks at La Costeña could possibly top this. Maybe someone else will break the record and force them to do it all again next year. 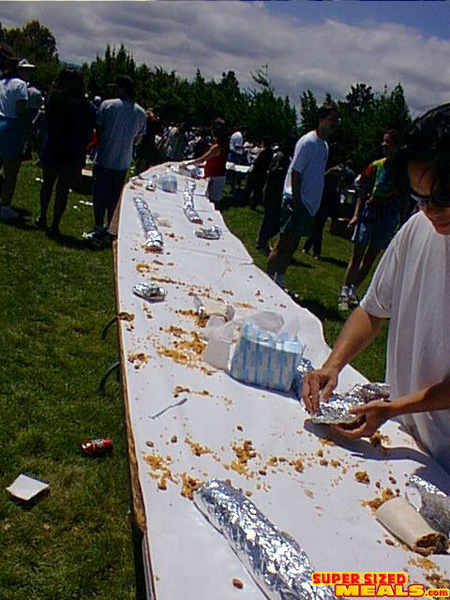 One can only hope.


Facebook comments
World's Largest Burrito at Rengstorff Park | 0 comments | Create New Account
The following comments are owned by whomever posted them. This site is not responsible for what they say.