Those fun loving people in Sac City are at it again. Forty-four volunteers and five staff members of Noble Popcorn Farms built a popcorn ball that weighed 3,100 pounds on Sat., June 12th to promote popcorn and to create a tourism attraction for the community as it heads into its Sesquicentennial celebration in 2005. The ball surpasses the old Guinness Book of World Records of 2,377 pounds set in September of 1995. 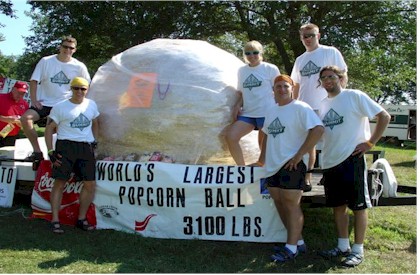 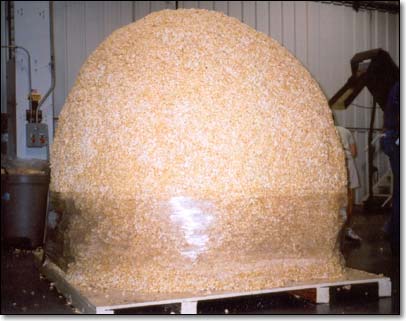 This is not the first time for these Sac County residents to attempt a record. In April of 1995, they built a 2,225-pound popcorn ball to secure the title with Guinness- later to be outdone by the Boy Scouts in September of that same year. In August of 1997, the one ton + Sac City ball met its demise as it was blown up at the Sac County Fair. This time the plan is to keep the culinary delight, which will eventually be housed in its own building near the city's museum complex, creating an attraction for everyone to enjoy right on U.S. Hwy. 20.

This wild idea to promote one of Sac County's oldest products - popcorn - and to re-create a massive ball became a culinary, mathematical and laborious challenge. The recipe was perfected and prototypes built. And then the fun began at the Noble Popcorn plant in Sac City! Since the plant is notorious for it's Cedar Creek flavored popcorn, it seemed the perfect setting for a task such as this. 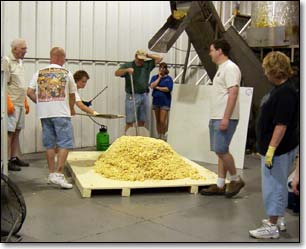 At 8 a.m., the first group of rubber gloved clad volunteers began the task of melting the sugar and syrup, popping the corn and packing the steamy popcorn mixture into a round shape. Seven hours and 13 minutes after the first batch was cooked, exhausted volunteers and staff celebrated their success with a massive ball weighing 3,100 pounds and standing over 7 feet tall. The ball also measures 23 feet in circumference.

Dan Martin, Plant Manager at Noble Popcorn, reported that the group used 910 lbs. of popcorn, 1500 lbs. of sugar and 690 lbs. of syrup. They punched, packed and carved the ball into shape, all the while getting stickier and sticker. 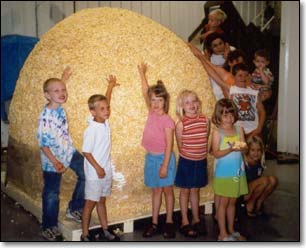 Among the many volunteers, Iowa Secretary of Agriculture Patty Judge helped construct the popcorn ball. "I'm pleased to be able to help with this fun community-spirited event. I've been teased all week about what I was going to do this Saturday and here I am having a great time with the volunteers. It's good Iowa fun." Secretary Judge spent over two hours working with the hot sticky popcorn substance and joining in the spirit of the day.

"It was a jubilant crowd when the final weight was announced at the end of the day, we met this challenge head on and succeeded," said Shirley Phillips, Director of Sac Economic & Tourism Development. Many of the volunteers were tired and covered from head to toe with the sticky substance, but posed for pictures with the huge popcorn ball at the end of the day. 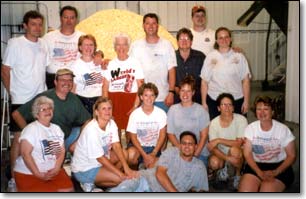 Dan Martin already has the first engagement booked for the culinary delight - it will be featured at the Sac County Relay for Life on June 19th in Sac City. Since RAGBRAI will be visiting Sac County this summer, the ball will be an added feature for the riders. The ball will also be featured in area parades. Even temporary "World's Largest Popcorn Ball" tattoos were designed especially for the occasion and can be purchased through the Chamber Main Street Sac City office.

To qualify for the Guinness book, Agricultural Secretary Patty Judge will verify the recipe and certify that the popcorn ball was edible, two members of the Iowa DOT vehicle enforcement unit were on hand to weigh the ball throughout the day and will verify the actual ending weight, a video recording was made and many photographs were taken. This will all be sent to the Guinness Book of World Records office in England for recognition.


Facebook comments
World's Largest Popcorn Ball | 0 comments | Create New Account
The following comments are owned by whomever posted them. This site is not responsible for what they say.