While this isn't a "Supersized Meal", this guy has to eat them every day! I wonder if we could recruit him as our official product tester? :)

Matt Chaffee, of Idaho Falls, Idaho, must eat 6,500 calories a day to get his weight over the 100-pound mark. He has to wear heavy clothes to help him conserve heat and keep from getting sick.

IDAHO FALLS, Idaho - A 5-foot-9, 22-year-old man who eats 6,500 calories a day — two and a half times the average intake for an adult male — has earned a special reward for breaking the 100-pound mark:

Dinner out from his mom.

"I'm a medical mystery," said Matt Chaffee, who weighed in at 101 pounds on Saturday. "I've accepted it." 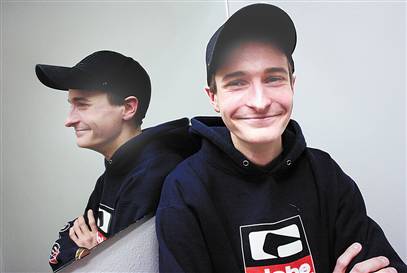 Chaffee, who has a 26-inch waist, had several health problems as a newborn. One of them, pyloric stenosis, prevents food from emptying out of the stomach. The condition and ulcers he developed in his esophagus reduced his ability to gain weight.

Chaffee weighed 8 pounds when he was 4 months old, and 17 pounds when he reached kindergarten, his mother said. He was up to 85 pounds at age 14, but couldn't participate in some activities, including swimming.

Since turning 18 his goal has been to go over 100 pounds. He achieved that on a diet that included 5,000 calories a day in protein shakes.

"He was so happy," Kelley Chaffee said.

Sandi Birch, a registered dietitian at Eastern Idaho Regional Medical Center, said most of the people she deals with are not trying to put on weight.

"Its far more common to have the opposite problem," she said.

Matt Chaffee is an Eastern Idaho Technical College student and WinCo Foods cashier who works out five days a week and can bench press 130 pounds. He uses his bike for daily transportation.

I used to be "skin and bones" growing up...but now..I'm about normal for my weight. Actually I need to lose a little! I'm a normal eater.