It's apparently so dangerous, it carries a health warning. The 1000 calorie "Stonner" Kebab is a pork sausage wrapped in doner kebab meat and deep fried... Dunno, this doesn't look like a usual Kebab to me...

IT’S a gut-busting 1,000 calories and so fatty it carries a health warning — but a Scottish chip shop is still selling 100 of these deep-fried “Stonner Kebabs” a week. 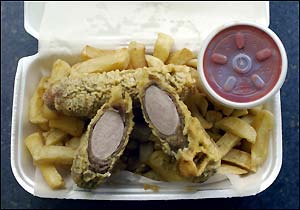 He limits customers to one a week at his Ruby Chip shop in Glasgow because of “severe health damage”. 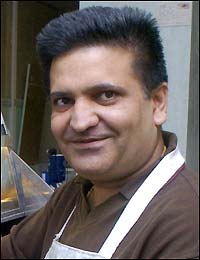 Cooking up a storm ... the Stonner Kebab's creator Sati Sangha
Sati said: “They are flying out of the friers — I wanted something new. It’s popular and filling.

Health experts are not impressed with the Stonner – cheekily named after Scots slang for a state of arousal. Nutritionist Michael Lean said: “It’s a stupid thing to produce.”

If anyone lives nearby, let us know we got the right place!

[ Reply to This | # ]
The 1000 calorie "Stonner" Kebab, Glasgow
Authored by: Anonymous on Friday, October 10 2008 @ 02:16 pm UTC
Hi Billy, I'm Steve , The last time I was over at Yorkhill sch the Ruby was closed down . I was using the Ruby while my son Jake was in the hospital about 4and a half / 5 years ago when Saty had just came up with The Stonner. It didn't weigh 3lbs tho' even with chips . I preferred it with fritters !
Saty also did a black pudding stonner and a haggis stonner . I have to claim a bit of credit to giving Saty the idea of putting his own recipe chilli sauce ( which I tried to get him to merchandize in bottles coz it was mind blowing !) with the stonner suppers
During the times I went I saw a bus load of american tourists stop outside and pile in for the legendary Stonner