Big thanks to Gary and Rhiannon for sending this one in... we all know what a cake with icing looks like... nothing special there... but what if there was a cake that looked like a normal cake, but had 6lb's of meaty goodness in the center? Behold! The MEAT CAKE!

This, my friends, is my culinary epiphany. Since I've submitted it to the b3ta weekly newsletter, it's spiralled out of control! 280,000 hits a day on this thing! Hello, bulletin board people! And thank you for featuring me today, Rocketboom!

Feast your eyes on this! 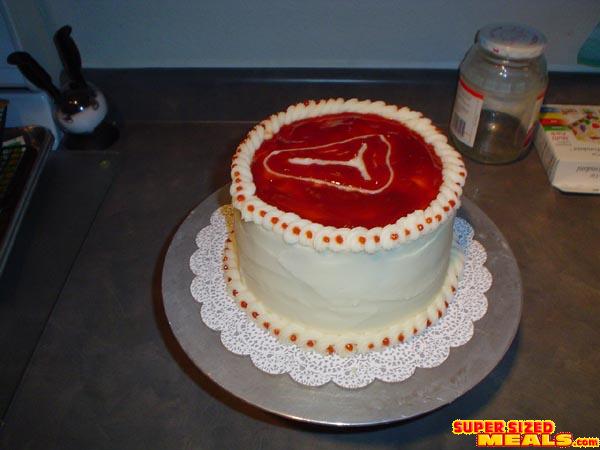 A cake...with a t-bone drawn on it? (And yes, I'm QUITE aware that it looks more like a uterus than a T-bone. I'd never drawn a t-bone steak before) Has our intrepid chefstress lost her mind? NO, my friends, NO! because THIS....is MEAT CAKE. 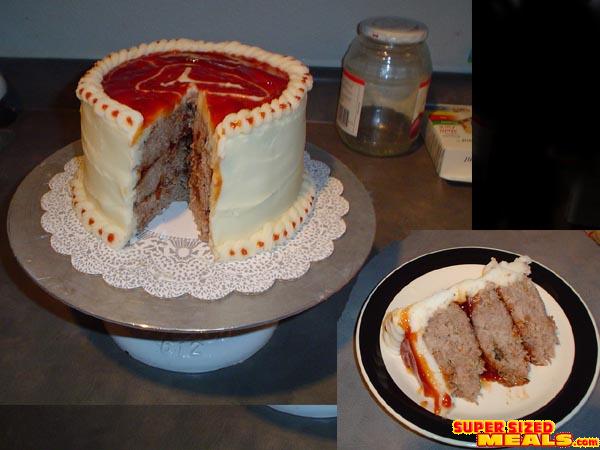 Okay, see, this bears some explanation. A coworker is getting married next week, and we were talking about wedding cakes (I had just done one for two friends of mine). He asked if I could do one for him - totally joking of course. "Oh, sure, what kind of chef are you that you can't pump out a wedding cake on just two weeks notice??" He went on to describe his ultimate wedding cake. "I hate that wedding cakes are all girly. There should be like a groom cake to go with the traditional wedding cake. A guy's cake. Like..made out of meat."

A lightbulb went off in my mind. "I could TOTALLY do that," I exclaimed. "A meatloaf! With mashed potato frosting! OH MY GOD!"

"Yeah!" He was catching on. "And like, gravy between the layers and melted cheese for the writing!"

"Hmmmm. No, ketchup glaze," I decided. "I am so totally going to do this," I suddenly realized.

So today I did. Here's how it went down:

The first thing I needed was the meatloaf. I make a pretty yummy meatloaf, but I never make it the same way twice. I knew I needed a dryer meatloaf, so I would need a lot of breadcrumbs. Into a bowl, I mixed:
6 # hamburger, 80% lean
3 large AA eggs
2 TB minced garlic
1 TB minced dried onion
1 TB basil
2c bread crumbs
2 TB kosher salt

I knew there was going to be a lot of fat left in the pans, and I am lazy, so I used disposable cake tins. Three 8 inch rounds. There wouldn't be as much fat if I'd used leaner meat, but the grocery store didn't have any leaner meat in chubs, and I didn't want to spend a million dollars on this anyway. Next time I'll cut the beef with something a little leaner, or maybe bigger chunks of bread. I wasn't too concerned about it, since this was only the trial run to see if this idea is even worthy. I evenly distributed the meat into the cake tins. 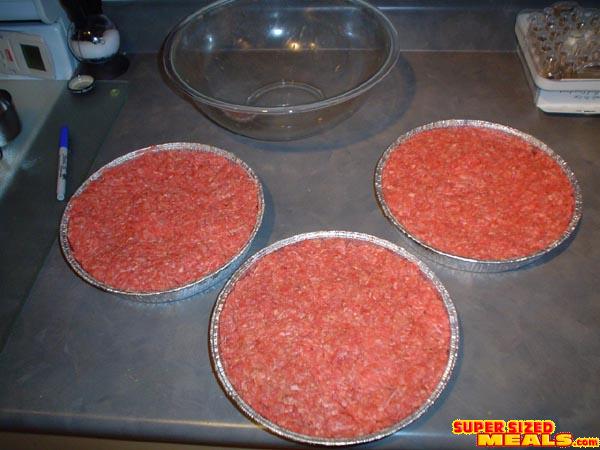 And then into the 400 degree oven until they reached an internal temperature of 170 degrees, which was about 45 minutes. I glazed two of them after about 20 minutes, but this was an act of sheer optimism, as there was a better than average chance I was going to have to cut the tops off anyway, to level them.

It wouldn't do at ALL to have them bathing in yukky grease once they were out, so I pulled them out of the tins right away and let them cool on draining racks. Yep, glazing was too optimistic. The meatloaf bound up a little tighter than I would have liked - I think next time I would go with three cups of bread crumbs instead of two. I watched an episode of Good Eats while I waited for them to cool, and thanks to Alton, I really wanted wontons. 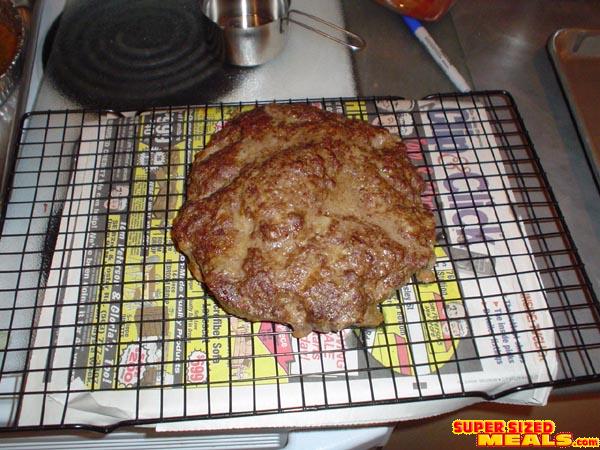 Like any cake, it needed to be leveled. I wasn't too worried about accuracy here, but I carved off a nice level slice from each layer. They steamed up when I leveled them, so I ate a quick lunch of meatloaf scraps while they cooled down some more. Needed a little salt, but my meatloaf is still very tasty. This time Alton taught me about vinegar. 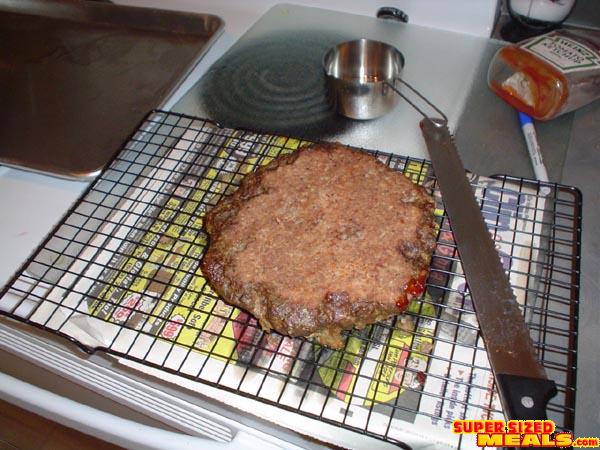 I stacked the layers and cut off the edges, to get some semblance of roundness. More scraps for dinner, I foresee. Again, I'm not really worried about making it perfect, because I can buy a lot of forgiveness with icing. I mean potatoes. (pardon me, I've got to go check on my green tea melon sorbet) 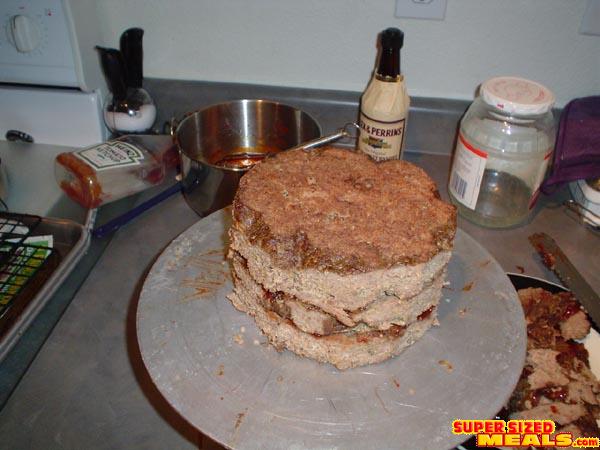 (back. It's not ready yet, but my raspberry ginger sorbet is hardened and it is delicious and I'm eating some.) So many scraps for dinner! mmmmm.

I am going to stack them on my prettiest paper round. Hee hee hee.

I whipped up a little more glaze to put between the layers. For glaze, I use Worcestershire sauce (pronounce the city woo-ste-sher. or wor-stur-sher, but the sauce is pronounced "worsher". Don't be wrong. You don't pronounce the 'ce', like you don't call Gloucester 'glao-che-ster' ACK BRAIN FREEZE DAMN YOU, GINGER SORBET! ok. Yeah. say it right. the end.), brown sugar, and ketchup. This is the only time I ever eat ketchup on purpose, because ketchup is vinegary, salty tomato blood and it is gross. True culinary fact. I use 1 tsp of wooshereshtir sauce, 1/4 c of brown sugar, and 1 c of ketchup, roughly. It's like my meatloaf. I don't usually make it the same way twice. I generally brush it on while it bakes, so the sugar caramelizes to deliciousness, but I am just using the raw deal here. 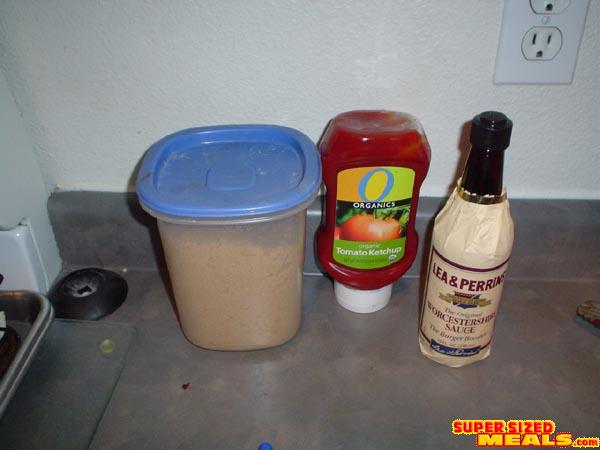 And now I spread it between the layers. The weight of the next layer is going to push on it, so I don't spread the glaze all the way to the edges. I'm being extra careful here, since I don't want the ketchup bleeding into the mashed potatoes when I spread them on. When I fill a cake with the same frosting that's going on the outside, I'm not so careful about it, but in cases like this, I don't want to contaminate the outer appearance at all. 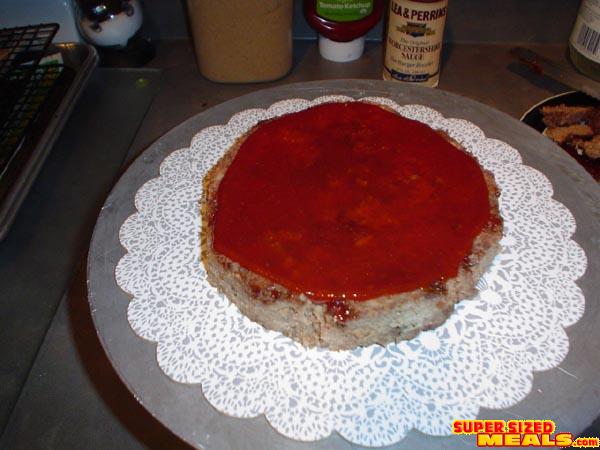 And now the frosting! Yeah, I'm cheating and using potato flakes - but for a specific reason. I like my real mashed potatoes with the skin in and lumpy as hell, so you can tell that it used to be a potato, but consistency is key here. I'm using potato flakes for smoothness and uniformity that I can't really get with real potatoes without killing my whip attachment. Yes, I *have* heard of a potato ricer, but I don't have one. And the ingredients for this alone cost me $40, so I wasn't about to invest some money on a ricer that I'm only going to use for this. And this is just a test cake anyway. Nyah. Yes. I'm cheating. And lazy. MMmmm potato flakes. 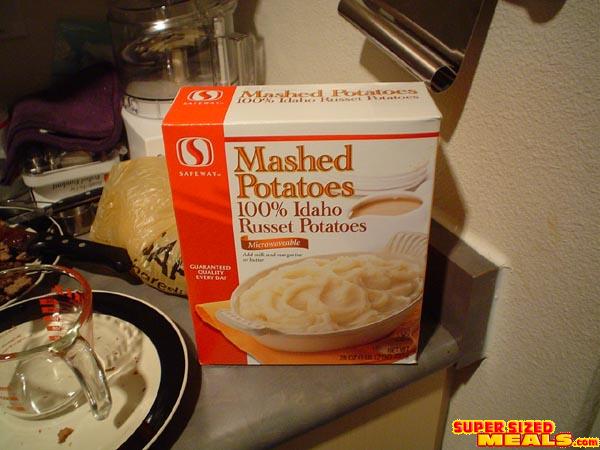 Is it buttercream? Is it mashed potatoes? hm. Hard to tell! And THAT, my friends, is the whole very point. 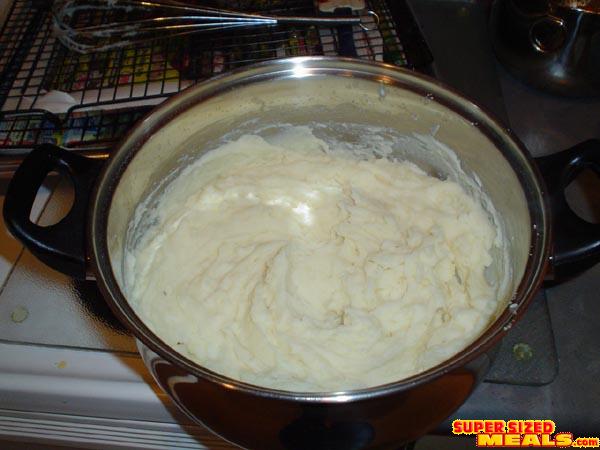 And now for the crumb coat! A very thin layer of potatoes is applied to give the cake shape, and to seal in the meaty crumbs and glaze that escaped. If this were a cake, I'd have frozen it for a little while before doing the actual frosting.. 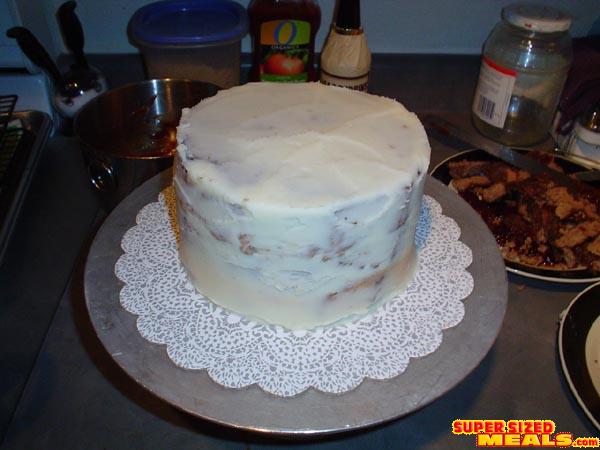 ..But it's not a real cake! HA-HA! So I'm plowing ahead and smothering it with potatoey goodness. It's at about this stage I started giggling at how well my plan was working. Holy hell, this looked like a cake. A real, proper cake! I am a GENIUS! 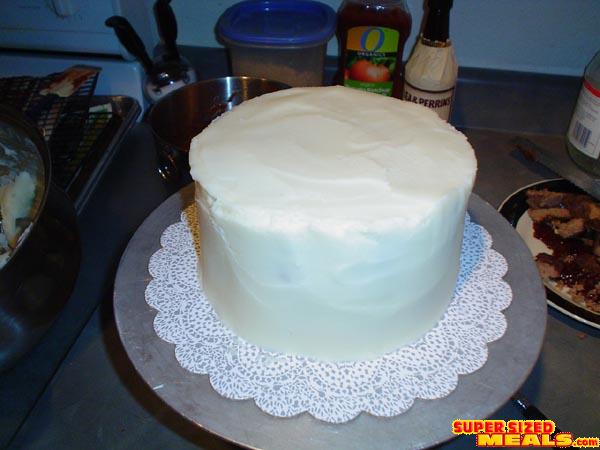 And now for the delicate touches. A spirally border with accents of glaze and a T-bone on top. I've never drawn a T-bone steak before. It didn't come out too bad, though there is a definite uterusy quality to it. And the brilliant part of this, is that mashed potatoes can be colored (anyone who's ever seen the movie Pan will testify). So I could have decorated this just like any other cake in the world. But the whole point of it is to be a Manly Man Cake, and hence the steak. Next time, I'll decorate it like a proper cake. You can pipe the mashed potatoes as easily as frosting. I also considered cutting some crispy bacon to be 'candles'. 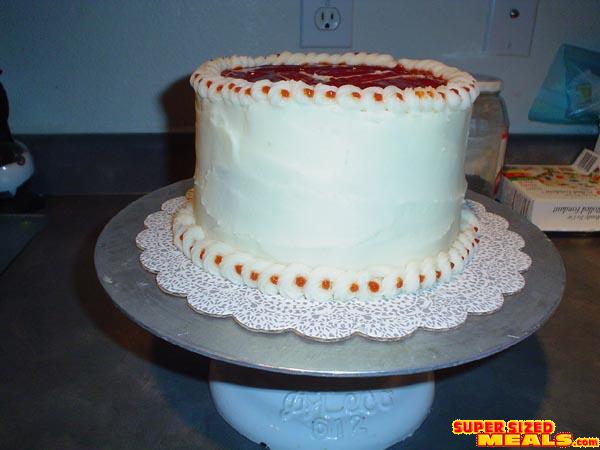 It tastes delicious. I chilled it, sliced it, then served it warmed up from the microwave. Cold meatloaf only belongs in sandwiches, not meat cake. It came out as well as I hoped, and it's received far more attention than I ever thought it would. Holy cats, a lot of you have seen this! I've received a ton of email about it, and so far the worst people have had to say was 'ewww meatloaf'. I shrug at thee! Meatloaf - when done properly - is delicious! Unless you are not a meatatarian, in which case it maybe tastes like murder, but for us hardcore meatatarians, murder tastes like meat! And meat is delicious!

And now I'm going to go watch what Alton has to say about spices, while you look at my meatcake some more. Bon apetit!

Like it? Tell me so. b3tard @ velcrohead . com And if you're really bored, you can look at my main site.


Facebook comments
Meat Cake! | 10 comments | Create New Account
The following comments are owned by whomever posted them. This site is not responsible for what they say.
Meat Cake!
Authored by: Anonymous on Saturday, August 05 2006 @ 09:43 pm UTC
that's funny.

If i ever get married i want meat cake

Animals are not yours to eat or make 'cakes' out of.

:-) Seriously though. I love vegans, but you're not going to change anybody's mind round these parts.