Booster Juice recently set the world record for the largest smoothie ever created. It was a 195 gallon smoothie in a giant cup. I especially like the plumbers pipe they used as a straw (complete with plumber writing on the side, haha)

KITCHENER, ONTARIO - After 7 blenders, 3.5 hours of blending and over 195 gallons of smoothie, a Booster Juice store in Kitchener, Canada broke the current record for the World's Largest Smoothie. To break this record Booster Juice had to surpass the previous record of 333 litres or 88 gallons of delicious smoothie. City firefighters were on site to help in the attempt to enter the Guinness World Records by making the world's largest smoothie. Best of all, Booster Juice raised $1,000 for the Canadian Cancer Society by selling the world's largest smoothie in 24 oz cups after the record breaking event. 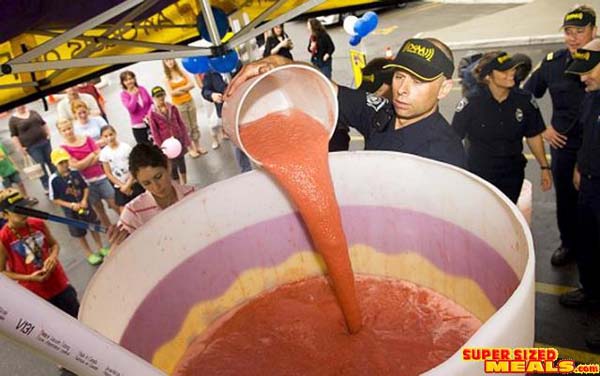 "As always we are excited to have set yet another benchmark in the Juice and Smoothie Bar industry and support such a great charitable organization," states Dale Wishewan, Booster Juice Co Founder and President of Booster Juice Canada. The event took place in the Sunrise Shopping Centre in Kitchener, Ontario.


Facebook comments
Booster Juice makes the World's Largest Smoothie | 0 comments | Create New Account
The following comments are owned by whomever posted them. This site is not responsible for what they say.