Another entry into the Big Burger Wars. This one is the 8lb "Big Kahuna Burger". Just like in Pulp Fiction, this IS a tasty burger! This 8lb burger has 4lbs of Hamburger meat, half pound of cheese, a whole tomato, a whole onion, a half a head of lettuce, 30 slices of pickle and served on a sixteen inch custom made bun. The Challenge: Eat this mountain of burgery goodness in 3hrs, and you get the burger for free. No one has eaten the whole thing yet, and if you're the first, you'll get $100. Best part is that the burger only costs you $25 if you don't eat it all. Not bad!

The Big Kahuna Burger
QUESTION : What do you get when you start with 4 LBS of Hamburger and grill it for as long as it takes....(about 35 Minutes)! 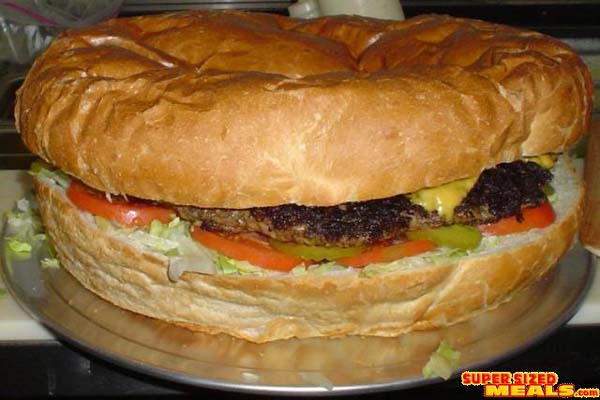 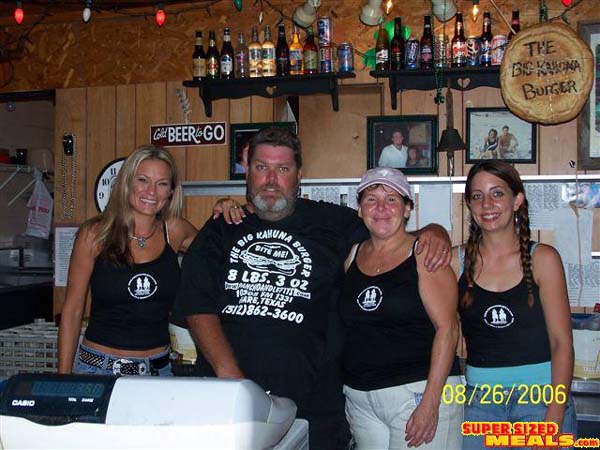 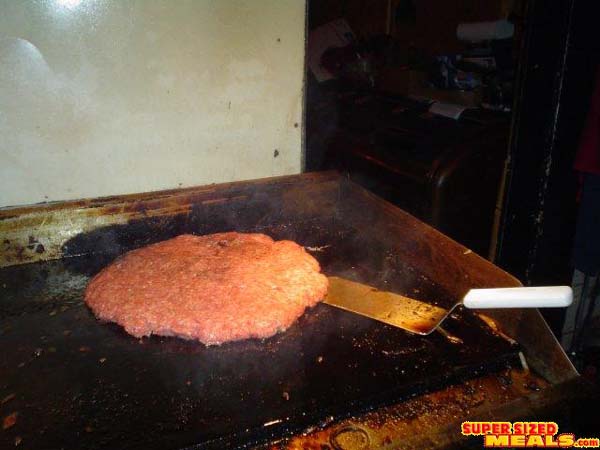 Now add a Half Pound of Cheese , A Whole Tomato , A whole Onion ,A Half a Head of Lettuce , 30 Slices of Pickle and serve it on a Sixteen inch custom made Bun 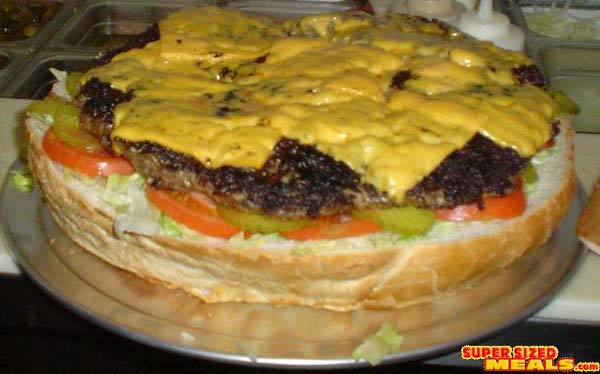 The Answer is : The Big Kahuna Burger , and were throwing down the Challenge! If you or someone you know thinks you can eat it, you have Three hours to consume it (Completely) if you eat the whole thing its FREE!!!, Be the First one to eat the whole thing and we 'll give you $100. The big Kahuna Burger is also available for anyone who wants one the cost is only $25.00 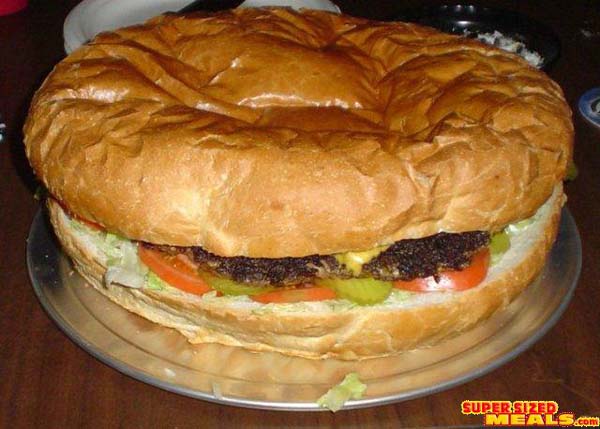 Here is Michael Shaw on his attempt Wednesday March 29th 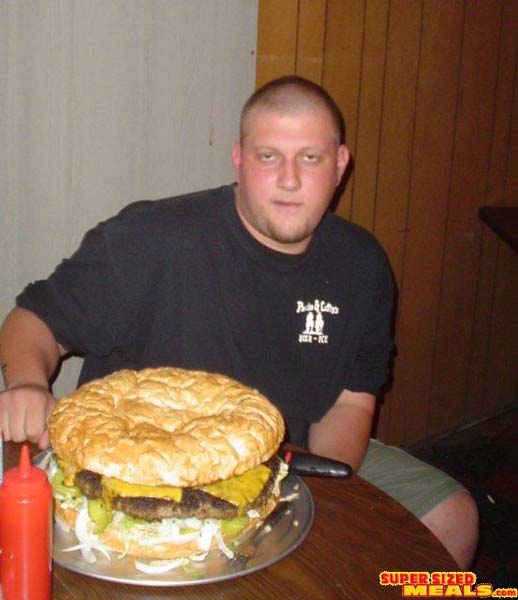 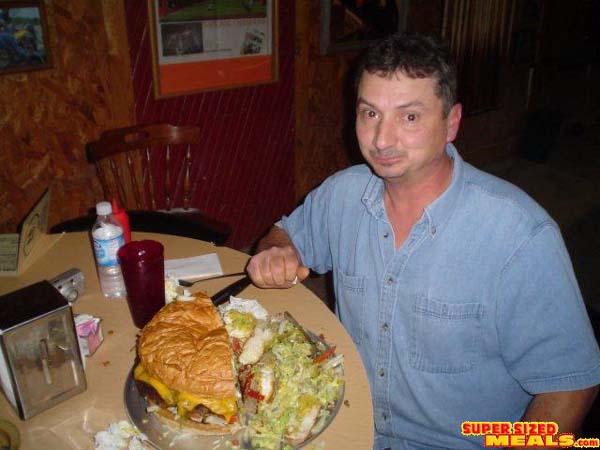 And The Statesman did up a great story on the Burger Challenge too!

The 8-pound burger challenge
A sleepy Williamson County town is home to the Big Kahuna.

HARE — Although his jaw hurt from chewing, Chad Coffman bit off another wad of cheeseburger. He willed himself to keep eating.

Did Chad Coffman bite off more than he could chew? Wes Coffman watches his son try to conquer the Big Kahuna Burger on a recent Saturday night at Pancho and Lefty's in Williamson County. 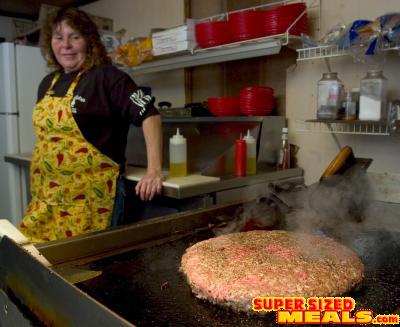 The 4-pound beef patty cooks for about 35 minutes. Then, atop a half pound of sliced cheese, Linda O'Donoghue will add a head of lettuce, a few handfuls of onions, about 30 pickles and plenty of tomatoes.

Before him sat a $25 burger that's wider than the average bedroom television set. The first person to eat the 8-pound Big Kahuna Burger in three hours earns $100 (a prize that would later be raised to $500).

A handful of big eaters have traveled to Pancho and Lefty's in northeast Williamson County to try, including one who held a world record in tamale eating. All have failed.

Owner Mike O'Donoghue snapped a crisp Ben Franklin at Coffman, but the gesture was all show. Coffman comes "well-credentialed," O'Donoghue conceded, but there was no way he'd finish. "Did you see the look on his face when we brought it out?"

The meat alone weighs 4 pounds. O'Donoghue won't allow anyone younger than 18 to try, and those who do must sign a waiver. Customers who want a Big Kahuna must give 24 hours' notice so the bun can defrost.

An hour before Coffman arrived, O'Donoghue molded raw ground beef into a mound the size of a human head and then used his fists to mash it into a patty 1 1/2 inches thick. It took 35 minutes to fully cook.

On top of a half-pound of sliced cheese, O'Donoghue's wife, Linda, added about a head of iceberg lettuce, a couple of handfuls of onions, 30 pickles and enough tomatoes that Coffman would taste one in every bite.

But the bun is what gets 'em. H-E-B makes it special from three French bread loaves.

The last guy who tried the Pancho and Lefty's challenge managed to eat all the meat. Then the bun stuffed him.

This is no ordinary burger. And Coffman, 29, is no ordinary eater. The 72-ounce slab of beef that an Amarillo steakhouse challenges customers to eat? Coffman's finished it. Not within an hour, as required to get his photo on the wall, but he did finish. Then he helped his friend with about 20 ounces of his steak.

He's also been known to conquer several steaks (plus fixings) at Sirloin Stockade's buffet and an entire large Domino's pizza with full orders of wings and Cinna Stix.

Still, only about 25 people in the country could finish an 8-pound burger, said Arnie Chapman, head of the Association of Independent Competitive Eaters, based in Long Island, N.Y.

Denny's Beer Barrel Pub in Pennsylvania challenges belt-busters to eat an 11-pound burger in three hours. Only one person has: a 19-year-old female college student, so unlikely a contestant that some grumblers in the competitive eating world still don't believe it.

Coffman isn't an especially big guy, although his 200 pounds and 6-foot-1-inch frame served him well as a defensive end in high school. When Coffman's girlfriend was pregnant, he still ate more.

The night before his attempt, the Taylor resident bragged over a few beers that he'd order some jalapeño poppers and cheese sticks along with the big burger. Now, he knew that was a mistake. He'd learn later that all those beers were, too.

Coffman cut the burger into quarters while everyone watched. He smashed the bun down so it'd fit in his mouth. The first quarter was gone in 12 minutes.

"I know I'm feeling it," he said and pushed himself away from the burger. His stomach hurt. And he needed another Bud Lite.

He sat back down with 2 1/2 hours and three burger-quarters remaining.

After another bite, "I gotta slow down." He switched to water. Onlookers were beginning to lose interest.

A customer walked by and laughed.

"I tell ya, that doesn't help," Coffman said, his previous confidence gone.

Most people who've tried the Big Kahuna finish at least half. Coffman reckoned he'd match that and then some.

Linda O'Donoghue has heard it before.

"They all talk big," she said.

After only 2 pounds of burger, Coffman said he was tired of eating.

It could've been his empty stomach. He'd had only two fajita tacos all day, not strategically, but because earlier in the day he hadn't packed snacks before he went hunting. Or it could've been the beers the night before.

He hadn't touched the burger in 30 minutes. At this point, he wasn't even looking at it.

"Boy, this is the championship," his dad said, trying to rally him.

"We lost them, too," Coffman replied, referring to his high school football days.

Besides, burgers aren't even his favorite. If it'd been steak, or pickles with chocolate milk, he could've done it, no problem. His talent, he learned, can't be forced.

His mom joked that Coffman's never been good at doing anything he was told to do.

With that, Coffman waved a white napkin at the 6 pounds of burger left on the platter.

Up to the challenge?

Think you can handle the burger? Go to www.panchoandleftys.com for directions to the restaurant. The owners recently upped the reward for finishing the burger within three hours from $100 to $500. If you can do that, the burger is free.


Facebook comments
The 8-pound burger challenge, Hare, TX | 0 comments | Create New Account
The following comments are owned by whomever posted them. This site is not responsible for what they say.