Following on from Part 1 of "Gary Washinsky and the Yummy Village Sushi Challenge", here is the second and final part to this fine eating challenge. When we last left our sushi samurai, he was close to finishing a record 53 pieces of Yummy Village Sushi, but he hit the wall. His mind and body would take no more, could take no more, the challenge was almost all over.... that was until he got his second wind! True champions never give up.... Will Gary become the latest legend, or latest victim? 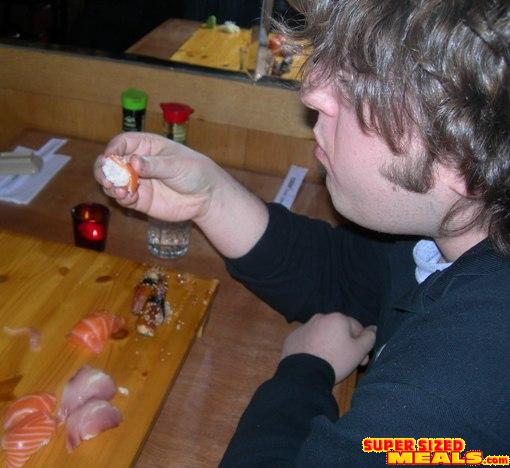 And that is precisely what Nigiri did. He willed it. His eyes, just seconds before glazed over and drooping nearly shut, lit up. His posture improved. His upper lip literally stiffened. And he began to eat once again. 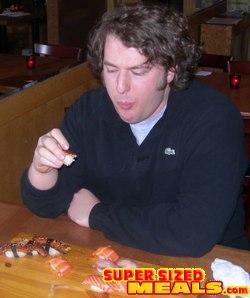 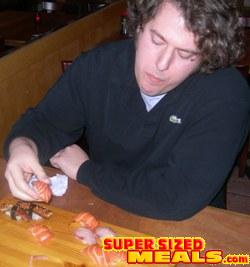 “Did I blow it?” The Big Washinsky mumbled as he bit off half a yellow tail. I studied my cell phone’s stop watch. It had been more than a minute. Jack counted the pieces remaining on the plate. It was still possible to break the record. Because he started out so strong, because he downed about 30 pieces in the first seven or eight minutes alone, Nigiri still had an outside shot.

“No, you can still do it,” Jack told him as he rubbed his shoulders like a prize fighter between rounds. And so Nigiri ate. And ate. And ate. He’d hit his brick wall, and he’d smashed through it. True, he’d come out slower on the other side, but he was still downing pieces, one after the other. No time for chop sticks. No room for soy sauce. Nigiri was running on pure will power.

Meanwhile, behind the scenes, a problem arose. The alarm clock that George the sushi chef and the waitress brought out was running fast. Compared with the stopwatch on my cell phone, it was a good two minutes off. This could pose a problem. Do we contest the clock during the heat of competition? That might break Nigiri’s concentration. And even if we did challenge the false clock, we could end up like the American basketball team of the 1972 Olympics (not to compare Yummy Village to the Evil Empire).

Jack made the decision: don’t let our champ know. Just tell him to keep eating and have him beat the official clock. 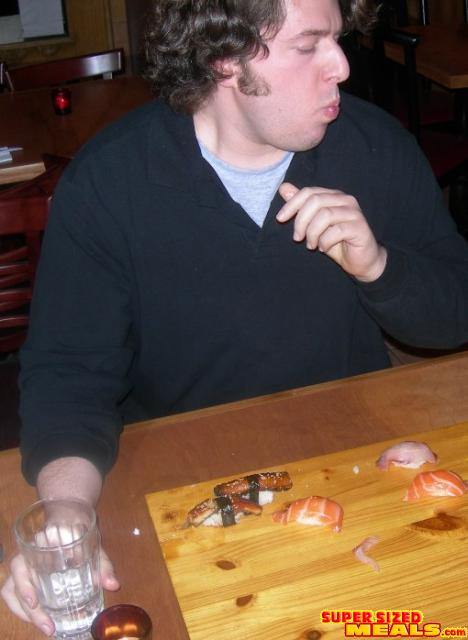 The water, which was just a luxury at the start, became a necessity between each bite. The remaining pieces, which ranged from average to slightly larger than average, looked gigantic even to me. And then came the final thirty seconds:

With no time left on the clock (yet just over 2 minutes on my clock) Nigiri did it. He swallowed the last piece as the timer hit the buzzer. Pandemonium broke out at Yummy Village.

But The Big Washinsky is not a professional. Yummy Village, though it should be, is not on the competitive eating circuit. What Nigiri did that night was something no one could ever take away from him, even if his record falls. Takeru, a Japanese man, came from Japan to eat a record amount of the ultimate American food- hot dogs- in Nigiri’s neigborhood. And now Nigiri, a Brooklynite, comes to Manhattan to eat a record amount of the ultimate Japanese food. The irony should not be lost.

Nigiri faced a Wall of Fame full of dozens of challengers, some losers, some champions, and he defeated each and every one of them by sheer force of will. 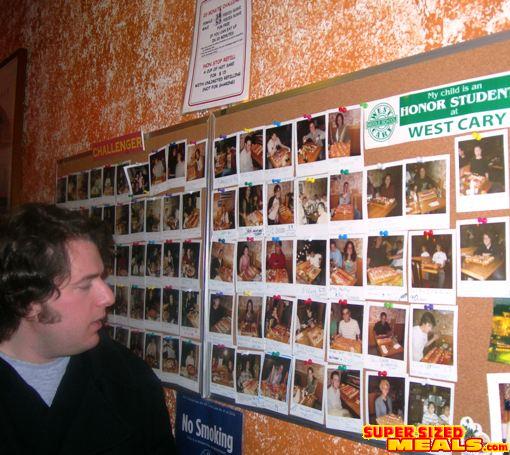 VIDEO OF THE WALL OF FAME

No, he did not come out of it unfazed. After achieving his sushi immortality, he stumbled out onto MacDougal Street and tried to throw up (I told you I refuse to sugar-coat what we’re really dealing with here). But he couldn’t. It was as though he stomach was saying to him, “NO! We’ve come this far, we won’t lose our honor now.” When he returned from the frigid lower Manhattan elements, he couldn’t get warm for ten minutes. Clearly, all of Nigiri’s blood was in his belly.

When he came back inside for the ceremonial pinning up of the Polaroid, he was still in extraordinary pain.

VIDEO OF THE PIN UP
But even after all that, Nigiri abides. 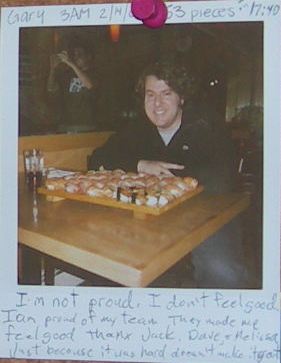 Nigiri abides. I don’t know about you, but I take comfort in that. It’s good knowin’ he’s out there, Nigiri, takin’ her easy for all us sinners.


Facebook comments
Gary Washinsky and the Yummy Village Sushi Challenge Part 2 | 0 comments | Create New Account
The following comments are owned by whomever posted them. This site is not responsible for what they say.