Expensive enough to feed most people for a week, this £100 meal contains only the most exclusive and expensive ingredients. With lavish shavings of white truffles - the most expensive type in the world, best not to follow this one down with a coke and chips...

It is the ultimate lunchtime snack using the most sought-after ingredients from across the Continent. But at £100 a time it costs more than dinner for one in some of the finest restaurants around the world. 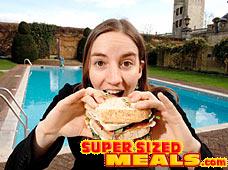 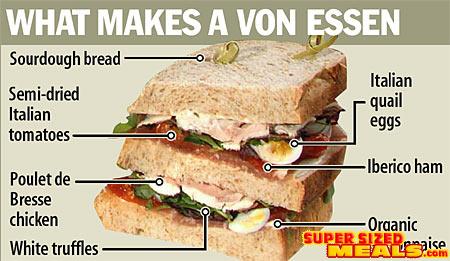 What goes into a Von Essen Platinum club sandwich?

It is on the menu at Cliveden, Berkshire, the country house hotel made famous by the Profumo scandal - and it weighs in at more than 1lb.

The chicken is poulet de Bresse, described by the French as the 'fourth gastronomic wonder of the world'. In the 16th Century, Henry IV of France demanded the inclusion of the corn-fed variety on the court menu.

Then there are layers of Iberico ham, which comes from the prized black-footed pig in Italy and has been air-cured for two-and-a-half years, and exotic hard-boiled quails' eggs are imported from northern Italy.

But what really sets the sandwich apart are the lavish shavings of white truffles - the most expensive type in the world. At £1,250 a pound, the truffles alone in each sandwich cost £25.

The final touches are semi-dried Italian tomatoes, mayonnaise and some seasonal salad. It is all held together in three layers of sourdough bread, made to a classic French recipe and fermented for 24 hours. Even then, only the middle of each loaf is used and the rest is thrown away.

Carlos Martinez, head chef at Cliveden, said: "We have made six sandwiches so far and the feedback has been very positive. It is a very good sandwich. We have used the top quality of every ingredient."

The most striking aspect of the seventh Platinum Club - served to me in the line of duty for The Mail on Sunday - was its size. It was, frankly, intimidating. Even to pick up half required two hands.

I began by nibbling tentatively at the edges. But to enjoy it properly - taking in all the flavours at once - any reserve and decorum must be thrown to the wind.

The chicken was wonderfully moist and delicious, and the ham was superb. The earthy taste of the truffles was intense. But the strong flavours were offset by the sweetness of the tomatoes and the lightness of the quails' eggs.

At 1,182 calories, with 1.8oz of fat, it may not be the healthiest lunch option. And the discarded crusts I struggled to finish would alone have been worth £10 if measured by weight.

Ireland's most expensive sandwich, at 216 euros(£146), was made by Dublin restaurateur Johnny Cooke last year.


Facebook comments
The £100 sandwich, Cliveden, Berkshire, UK | 0 comments | Create New Account
The following comments are owned by whomever posted them. This site is not responsible for what they say.