Shizuoka Meat Producers of Shizuoka, Japan and the All-Japan Bread Association had a mission. To create the World's Longest Hot Dog! Armed with a 50m conveyor, the dough was moved along the conveyor through the oven so it would be baked in one continuous section. The Hot Dog itself was pre-made and stored in a large plastic barrel prior to the event. Once the bun was baked, the hot dog was placed, and voila! The World's Longest Hot Dog!

On August 4, 2006 a hot dog measuring 60m in a bun measuring 60.3m was made by the Shizuoka Meat Producers of Shizuoka, Japan and the All-Japan Bread Association to obtain the world record. International media was onhand, and supporting documents have been verified by Guinness. The hot dog was made as the central part of a media event surrounding the 50th anniversary of the All-Japan Bread Association. 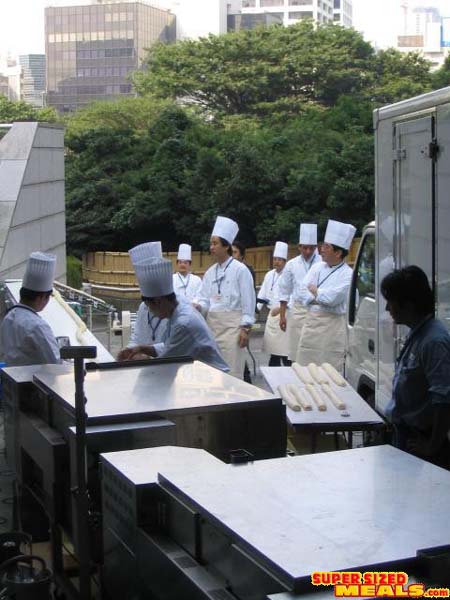 The hot dog bun was assembled from tubes of dough, pressed together before entering the dual jet ovens on a conveyor belt. The method of connection created weak spots in the bun, but no problems arose from this. 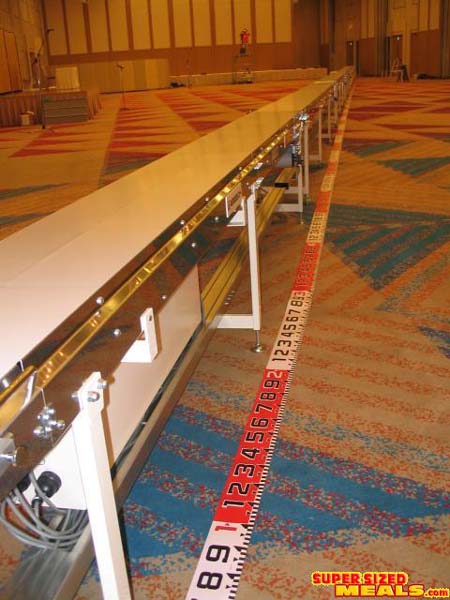 To allow smooth transport of the wiener and bun through the ovens, a 50m Bando conveyor was set up in the ballroom at the Akasaka Prince Hotel 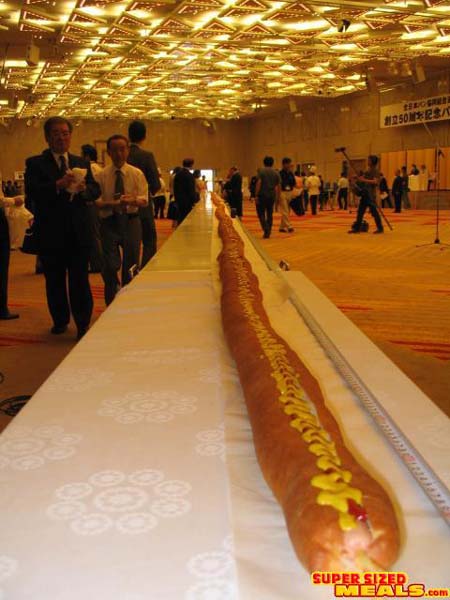 Technical challenges
Creating a long hot dog is not much of a feat, as evidenced by the 1,996 foot hot dog created for the 1996 Olympics. This is because the hot dog is structurally quite sound, and remarkably flexible. In the August 2006 record breaking attempt, the hot dog was manufactured by Shizuoka Meat Producers, and wound into a large plastic barrel which was easily transported inside a delivery van.

The limiting factor for breaking this type of record is the bun. The bun, in order to remain in one continuous unit, needs to be baked in its final form. For the All-Japan Bread Association, this meant the connection of the longest conveyor belt possible with the equipment available to them. The dough was assembled in half-meter sections, then pressed together to create a longer tube of dough, which was then fed through the ovens via conveyor, and carried away from the ovens by another conveyor. The key was to make sure that the already-cooked bun did not move at a faster rate than the bun behind it, as this would cause the bun to pull apart. The wiener was fed through the oven at the same time to cook it. There also needed to be space outside the oven to store the bun and wiener until the entire bun had been baked. To allow for enough room for this to happen, the ovens and prep area were set up outside the ballroom of the Akasaka Prince Hotel on the loading dock, and the bun and wiener were fed into the ballroom along the conveyor as they exited the oven.

Upon completion, the bun was sliced down the middle by bakers, and spectators were asked to don rubber gloves and first lift the wiener in one piece for photos, and then insert it into the bun. After being topped with mustard and ketchup, the completed hot dog was lifted by the assembled spectators 30cm off the conveyor for photos. Finally, the official measurement was completed, and the wiener was 60m in length, with the bun coming in at 60.3m in length. After photos and video of the official measurement were completed, the hot dog was cut into sections and the assembled spectators each had a piece. However, this only used about 8m of the hot dog. Presumably, the rest was used later that evening at the All-Japan Bread Association's 50th Anniversary Celebrations.


Facebook comments
The World's Longest Hot Dog, Akasaka, Tokyo, Japan | 0 comments | Create New Account
The following comments are owned by whomever posted them. This site is not responsible for what they say.