PHOENIX — A California man smashed the world record for hot dog eating at a contest Saturday, gobbling up more than 59 franks in 12 minutes. Joe Chestnut, 22, of San Jose, shattered the record held by Takeru Kobayashi of Japan by downing 59 1/2 "HBDs" — hot dogs and buns — during the Southwest Regional Hot Dog Eating Championship at the Arizona Mills Mall in suburban Tempe. 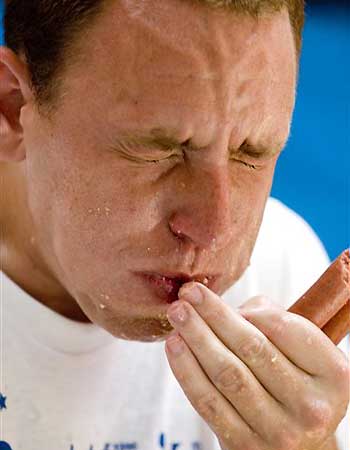 "He's unbelievable — he just keeps on going," said Ryan Nerz, who works for Major League Eating, which he describes as "a world governing board for all stomach-centric sports."

"These guys' numbers have just been going up at a tremendous clip," Nerz said. "I always thought there was a limit — a limit to the human stomach and a limit to human willpower — but I guess not."

Chestnut won a free trip to New York, a year's supply of hot dogs and a $250 gift card to the mall.