The Fool's Gold Loaf. An Elvis Favorite!
Contributed by: Billy

Elvis was famous for his outrageous appetite, and this particular meal was no exception. It's called, "The Fool's Loaf", probably because only a fool wanting to die would eat it! It's a full loaf of bread packed with jam, peanut butter and bacon. Love me tender!

So a while back my roommate was telling me about this sandwich he heard about that Elvis loved. Apparently it's made in a restaurant in Denver, Colorado, and it's called the Fools Gold Loaf - the sandwich, not the restaurant. The story goes that the actual sandwich was a loaf of bread, an entire jar of peanut butter, and entire jar of grape jelly, and a pound of bacon. Also, the bread is toasted. And it cost $50. Supposedly Elvis flew himself and his friends to Denver at 3 in the morning just to have this sandwich. Apparently Elvis could eat the whole thing by himself. Now, I don't know if any of this is true, but we decided some weeks back to try it out. So, tonight was the night. Consider this a proof of concept.

The bread burned because we were trying to do the math to see how many calories we would consuming and forget the bread was in the oven. It wasn't too bad, and I managed to scrape almost all of the char off. And though we didn't use a whole jar of peanut butter, we did use a generous amount. We did, in fact, use an entire jar of grape jelly. 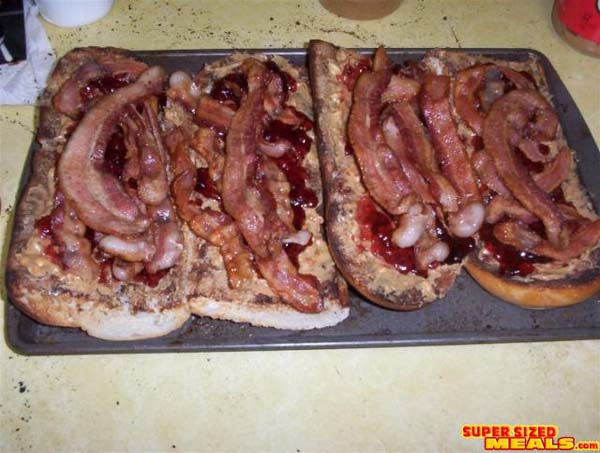 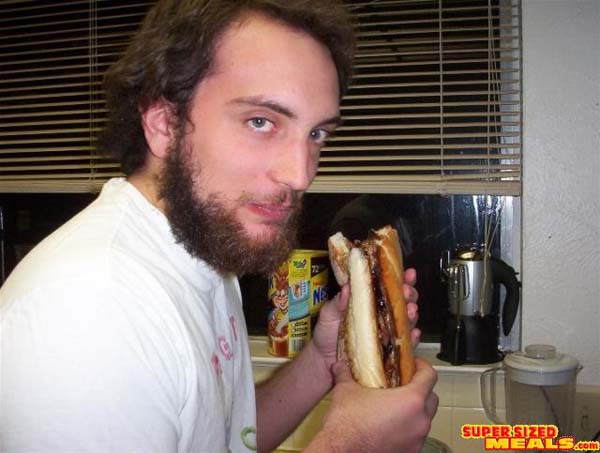 Fool's Gold Loaf is a sandwich made by a restaurant in Denver, Colorado called the Colorado Mine Company (often erroneously referred to as the Colorado Gold Mine Company). The sandwich consists of a single loaf of hollowed out, warmed bread, one jar of peanut butter, one jar of jelly, and a pound of bacon. The result is slathered with butter and then baked. The name of the sandwich is derived from its price of $49.95. In later years, it was priced closer to $100 for the sandwich and a bottle of Dom Perignon.

Elvis Presley and the Fool's Gold Loaf
On the night of February 1, 1976, Elvis Presley was at his home Graceland in Memphis, Tennessee entertaining Capt. Jerry Kennedy of the Denver Colorado police force, and Ron Pietrafeso of Colorado's Strike Force Against Crime. The three men began discussing the sandwich and Elvis decided he wanted one right then. The Mine Company was a five-star restaurant which was known for its rip-roaring parties and the 'place' to be seen at the time. Elvis had been to the restaurant before while in Denver. Kennedy and Pietrafeso were friends of the owners and hung out there often. So they were driven to the Memphis airport and boarded Elvis's private jet, the Lisa Marie, and flew the two hours to Denver. When they arrived in Denver at 1:40 AM the plane taxied to a special hangar where the passengers were greeted by the owner of the Colorado Mine Company, Buck Scott, and his wife Cindy who had brought 22 fresh Fool's Gold Loaves for the men. They spent three hours in the hangar eating the sandwiches, washing them down with Perrier and Champagne. Typical of Elvis's generosity, he invited the pilots of the plane, Milo High and Elwood Davis, to join them. When they were done, they flew back to Memphis without ever having left the airport.