Looks like News.com.au doesn't like the idea of "The Double Pounder", a McDonalds Quarter Pounder with 8 patties. They've recently reported on the phenomenon and likened it to "a heart attack waiting to happen". The article stemmed from a video we wrote about a few weeks ago of a 17yr old guy downing one of these McTowers, you can check out the video here... Haven't News.com.au heard the jingle though? We're lovin' it!!!

By Clair Weaver
August 12, 2007 01:00am
MONSTER-SIZED McDonald's hamburgers stuffed with up to eight meat patties and nine slices of cheese have been slammed as "a heart attack waiting to happen". Some of the fast-food chains sell super-sized Quarter Pounders, which contain about 220g of fat and 11,500kJ each, on request. The "double pounder" is the equivalent of more than three days' worth of fat for a grown man - or almost five Pizza Hut deep-pan Hawaiian pizzas or 45 Tim Tams. 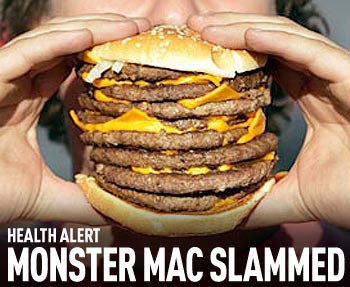 At about $18, it is not listed on the menu, nor under nutritional information.

It has developed a cult following as a challenge for teenagers, after a video was posted online of a 17-year-old boy ploughing his way through the burger at a McDonald's restaurant.

Rival chain Hungry Jacks is also allowing customers to order mega-burgers under its Have It Your Way ordering system.


Facebook comments
Double Pounder a McDonald's heart-stopper | 0 comments | Create New Account
The following comments are owned by whomever posted them. This site is not responsible for what they say.