Which came first, the Chicken or the Egg? I suspect if you're drunk enough to actually have one of these, you won't care what came first, only what might come up later. It's an alcoholic cocktail made from a cooked chicken wing and a raw egg. Cock a doodle spew!

Awesome name!! This is a redneck hangover cure from hell. But it works. A permutation of the classic prairie oyster shot with a spicy ass wing on top. Eat the wing first and them slam the drink. HOOO YA MUTHA!!! That's the shiznit!

Mix everything together except the egg. Then crack the egg on top. Add a pinch on salt and pepper. SLAM! 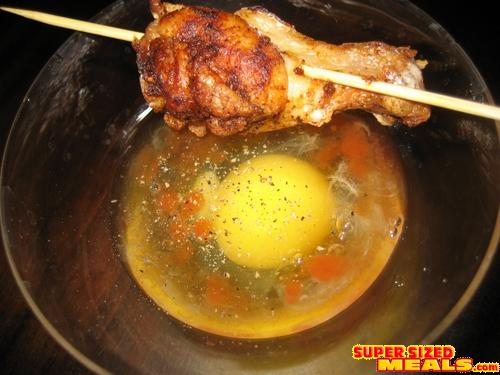 
Facebook comments
The Redneck Hangover Cure, Chicken and Egg Cocktail | 0 comments | Create New Account
The following comments are owned by whomever posted them. This site is not responsible for what they say.