Technically it's not a donut per se, but more of a donut sculpture. Still, it's pretty impressive. 90,000 donuts, half a tonne of pink icing, and 30kg of sprinkles from Donut King. Donut craving anyone?

IF Homer Simpson thought heaven was the episode where he was in hell with a never-ending supply of doughnuts, then Circular Quay this morning would have come a close second. To celebrate the release of The Simpsons Movie on dvd, the Simpsons family oversaw the construction of the world’s largest doughnut. 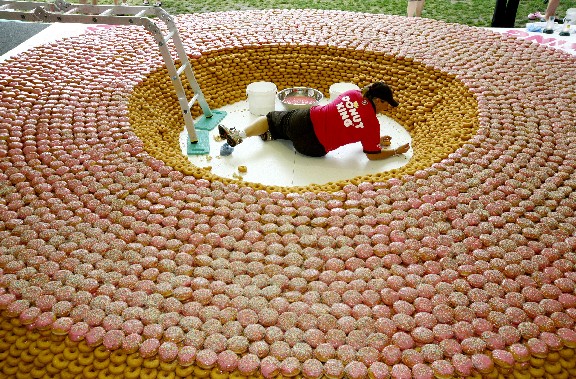 The giant doughnut measures six metres and weighs a whopping 3.5 tonnes, which is the equivalent of two rhinoceroses.

Once the giant doughnut’s media duties are complete, the doughnuts will be donated to Oz Harvest, a Sydney-based charity that collects excess food for organisations that feed disadvantaged men, women and children.


Facebook comments
The World's Largest Donut (sculpture) | 0 comments | Create New Account
The following comments are owned by whomever posted them. This site is not responsible for what they say.