$25,000 Sundae Restaurant Shut Down by Health Officials
Contributed by: Billy

You'd think somewhere that sells $25,000 Sundae's could control a roach and rat problem? Apparently not. A few weeks ago it was shut down until they got the problem under control. Don't fear though, they've since re-opened. Lucky, I had a fat wad of bills burning a hole through my pocket!

NEW YORK (Nov. 15) - A Manhattan restaurant that unveiled a record-breaking $25,000 dessert last week has been forced to shut its doors temporarily due to an infestation of mice and cockroaches. Serendipity 3 on the Upper East Side failed its second consecutive health inspection in a month on Wednesday night after health officials found a live mouse, mouse droppings in multiple places, flies and dozens of live cockroaches, the Heath Department said. 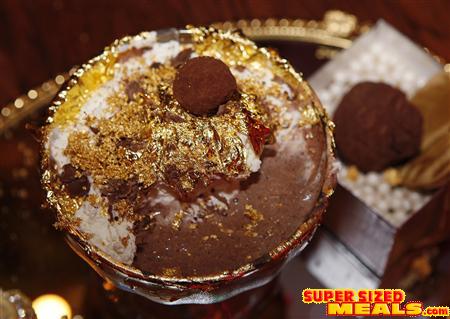 "We're rectifying it as quickly as we can," said owner Steven Bruce, adding the restaurant would then be allowed to reopen.

Serendipity 3 set a Guinness world record on November 7 for the most expensive dessert when it partnered with luxury jeweller Euphoria New York to create "Frrozen Haute Chocolate," a blend of 28 cocoas fused with 0.2 ounces of edible 23-karat gold.

It comes with an 18-karat gold bracelet with 1 carat of white diamonds at the base of the goblet. The sundae is topped with whipped cream covered with more gold and a side of La Madeline au Truffle from Knipschildt Chocolatier, which sells for $2,600 a pound.

The desert is a more decadent take on Serendipity's $8.50 "Frrrozen Hot Chocolate," which the talk show host Oprah Winfrey once endorsed by saying it made her want to "dance on the chandeliers." Bruce also has a $1,000 ice cream sundae on the menu called Golden Opulence.


Facebook comments
$25,000 Sundae Restaurant Shut Down by Health Officials | 0 comments | Create New Account
The following comments are owned by whomever posted them. This site is not responsible for what they say.