You can't eat stone, but you can eat Bacon! Bacon Henge, for the culinary historian...

Technically, a henge is actually an oval or circular earthwork, with a surrounding bank built up of the earth excavated from a ditch inside the bank. By this definition, Stonehenge is not truly a henge in any sense, as its ditch lies outside the bank.

There have been many theories as to the intended purpose of Stonehenge and other standing stones. The most likely seems to be, at least in part, that of seasonal calendar, as the sun aligns with particular stones at the solstices. This phenomenon, coupled with the mystery of the henges' origins, has made the henges into sites of pagan ritual in recent centuries, if not throughout their histories. Some of those ancient rites are rumored to have included ritual sacrifice.

Let Baconhenge be the site of your seasonal celebration! Let bacon stand in for the sacrificed Year King, French toast for the Grain Goddess, the eggs in the frittata for the Cosmic Egg, and the vegetables for the bountiful Earth on which we live.

You Will Also Need

Chef's Notes
Have the vegetables cleaned and cut up before you begin.

Directions
Place a baking rack on a baking sheet. (You may wish to line the baking sheet with aluminum foil, to make clean-up easier.) Select 10 or 12 (it must be an even number) French toast sticks, of fairly uniform size and rectangular shape. It makes no difference whether they are center- or crust-cuts. 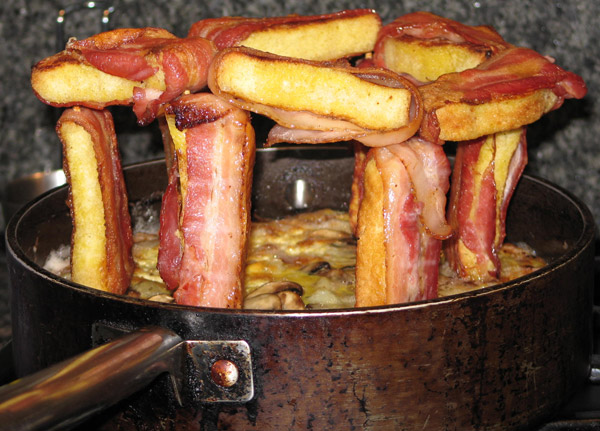 In the cast iron skillet, heat about two tablespoons of cooking oil over medium heat. Add the vegetables, and cook until the potatoes are about 3/4 of the way done, stirring occasionally. They should be soft on the outside, but somewhat firm on the inside, when pricked.

While the vegetables cook, break the eggs into the bowl, and beat lightly with the whisk. Add the water, salt, and pepper, and mix well.

Place the bacon-wrapped French toast sticks in the oven. Bake for 15 to 20 minutes, checking frequently, while you cook the frittata.

Stir the vegetables once more, add a little more oil to the skillet, then add the beaten eggs. Allow the frittata to cook until the bottom has set well, and the top looks slightly underdone, about 15 to 20 minutes.

When they are done, remove the bacon-wrapped French toast sticks from the oven, and set aside to rest a few minutes. Turn the oven up to Broil. Place the frittata in the oven, on a center-or-higher rack (or under the broiler) until the top begins to brown, about 2 to 5 minutes. Watch it carefully; it can overcook quickly. Remove the frittata from the oven.

Assembly:
Begin assembling the henge: Lay 2 skewered bacon-wrapped French toast sticks together on your work surface. Create a trilithon by spearing the ends of a non-skewered bacon-wrapped French toast stick lintel on just one skewer of each upright French Toast stick. If necessary, push the skewers through so that they are not visible at the top of the trilithon. Spear another lintel on the free skewer of one upright, then add another upright under the end of the new lintel.

Place your double trilithon upright on the frittata, an inch or two from the side, following the curve of the skillet. Poke the bottoms of the skewers down into the frittata. Have your assistant hold the trilithons in place while you continue adding uprights and lintels, until the circle is closed, and the ring of standing "stones" complete.

Serve:
Bring Baconhenge to the table, still in the skillet. Offer maple syrup on the side. 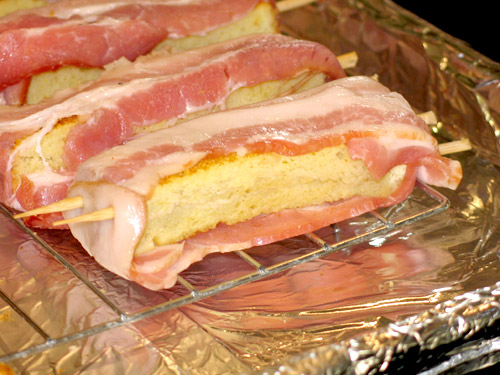 
Facebook comments
Bacon Henge | 0 comments | Create New Account
The following comments are owned by whomever posted them. This site is not responsible for what they say.