[via A Hamburger Today] Burgerzilla! Even the name sounds epic. Apparently there's a giant food-van-kitchen-thing-on-wheels on the corner of Old Seward Highway and 56th Avenue, Anchorage that serves this mammoth burger. What is it you may ask? Well for $20.95 you get a 4lb 5oz burger with double cheese. (3lbs of meat!) Hmm I wonder if they'd show up to a ball game or something... now that would be something! Get in quick though, she's closing down for winter at the end of September!

Massive sandwich will destroy any amount of hunger. I bought a hamburger at Sunshine Express the other day. I was still eating on it at lunch the next day. The same one. And it wasn't even the joint's biggest burger. 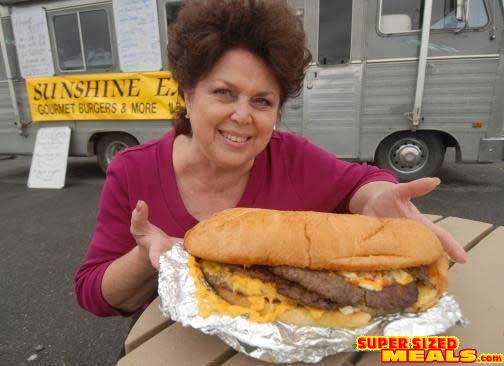 Sunshine Express is a sparkling, tricked-out kitchen on wheels currently parked at Old Seward Highway and 56th Avenue, between Dowling and International Airport roads. But the aesthetics of the establishment aren't what made my head snap when I drove by. It was the sign advertising 3-pound gourmet burgers.

Three pounds? That's like a whole chub of ground round.

Fortunately I didn't have to eat it, settling instead for the mere 1-pound version.

Sunshine Express's basic one-patty Gourmet Burger ($9.95) is built around a large disc of meat on a sliced French loaf about the size and shape of a deflated football. It comes with lettuce, tomato and onion and, for 50 cents each, you can add toppings including cheese slices, blue cheese, bacon, mushrooms, green or red chiles and pineapple. Two- and 3-pound burgers ($15.95 and $19.95) are the same array but with more patties. The 3-pounder looks like an inflated football.

The advertised weight refers to mass before cooking. My grilled patty weighed in at 13.5 ounces; the whole sandwich -- if that's the right word for something bigger than my head -- was about 2.5 pounds. I took it home and chopped it into eighths for the family, who were all satisfied with the flavor.

"It's a lot better than fast-food burgers," said son Ben. "It's not as good as Long Branch Saloon's, but they make up for it in quantity."

For those disinclined to tackle half a cow on a bun, the menu also features deli sandwiches, beef or chicken burritos ("fresh salsa daily"), hot dogs, a simple quarter-pound Sunshine Burger ($4) and homemade soups. I had a satisfying creamy potato and celery soup cup ($3) while waiting for the burgers to cook. We also tried the normal-size shredded chicken taco and gave it high marks for its smoky, roasted flavor.

There's a home-cooked touch on most items. Linda Merren, owner and chief cook -- well, the only cook at the moment -- doesn't pre-fry her burgers, which can take up to 15 minutes to do right. There's a little table with chairs next to the wagon in case you don't want to wait in your car.

She takes pride in her facility, a transmogrified motor home that her husband, Tom, customized to fit her height. "I'm 5 foot 3 inches," she said. "Some of the counters and stoves and stuff are so high for me to get on top of and look down at what I'm doing."

She also takes pride in not serving french fries. "I want to keep things healthy," she says. "A nice bowl of soup or a salad is better for you."

You will find chips and cookies. The early crowd can get coffee or a breakfast burrito.

But not for much longer. Merren plans to shut down before the end of September because the rig's water tanks might rupture in cold weather. So if you want bragging rights for having consumed what must be the biggest burger in Alaska -- or splitting it with a dozen friends -- act now.

When the Sunshine Express rolls out again in the spring, probably in March, it will be in a new location. "With our brand-new menu -- the FOUR-pound hamburger," she said with a laugh.

I think that was a joke.

Linda promised she'd let us know when and where. Stay tuned.

Tale of the scale


Facebook comments
Burgerzilla! Anchorage, AK, Alaska | 0 comments | Create New Account
The following comments are owned by whomever posted them. This site is not responsible for what they say.