Couple have Giant Hamburger instead of Wedding Cake
Contributed by: Billy

[via A Hamburger Today] Forget the usual tiered white wedding cake. This couple love burgers so much they decided to make a giant one and use it instead! Tom and Kerry Watts of Poringland, England, served a 19 kilogram (42 pound) cheeseburger at their wedding reception made by American restaurant min-chain, Zaks. Looks an awful lot like one of our Megaburgers!... Ah, how romantic...

While most bride and grooms traditionally cut a wedding cake on their special day, fast food fans Tom and Kerry Watts enjoyed a huge burger complete with all the trimmings. The mammoth 19kg (42lb) cheeseburger, which was nearly half a metre wide and weighed the equivalent of about 100 quarterpounders, was the highlight of the couple's wedding reception at Zaks at the Swan, in Poringland, after they got married at nearby All Saints Church yesterday 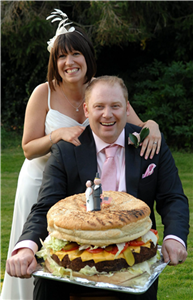 Mr Watts, a 36-year-old firefighter, said: “Not only did I get to marry the woman of my dreams but I also got to have the burger of my dreams in the same day.

“I could not believe the size of the burger. It was just incredible. Everything has just been amazing. It was the best day ever.

“We wanted to do something a bit different for our wedding day and make it a day to remember. The idea of a wedding burger started out as a bit of a joke at first but when the guys at Zaks said that they could do it, I was over the moon.

“We live in Poringland and we go to Zaks every other month. We love a burger so the reception was just awesome.

He said the idea for their reception at Zaks started when a waitress overheard them discussing their wedding plans at the diner in February, but the giant burger idea was only thought up last week when the Zaks team started creating their rather unusual wedding present for the couple.

It took butcher John Baxter, from Burgers Plus, in Norwich, a whole day to create and shape the giant beef patty, weighing 400oz when uncooked, from Zaks' secret recipe.

He said: “It was the biggest burger I have ever made. It looked like a big car wheel! It was two-and-a-half inches thick and I had to have a special stainless steel tin made for it.”

And yesterday the finished burger had to be cooked for three hours. Three chefs were needed to lift it out of the oven before it could be put into the specially made sesame seeded bun, from Merv's Hot Bread Kitchen, in Wymondham.

The bun weighed 5kg and staff had to cut it in half using a saw.

Then, to finish off the fast food masterpiece, it was garnished with 12 iceberg lettuces, 12 onions, 30 tomatoes, 48 slices of dill pickle, and 2kg of cheese, along with a litre of ketchup and a litre of mayonnaise.

The new Mrs Watts, a 36-year-old nurse, said: “We love burgers and thought it would be a bit of fun. It made the day even more special. We love chocolate too so we also had a chocolate cake.”

Before tucking into the giant wedding burger the 60 guests were also treated to a specially adapted Zaks menu that included a Tom and Kerry burger, an amalgamation of the couple's favourite burgers, surf and turf for Mr Watts and cheeseburger for Mrs Watts.

Zaks restaurant manager, Danielle Durrant, said: “Tom and Kerry are a superb couple and we were delighted when they asked to hold their reception here at Zaks.”

The couple met on a night out in Norwich and Mr Watts proposed to his new wife at Dunston Hall last Christmas, after they had been together for two years.


Facebook comments
Couple have Giant Hamburger instead of Wedding Cake | 0 comments | Create New Account
The following comments are owned by whomever posted them. This site is not responsible for what they say.