In these tumultuous economic times, one must be mindful of ones wallet, and just how much value one can gain from the local buffet. And that's exactly what Oliver Gettell did, reporting on just how far the humble dollar can stretch at these establishments. I could go one meal a day if it came to the crunch, could you?

Given the shaky economy and the mortgage mess, it would seem the American dream has lost a bit of its luster. But if there's any place that can calm recession woes, restore consumer confidence and promise good value, surely it's the Hometown Buffet. With its comfort-food menu and all-you-can-eat buffet, HTB would seem the perfect restaurant for lean times. The notion of an endless buffet is, after all, an apt metaphor for the American dream. It is a place of opportunity, a land of plenty, a multicultural melting pot where minestrone, enchiladas and kielbasa peacefully coexist under one roof.

To test this theory, I enlist the help of Metromix photo editor Shane Redsar, who once ate four and a half 60-cent chiliburgers. When it comes to eating, he is an expert at getting his money's worth. Driving up the 5, we discuss strategy. We've chosen not to fast (that's a rookie mistake). We will keep beverages to a minimum and avoid filler (grains, vegetables, etc.) in favor of big-ticket proteins such as steak and shrimp. Imagine the old food pyramid, but inverted.

We arrive, pay the cashier $11.99 each and survey the scene. The carving station is being replenished, so our protein-first game plan goes out the window. That's OK; buffet eating, like jazz (that other great American art), is all about improvisation. I make my first plate an international celebration: a hard-shell taco, spaghetti with meat sauce, orange chicken, rice pilaf, fried chicken and Salisbury steak (from Salisbury, presumably). The taco and orange chicken are reasonable facsimiles of their fast-food counterparts, and the fried chicken is a standout. It's hot, crispy and, as Shane says, "just greasy enough." The Salisbury steak, however, despite being a daily special, resembles wet newspaper. Shane's mac 'n' cheese also elicits a grimace; it's somehow both completely bland and too salty.

The plates that follow do not disappoint in their variety. We sample fried fish (pretty good), mashed potatoes with gravy (like Mom used to make), sausage calzone (labeled "new!"), fried clams ("What are these?" I ask an attendant), seafood salad ("interesting," Shane says ominously) and more. The other specials, rancher's select steak and a lemony baked fish, are among the highlights.

Somewhere between our third and fourth plates, our eyes glaze over and our combinations become increasingly incongruous; we discover, for example, that cherry Jell-O has no place on a plate with grilled beef. We eat dessert slowly, in silence. By this point, it is clear that we have hit a ceiling in our quest to stretch our dollars to the maximum. As with the credit crunch, our unchecked desire to acquire more has gotten us into a crisis.

As we leave the restaurant, it occurs to me that this is the dark side of the American dream. In the promised land, we are free to choose and to do what we want—but with that freedom comes great responsibility. Choose wisely. 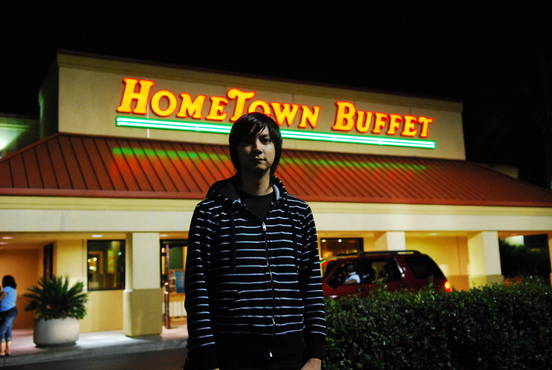 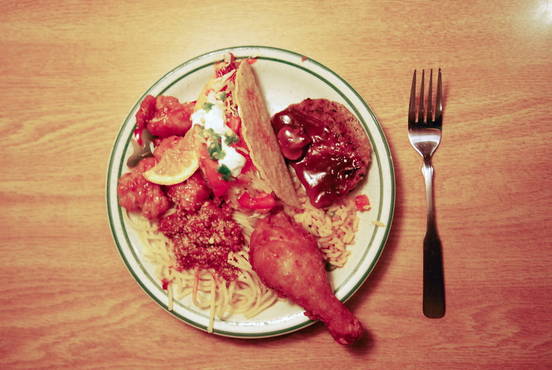 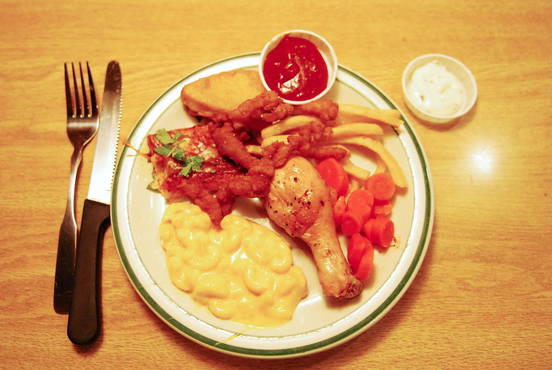 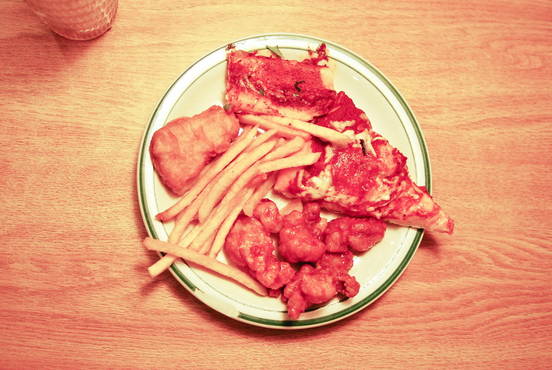 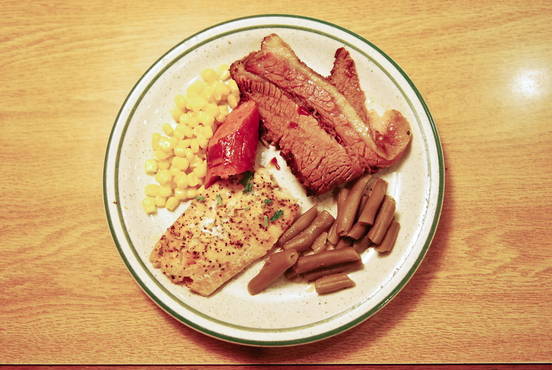 
Click here for more pics of their Hometown Buffet adventure!


Facebook comments
Economic eating at Hometown Buffet | 2 comments | Create New Account
The following comments are owned by whomever posted them. This site is not responsible for what they say.
Economic eating at Hometown Buffet
Authored by: Anonymous on Monday, November 17 2008 @ 02:32 pm UTC
I love that place, although the ones we go to here in Massachusetts are called "Old Country Buffet", same company, same food, although some are better than others..
[ Reply to This | # ]
Economic eating at Hometown Buffet
Authored by: Anonymous on Wednesday, November 26 2008 @ 03:30 pm UTC
To save a bit of money, find out what time they switch over from their lunch menu to their dinner menu. Arrive 15 minutes before dinner and you'll pay a couple bucks less.
[ Reply to This | # ]