Ah Thanksgiving, that time of the year where everyone gets together to celebrate a momentous occasion... and eat massive amounts of Turkey. Now we've all heard of the Turducken before, but the guys over at Bacon Today thought of a way to improve it.... guess.... that's right, just add Bacon! Just take a Turducken, and wrap that bird in bacon. Who said pigs can't fly?

Just in time for the winter season comes a recipe that is sure to bring bacon lovers some warm holiday cheer. Turbaconducken. That’s right — a chicken stuffed in duck stuffed in a turkey, all wrapped in bacon. Otherwise known as a bacon-wrapped turducken. Just how did we create this meaty madness? Read on. 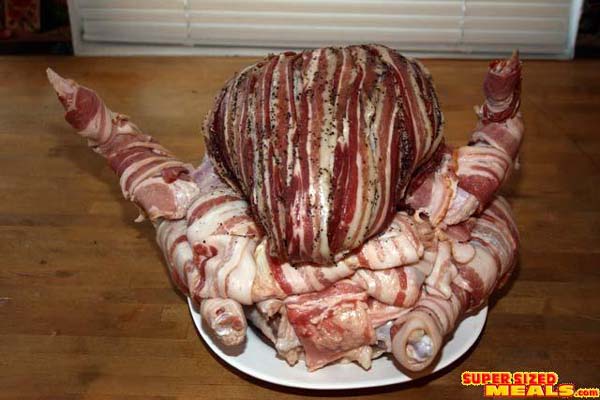 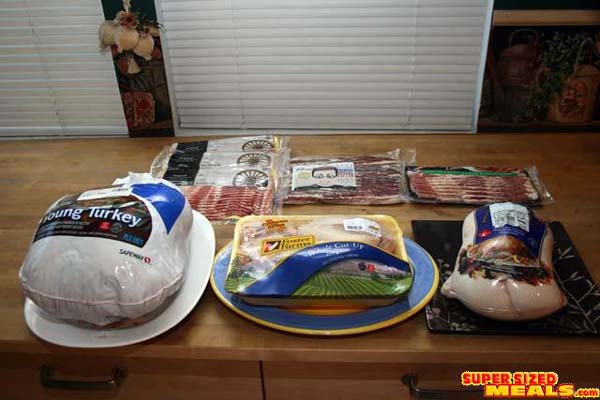 It all started with a dream…and a whole bunch of bacon. Five pounds of bacon to be exact. For some variety we used three types of bacon, including Rocco’s Country Peppered Bacon for the decorative topping. 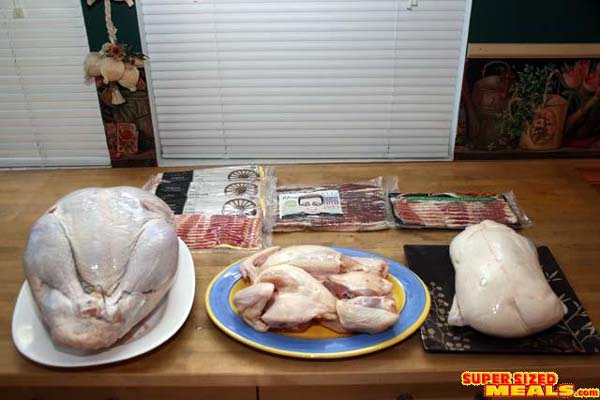 We used a 15 pound turkey, a small duck, and a pre-cut whole chicken. We consulted the internet for a turducken recipe and hoped for the best. 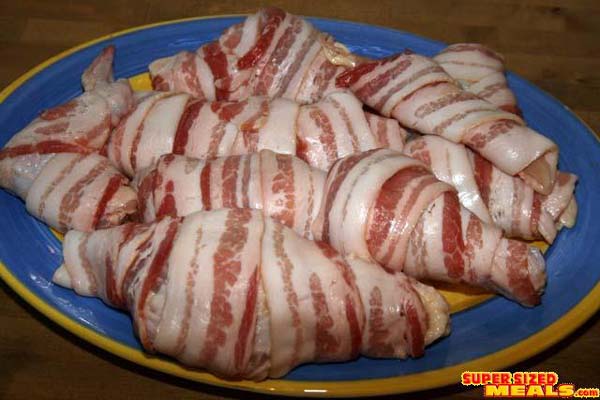 We started by wrapping the chicken pieces in bacon. 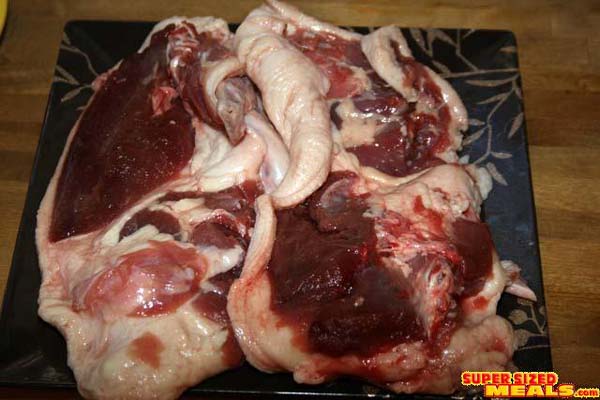 Then we split the duck into two halves… 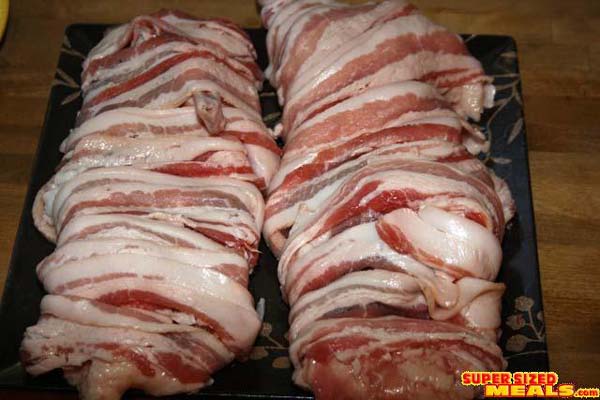 …and wrapped the duck halves in bacon. 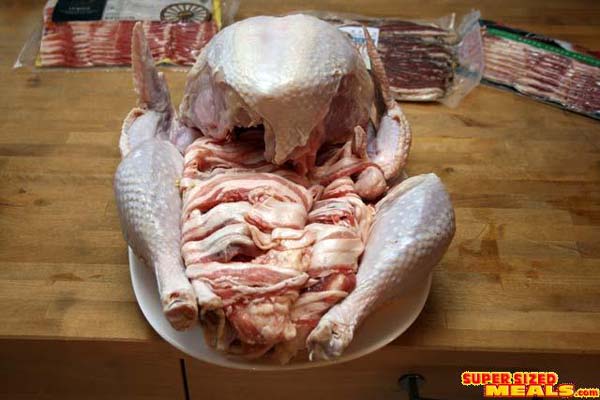 At this point the chicken and duck started looking pretty big, so we test fit the pieces into the turkey. There wasn’t any room to spare but we managed to get all the pieces in there. 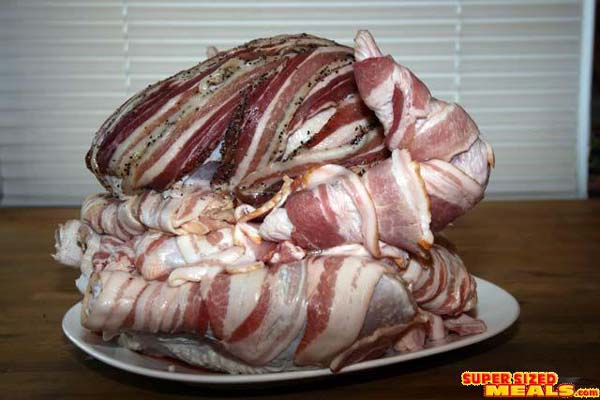 Then we wrapped the turkey in bacon and the feast was ready for the oven. 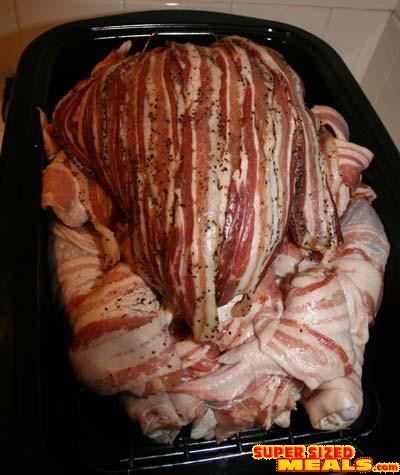 We cooked the birds in a roaster oven on low heat. Cooking took all day but the results were worth the wait. 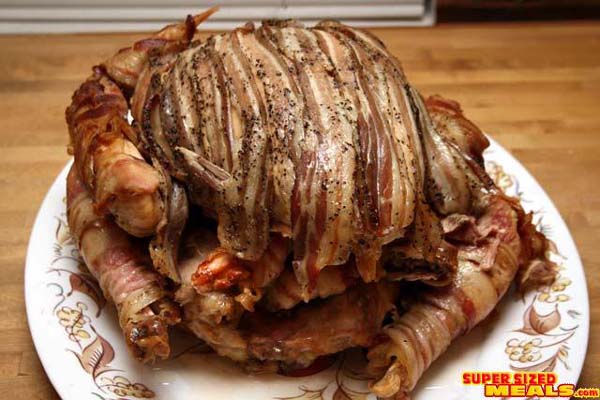 The cooked concoction looked mouth-wateringly good after pulling it out of the oven. 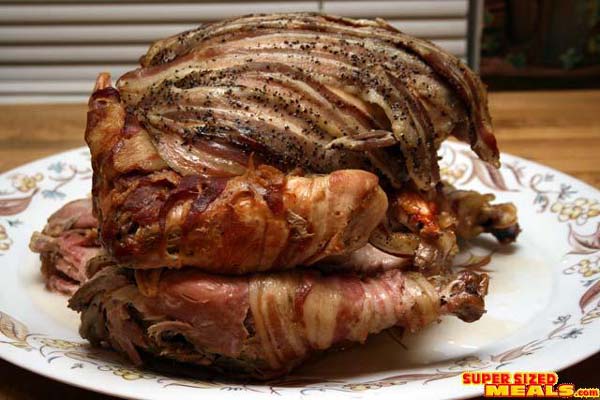 Some of the bacon shifted during cooking, but overall the bacon held together quite well after an entire day in the oven. 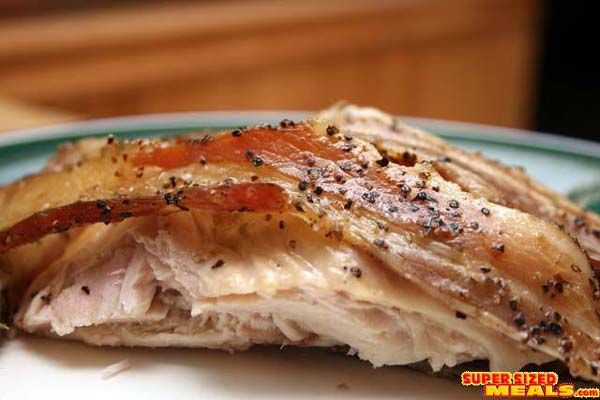 The final product was moist and absolutely delicious. We used no seasoning whatsoever. The bacon gave the poultry just the right hint of salty goodness. The perfect holiday meal for bacon lovers everywhere!


Facebook comments
Turbaconducken (Turducken Wrapped in Bacon) | 0 comments | Create New Account
The following comments are owned by whomever posted them. This site is not responsible for what they say.