Bear Silber got his start in the pizza business by devouring a 20-inch, five-pound pie in just 38 minutes.And as serendipity would have it, the 26-year-old Silber is now part owner of Pizza Party in Santa Clara, the same restaurant where he performed his feat in December 2006. (His record on the "Belly Buster" lasted four days, until competitive eating champ Joey Chestnut did it in 17 minutes.) 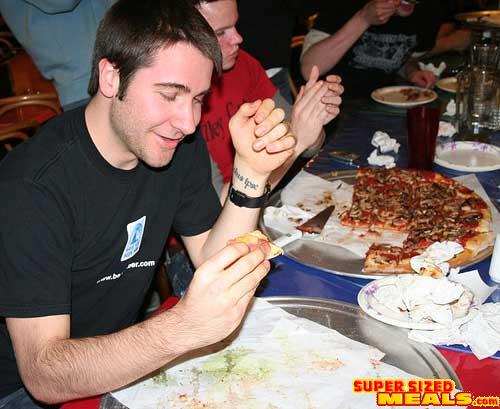 Bear Siber finishing the Belly Buster Challenge
Longtime residents will probably know Pizza Party better by its old name, Pizza & Pipes. The chain was so called because of the pipe organs at its various Bay Area locations, nearly all of which have closed. The organ at the restaurant on Lawrence Expressway and Homestead Road eventually went away, and the name followed suit a few years later.

Silber says he wanted to get into the restaurant business last year, and it was pure coincidence that Pizza Party owner Randy Blair was looking to sell at the same time.

The parlor's a big hit with soccer teams and Silicon Valley companies, but it's also hosted parties for foster kids and other nonprofits. "It's a way we can give back," Silber said.

And if anyone wants to go for the Belly Buster challenge, it's worth a pizza a month for one year if you can finish in an hour (and a $100 bounty if you can beat Chestnut's time). Check out the details at www.pizzapartyonline.com.
| | Facebook comments ()


Facebook comments
Bear Silber Goes from Eats Feat to Pizzeria Ownership | 0 comments | Create New Account
The following comments are owned by whomever posted them. This site is not responsible for what they say.