How do you make your everyday meatloaf awesome? Make it look like a little pig, and wrap it in bacon! That's what carlh did at this years Superbowl party. Here piggy piggy... tasty tasty little piggy...

What was your pigskin pick for the Superbowl? Mine was bacon. Err, long drawn out and ludicrous analogy here: Superbowl ~ football ~ pigskin ~ bacon-wrapped pork loaf. It'll become clear later. Here's the thought. People have been building all sorts of crazy stuff out of the wonder that is bacon, from the lowly bacon-wrapped scallops to the mighty meat house. But has anyone tried to restore a Frankenstein's Monster-like dignity to the pig from which the bacon hails? Probably not, because most people aren't this crazy.

Anyway. On with the Baconpig! 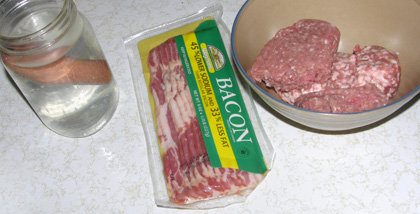 There you go. Oh, yeah, the hot dog is in a jar of hot water, thawing. As pointed out at the Superbowl party, this is going to be like a turducken of pork! A pork-pork-porken, if you will (I will).

Meat is neat. I don't eat much meat, but when I do I make it count. Heck yeah. I took the pork hot dog, encased it in ground pork, and wrapped it in bacon. I crafted an amount for the head and even made little pork feet too! 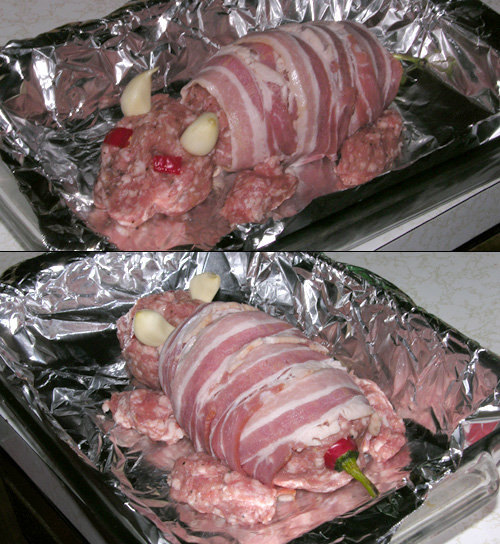 Here's the completed, unbaked bacon pig. Those are whole garlic cloves for the ears, and hot chili pepper pieces for the tail and eyes (didn't have anything curly on hand). Ohhh dang that looks dangerously delicious yet somehow cute. Actually, you know what? He kind of looks like Piglet from Winnie the Poog. Poog? Winnie the Pooh.

After about 40 minutes in a 400ish degree oven (give or take; started at 350 and ending at 450 because we were running late) this is the result. 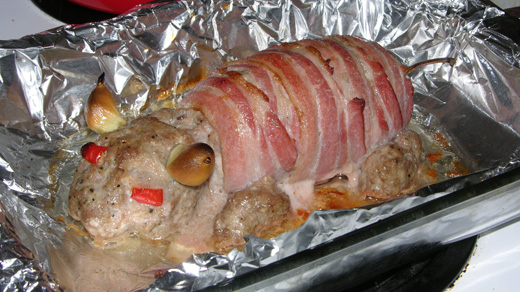 Lovely! The browned garlic cloves kind of look like bull's horns now, but the bacon crisped up beautifully. The pork is cooked all the way through and the hot dog is nice and hot. It's perfect. Oh the smell is amazing - my car smells like bacon, now, by the way. 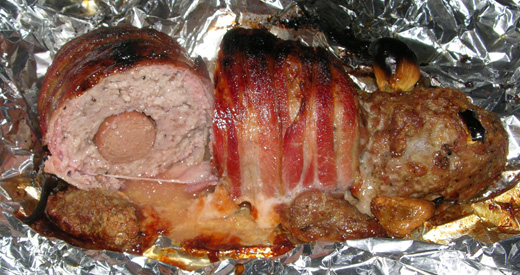 Here's the first interior shot. Isn't that gorgeous? Bacon forms a perfect shell. A skin? A...pig skin? (football, pigskin, get it?) Of course it's greasy but no more than a big slice of breakfast sausage. Slicing it was really easy because of the crisp bacon and firm pork, and it was actually really good on rye bread. 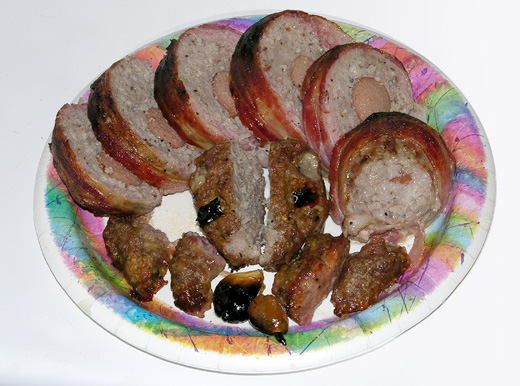 Here's the whole little fellow sliced and plated. The ears were delicious. I'm pleased at how well it went over at the party. Pretty cool looking huh? Actually if you wanted to make this but do it a little less creepy you could easily just make it a log - leave off the head and legs, and bake it on a tray so it drained a little better. The bacon wraps so well and it holds together perfectly. The pork slices clean, too.


Facebook comments
Bacon Pig | 0 comments | Create New Account
The following comments are owned by whomever posted them. This site is not responsible for what they say.