They say a picture says a thousand words. I can think of no picture that holds truer.... This is round 2 for the Wingnuts Hot Wings Challenge (click for previous story). Only one picture in this story, but imho that's all you need...

The response from the first challenge was so overwhelming positive that a second challenge was posted for the following Wednesday but with a bigger pot which now stood at the cost of the wings + $100. Now with a better idea of what to expect, people started posting suggestions to would be competitors to help them gain that edge they needed. From eating hot wax a la Homer Simpson to drinking Pepto-Bismol to peeling the meat off all the wings, then eating them - we had it all.

But who would step up to the plate? All the talkers from the previous week were strangely silent and I began to worry that the 2nd week just might not fly. Luckily for us, Ken wasn’t ready to admit defeat quite yet and was going to try one last time. Would it be as entertaining as the first time? Only time would tell.

Wednesday rolled around and we got to Wingnuts early to secure some tables and eat some (non-spicy) wings. When Ken showed up, we knew he meant business with a tub of yogurt in his hand, baby wipes in a bag and latex gloves in his pocket. We tried to disallow the yogurt on the basis that it’d be cheating, but rules were rules and they said specifically no drinks (they’ve since been amended) so it was grudgingly allowed. 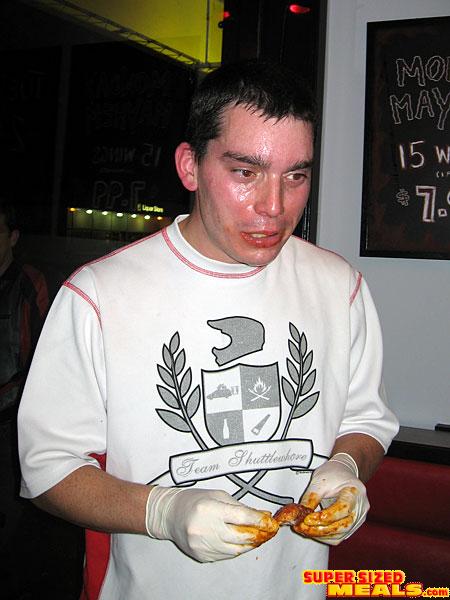 Ken in pain yet again

Ordering in smaller batches, Ken attacked his wings with the same vigor of the previous week as we all looked on. We’d also managed to peer pressure his buddy Paul into joining the challenge so now there were two! Within minutes, Ken was looking haggard though it wasn’t as bad as the previous week.

60 minutes later, he ate his last wing and cheered Paul on as they went on to set a new Wingnuts record beating the previous record set in May of 2005 by one; they’d eaten 87 of Wingnuts’ hottest wings and lived to tell about it.

“I never want to see a chicken wing ever again” - Paul


Facebook comments
Hot Wings Challenge Round 2, Wingnuts, Vancouver, BC | 0 comments | Create New Account
The following comments are owned by whomever posted them. This site is not responsible for what they say.