Glasgow has prided itself on its Supersized cuisine. With creations like the 1000 calorie Stonner Kebab and 60 beer drinking binges, it's no surprise that they've now deep fried an entire pizza. Not a measly single slice, oh no, the entire thing, deep fried. It's funny how all the cheese and ingredients end up floating to the middle! 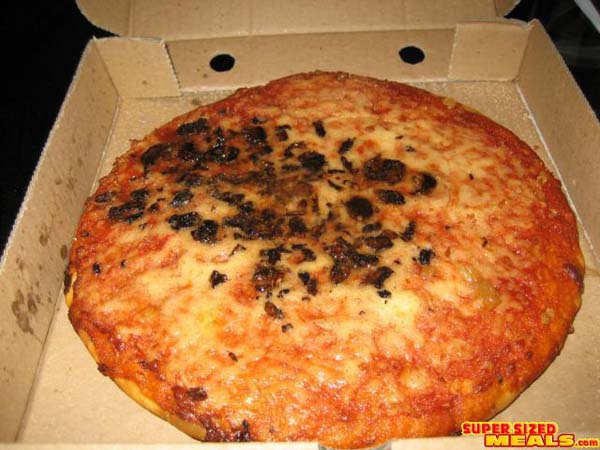 Deep-fried pizza is a dish available in many chip shops in Scotland, most commonly in the east. It originated in the late 1970s and typically consists of the cheapest of cash and carry pizzas, though a choice of “toppings” is often available, usually plain (cheese and tomato), mushroom or onion. Served as a “Pizza Supper” (with chips) or single (without chips) in whole and half pizza portions. A common accompanying beverage is Irn-Bru, a violent orange carbonated soft drink, rumoured to be “made from girders”.

Whole pizzas can be served, cut in half with chips in the middle, creating a pizza and chip “sandwich”.

In the east coast of Scotland they can be served with “Salt and Sauce” — with the pizza smothered in brown sauce (seemingly a mixture of HP sauce and vinegar) before being folded in half.

This pizza is deep fried without batter, although another variation known as a “Pizza Crunch” consists of a large, battered slice of pizza deep fried, usually served with chips.


Facebook comments
Deep Fried Pizza, Shawlands, Glasgow | 1 comments | Create New Account
The following comments are owned by whomever posted them. This site is not responsible for what they say.
Deep Fried Pizza, Shawlands, Glasgow
Authored by: Anonymous on Thursday, October 25 2007 @ 05:02 am UTC
Scots are stunninggly stupid and ugly.
[ Reply to This | # ]