What is a Munchy Box?
Contributed by: Billy

Scotland is well known for its heart-stopping cuisine like the Stonner Kebab, and this is no exception. It's "The Munchy Box", no doubt only edible when you've got "The Munchies". It's a 10"+ Pizza box filled with every possible thing you could deep fry, and I do mean filled up. Chips, Onion Rings, Meat, Pakora. Hope you're hungry!

In the west of Scotland, in the towns and villages surrounding Glasgow, there is a delicacy available in some of the more discerning fast-food outlets. It’s called the Munchy Box (sometimes just Munch Box) and it’s a sight to behold. The one I bought for this article is a regular-sized one, in a 10″ pizza box for about a fiver, but they can come in 12″ or beyond for eight quid and up. 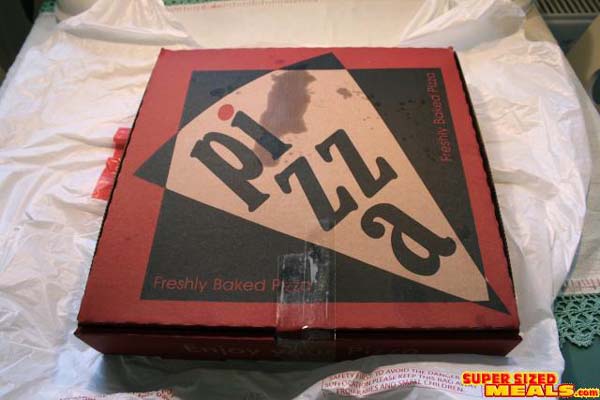 Upon opening your Jock Monsieur, you will see a layer of Doner Kebab meat on top of a Naan Bread, maybe with some Glasgow Salad (chips) poking out from underneath. The wonders that await!

Once the top layer has been removed, you can clearly see the two tubs of Sauce, the Glasgow Salad on the left and the Crappy Salad in the middle with the Onion Rings, Pakora and Chicken Tikka all huddled together for warmth on the right. 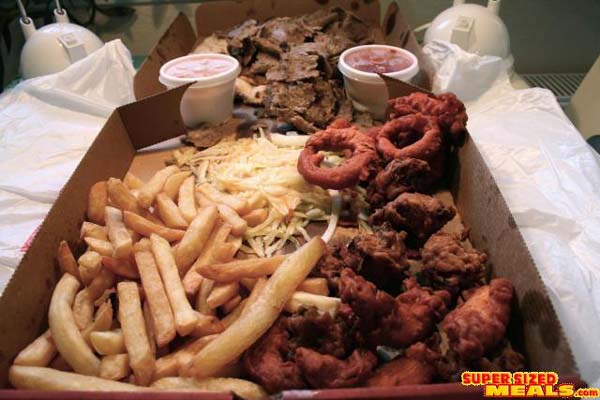 As a serving suggestion, I’ve laid it out with the crappy salad atop the chips, a piece of chicken tikka balanced on top of the salads, an onion ring surrounding a piece of pakora, a wall of doner meat served with a feuille of naan with a choice of two sauces. Sparkling Italian rosé replaced the traditional Irn Bru, but purists be damned! 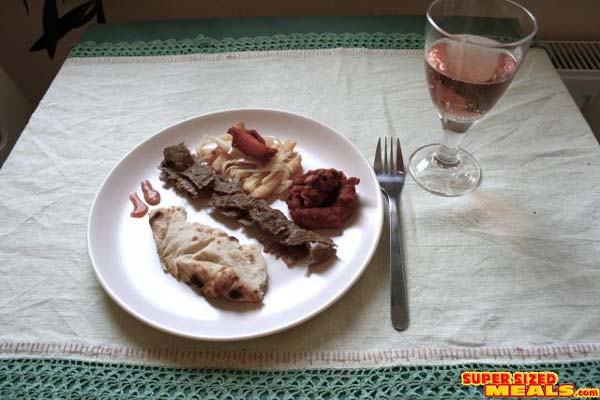 Or, alternatively, you could just shovel half down your Tennents-lined gullet whilst dropping the other half (crappy salad deliberately, the rest less so) on the pavement.

Next time, I may brave the hallowed Pizza Crunch Supper for your delection. With a half-pizza deep fried in chip-shop batter and piled on a wodge of chips, it truly is the champion of the artery-hardeners.