OTCA does the Cheeseburger Pizza
Contributed by: Billy

Not one to be satisfied with just a Super Whopper, a Super Aussie Burger and a Super Triple Bacon Deluxe Burger, Griffin decided to delve into the world of Italian Fusion Cuisine. Behold, the Cheeseburger Pizza. Sure, you've seen it before, but the Cheeseburger Pizzas are better at Hungry Jacks!

This was the first item I started on. I bought a frozen pizza (Double beef and bacon) instead of a plain pizza base, to give it a little extra flavour. Placing four Cheeseburgers on each quarter, I filled in all the spaces with the chicken nuggets, fries and onion rings. The problem with spacing out the burgers was that it was more difficult covering it all with cheese. I didn't have that problem the day before because there was a lot less stuff on the pizza to cover.

Cut open, with a slice placed on top. 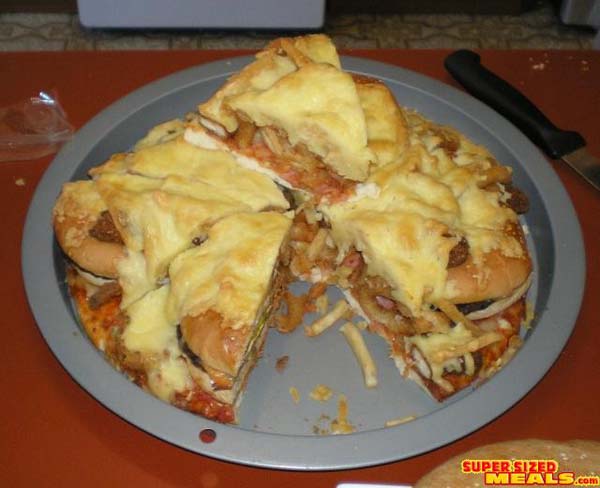 And showing a cross-section of a Cheeseburger inside. It was still very tasty though, but could have used less cheese and more ketchup (I think I had added it to the pizza the day before, which would have made it less dried out and cheesy).


Facebook comments
OTCA does the Cheeseburger Pizza | 0 comments | Create New Account
The following comments are owned by whomever posted them. This site is not responsible for what they say.